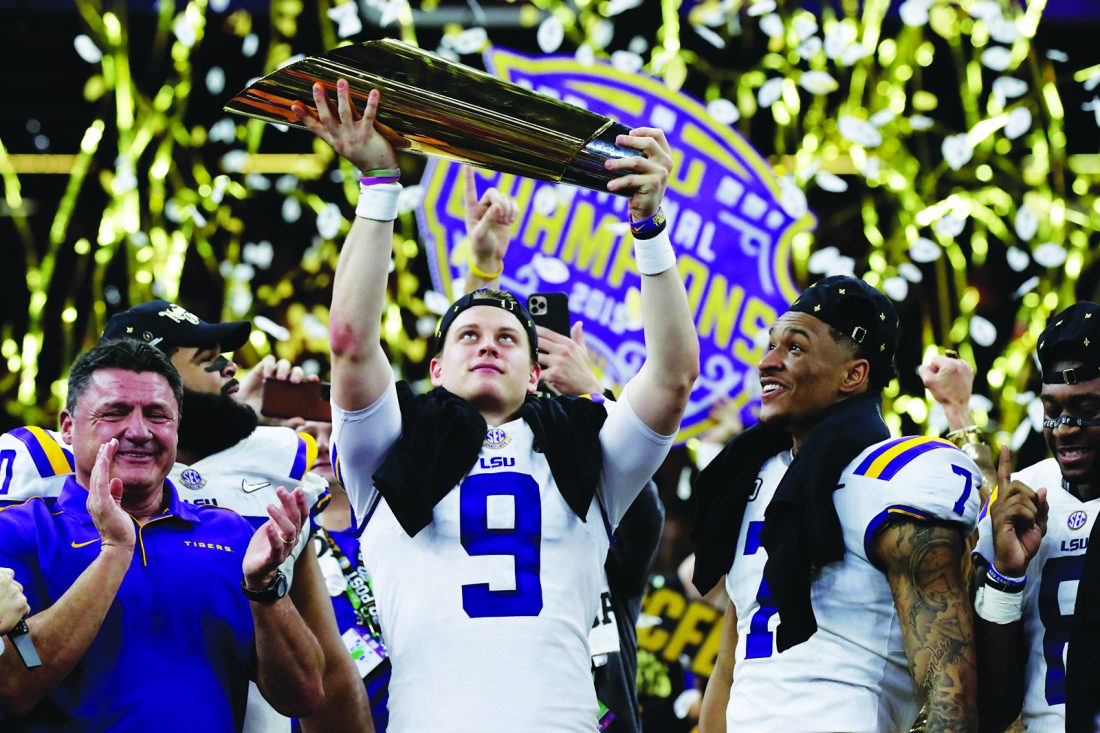 COLUMBUS, Ohio (AP) — Joe Burrow was a competent if unspectacular quarterback as a backup at Ohio State and during his first post-transfer season at LSU. In 2019, he transformed into Super Joe.

Imagine if a pandemic had shortened or wiped out that last, golden season for Burrow, who won the Heisman Trophy and led LSU to the national championship. Would he still have emerged as the first overall NFL draft pick who is now being hailed as the savior of the woeful Cincinnati Bengals?

These times have brought an extra level of anxiety for current college players hoping for a Burrow-like season or at least one that will raise their profile with NFL scouts. The virus threat did away with spring football and in-person workouts on campus. And nobody can say yet what the 2020 season will look like, or if there will be one at all.

“It’s a nightmare, to be honest with you,” said Ohio State’s Josh Myers, a second-team All-Big Ten center last year and an NFL prospect. “That’s time we can never get back.”

“It’s a critical (year) for development, getting that much more experience and elevating our games to an even higher level,” said Myers, a fourth-year junior. “So even the thought of not playing this season is terrifying and absolute worst-case scenario.”

There are examples all over the NFL of how important one college season can be. Dwayne Haskins Jr. — who beat out Burrow as the starter at Ohio State, leading Burrow to transfer — went from backup to one-year superstar in 2018. He threw for 50 touchdowns and led the Buckeyes to a 13-1 record and Rose Bowl victory. The 15th overall pick in the 2019 draft, he is now the presumptive starter for the Washington Redskins.

For Burrow’s part, he acknowledged becoming a different and far better player in one year.

“I wasn’t very good my junior year,” he said. “You know, it’s pretty simple. I worked really hard to get better.”

Burrow didn’t have the challenge of being sheltered at home for a long stretch, missing spring practice and being left to his own devices to work out, eat right and study film in preparation for a season that might not happen.

Penn State tackle Will Fries announced in December he would return for a fifth year, long before the pandemic changed everything. He insisted he doesn’t regret the decision.

“I mean, there’s nothing I can do about it,” said Fries, who was All-Big Ten honorable mention in 2019. “At the end of the day, I can’t worry about it. All I can do is just get myself better every day.”

Myers and fellow Ohio State lineman Wyatt Davis, an All-American who passed up the draft to come back for a fourth year, are unequivocal about their need for a 2020 season, whether it involves playing in empty stadiums, extreme quarantining and even signing a waiver of liability.

“I was looking so forward to this season, because I felt like last season I was just barely breaching the surface,” said Davis, the grandson of late Pro Football Hall of Fame defensive end Willie Davis of the Green Bay Packers. “I know this is a very big year for me.”

Since shutdowns interrupted spring football practices in March, coaches around the country are trying to stay on top of their squads with video meetings and calls. Still, it’s mostly left to players who are 18, 19 and 20 years old to keep themselves in game shape and act right.

“When you lay in bed (at night), you’re just like, oh I hope everyone is doing what they’re supposed to do,” he said.

College football teams typically start preseason workouts in early August. Some Power Five schools, including LSU, are making plans to reopen their on-campus facilities to players next month without a firm plan in place to bring students back to campus this fall. The NCAA says campuses will have to be open before fall sports can commence.

Mike Hart, Michigan’s all-time leading rusher who now coaches running backs at Indiana, thinks players who ultimately have the mental toughness to play beyond college will get there and be ready to play whenever the opportunity arises.

“If you want to play in the NFL, this is really an NFL schedule,” said Hart, who spent three seasons with the Indianapolis Colts. “This is what it’s like. You train on your own. You have to be on your own.”