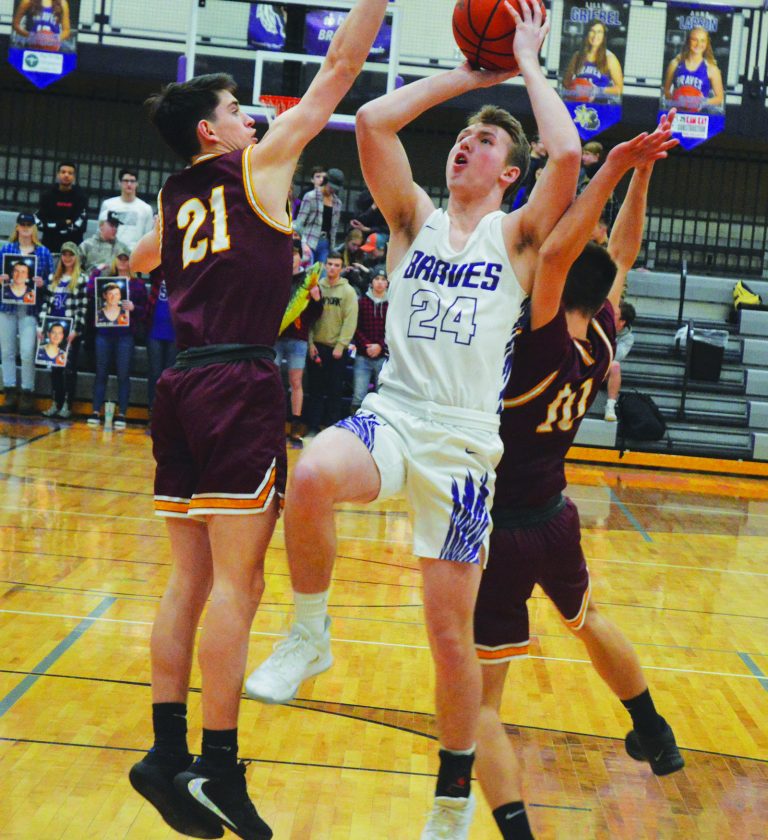 GLADSTONE — When three players score 20 or more points in a basketball game, the chances of your team winning are usually pretty good.

The Gladstone boys accomplished that here Friday night, but dropped an 84-76 decision to the Menominee Maroons.

Outside shooting made the difference for the Maroons in this Great Northern Conference match-up as they drained 11 shots from 3-point range.

“That’s a good team,” said Braves’ coach Dane Quigley. “They’re fast and they have shooters. It’s hard to get anything positive with them. We had the lead in the fourth quarter and needed to get a turnover or grab a rebound. It takes the wind out of your sails when you get a lead and they hit a 3. I’m proud of our guys. I thought they played well.”

The Braves took a 68-66 lead on a steal and layup by Cam Ballard midway through the fourth quarter.

Senior Brock Barrette then sank a jump shot from the left corner to give Menominee a 69-68 lead and a putback by senior Keagan Monroe by them up by three points with three minutes, 29 seconds left to play.

Gladstone came within 71-70 on its next possession before Menominee surged to a 76-70 advantage on a pair of free throws by Monroe at 2:15.

Noah Ballard pulled Gladstone within 76-72 on a 15-foot jumper with less than two minutes left. The Braves, however, were unable to get any closer.

“Barrette and (Brady) Badker came up with some shots from the perimeter at big moments,” said Menominee coach Sam Larson. “I’m proud of these guys for stepping up and knocking them down. We knew the Ballards and Castor were the guys we had to stop, and we didn’t do a very good job of it. We’re happy we scored 84 points, but not happy we gave up 76.”

The Maroons then opened the third quarter with a 10-2 run, gaining a 42-30 advantage on a layup by Monroe.

“In the locker room (at halftime) the feeling was our intensity wasn’t what it should be in the first half, but we came out with a lot of fire in the third quarter” said Larson. “We’re happy with the way we came out of the locker room. Gladstone has a good team. Defending the Ballards and Castor is no easy task.”

The teams then see-sawed for the next four minutes prior until the Maroons went ahead to stay on Barrett’s corner jumper.

“They shot well from outside,” said Quigley. “We struggled with scoring in the first quarter. We couldn’t get the shots to drop.”

The Braves, who trailed 15-5 late in the opening frame, committed 13 turnovers. The Maroons had 21 miscues.

Monroe paced the Maroons with 27 points. Bellisle hit 17 and Barrette finished with 12.

“In the first half, Keagan missed some opportunities,” said Larson. “He was a lot more aggressive in the second half. Keagan is very athletic and he uses it to his advantage.”