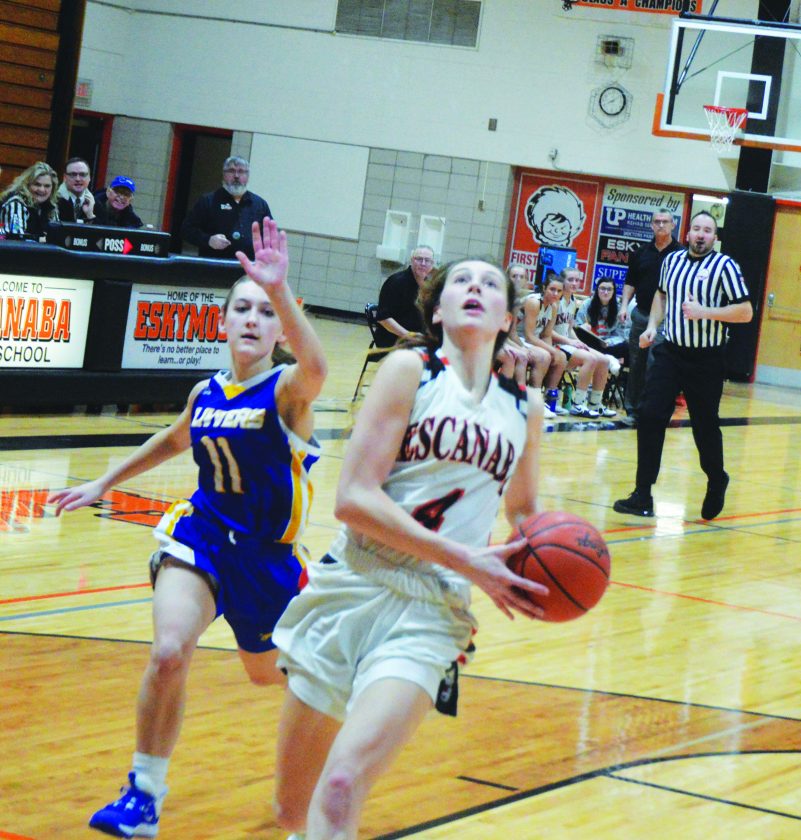 ESCANABA — In a matchup of a pair of fairly evenly-matched Great Northern Conference teams just trying to do the same thing, one thing separated the Escanaba Eskymos from the Kingsford Flivvers — Nicole Kamin.

With both teams playing zone defenses and trying to beat the other down the court before the defense could get set up, Esky’s 5-foot-11 junior forward poured in 25 points, 14 rebounds and three steals to lead the Eskymos to a 56-46 girls basketball win Thursday night in Escanaba.

“She deserves to be talked about. I don’t think she came out the whole game, and that kid’s heart and soul is into basketball,” Esky coach Mike Beveridge said. “She’s tougher than heck to stop … sometimes she tries to do too much, and yet I can’t tell her no because she makes so many good things happen. She does more good at making things happen than she does hurting us.”

With the Flivvers (3-6, 0-3) in a 3-2 zone, Esky pushed the pace and was able to get out in transition for some easy buckets in the first half.

“We didn’t stop the transition well enough in the first half,” Flivvers coach Lisa Harry said. “We did a better job in the second half, but then we gave up some offensive boards that were hurtful and we put them to the free throw line too many times.”

The Flivvers remained within striking distance the whole night, pulling within 31-28 on a layup by Maggie Strehlow with 5:23 left in the third quarter.

However, Esky answered with an 11-3 run capped by a corner triple from Anna Smith with 53 seconds left in the period.

The Flivvers pulled within seven points a couple times in the fourth quarter, but Kamin scored nine points in the period to help the Eskymos hang on.

Strehlow had a solid performance for the Flivvers, finishing with 16 points, five rebounds and two assists. Kate Cook added a double-double with 13 points and 11 rebounds, while Ali Doolittle chipped in 10 points and six boards. Kriegl was limited in scoring but contributed eight assists and three steals.

“I liked the way we passed the ball really well against their 1-3-1 defense and created some good looks, good passes and good shots for our bigs. Our three bigs had double figures, so they did a nice job there,” Harry said. “I was fairly happy with our defense, it was just (about) not making enough shots. Brooke was a little off tonight. I think if a couple more shots go in, it could have been a different story.”

Esky is scheduled to play at Gaylord St. Mary Saturday, but that could change depending on the weather forecast. If the Eskymos don’t play Saturday, their next game is Monday at top-ranked Menominee.