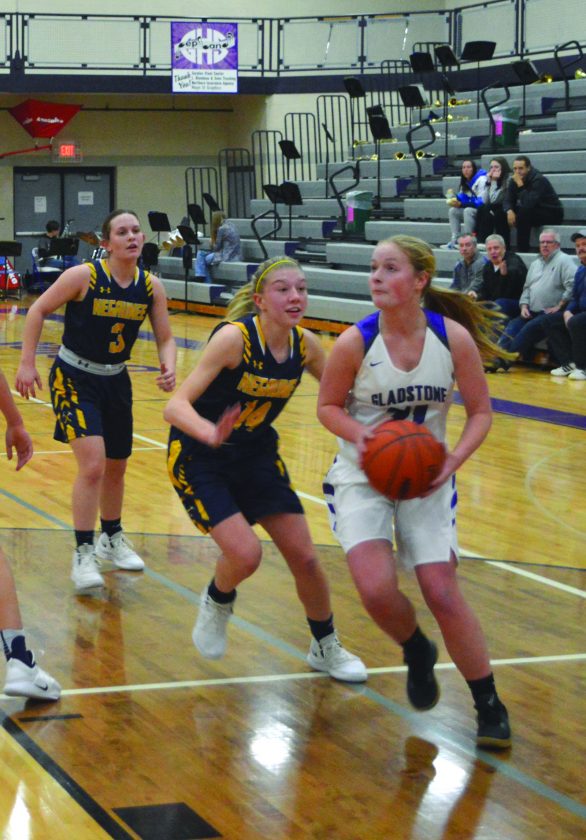 GLADSTONE — The longer you let an underdog hang around the neighborhood, the more dangerous that dog becomes.

The Gladstone girls showed just how true that can be Tuesday night as they upset the second-ranked Negaunee Miners 43-39 in a Mid-Peninsula Conference basketball contest.

Although they trailed by 15 points early in the third quarter, the Braves proved they were never really out of this one by coming back to secure the decision on a pair of free throws by sophomore guard Alaina Trudeau in the final 1.2 seconds.

“We talked about playing every second of the game and our girls didn’t quit,” said Braves’ coach Andy Cretens. “Tonight we showed we can be a gritty and tough team. The girls did a fantastic job being patient and finding the open girl, and I think our defense took away what they liked to do. The girls did a great job following the game plan.”

The Braves, who trailed most of the contest, took a 40-39 lead on a running jump shot from the lane by junior guard Maddie Ahlgren with 16.9 seconds left to play.

Ahlgren added a free throw with 2.4 seconds left and missed the second. Trudeau got the rebound and was fouled, setting up her game-clinching gifters.

Negaunee led 36-30 following a buzzer-beating 22-foot set shot from from the left wing by senior forward Abigail Nelson at the end of the third stanza. The Miners, however, managed just three points in the fourth.

“We just went a little flat,” said Negaunee coach Brandon Sager. “We had a couple girls sick this week, although that’s not an excuse. It came down to digging in. We mixed a couple defenses because of the lineup we had, but didn’t make the plays we needed down the stretch. I thought we moved the ball around pretty well. But when you put up only 36 shots and hit 4-of-10 free throws, you’re not going to win very many games. Glve Gladstone credit. They have good athletes plus a premiere post player.”

The Miners threatened to break open the contest, gaining a 30-15 advantage on a jumper from the boulevard by freshman center Alyssa Hill early in the third frame.

Gladstone responded with a 15-3 run, climbing within 33-30 on a set shot from top of the key by Ahlgren late in the third.

“Megan did an awesome job in the middle,” said Cretens.

“She has a high basketball IQ and has become a great leader for us. Maddie did a fantastic job on (Hannah) Voskuhl and Andie (Belanger) did a phenomenal job on Nelson in the second half. We wanted to take down one of the best teams in the U.P. and put ourselves on the map. We want to enjoy this one, but we can’t relax. We have another big game Friday.”