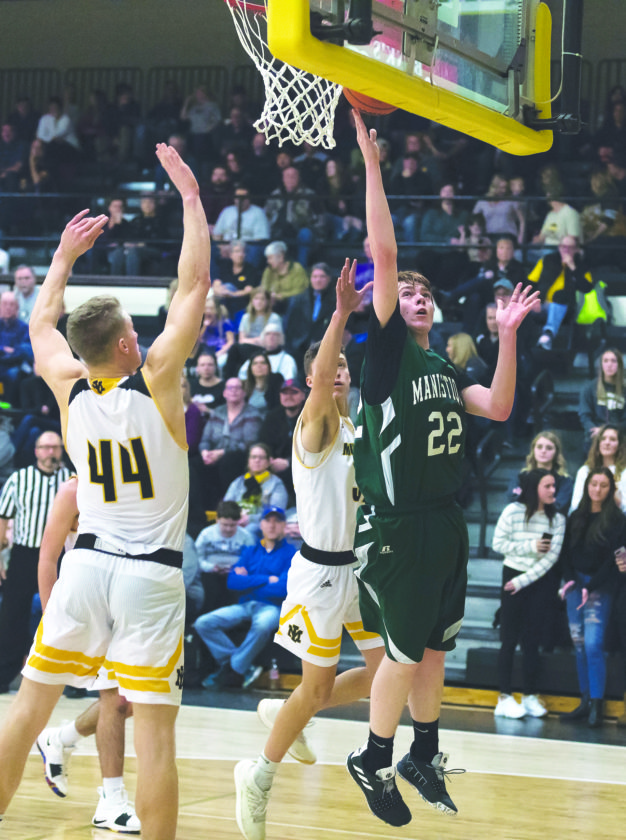 Johnson reached the milestone in the final minute before halftime with a free throw. His father and head coach Bucky Johnson substituted him after knocking down the free throws. Marcus came to the bench and hugged Bucky, his grandfather Rick Olds and shook his teammates’ hands.

“It was awesome. Just getting to see that, having my dad and grandpa as coaches is probably one of the greatest thing that I’ve ever been blessed with because they’ve been with me for forever,” Marcus Johnson said.

“I want to do my best for them always. My grandpa, he’s quiet, but behind closed doors he’s more energetic and he wants me to be as great as I can be. They’re not about me — they’ve always taught me it’s about the team — do what’s best for the team.

“It was kind of surreal actually to come off the court. My dad subbed me out. I gave him a hug. It was one of the greatest moments of my life up to this point.”

Johnson finished with 24 points to put his career total at 1,006 points. Foster Wonders led the Mountaineers (3-0) with 28 points.

Iron Mountain got off to a quick lead, knocking down four 3-pointers in the first quarter to take a 24-11 lead going into the second. Johnson ended the game with six triples while Wonders had four. Colin Visintainer hit the other triple.

“We got off to a good start offensively. We moved the ball,” Coach Johnson said. “We hit a bunch of 3’s in the first stretch of the game. Marcus hit a couple, Foster hit a couple. We had a good first quarter as far as scoring. I thought we got up the floor when we got a defensive rebound. We got off to a good start on offense. Manistique’s a good team. They played hard throughout. It was overall a good night. Everybody got to play and that’s the first time this year that happened. I really liked the hustle out of Jake Dumais and Owen Caudell. They do some things out there that don’t show up in the box scores but are important for our team. That was nice to see.”

Manistique head coach Bill Boddy, a 2010 Iron Mountain graduate, said the focus for his team was to improve over a loss in the season opener to Gladstone last week.

“We just worried about ourselves. We know who they are and we know they’re really good, big, fast, strong,” Boddy said. “Our goal was to be better than Thursday and we did that. We scored some points tonight and we scored some points against a better team defensively. They’re big, they’re long. We put up 48. I think last week we put up 27 or 29. It was an improvement.”

“Obviously you know that it’s a milestone — a thousand points. Not a lot of people do that,” Coach Johnson said. “We didn’t really give it a lot of thought. He’s a junior, it’s his third game of his junior year. We kind of knew he was going to get it eventually. Just so happened to be tonight. You don’t want to make light of it but yet it’s a great accomplishment. Marcus is fortunate. He’s played with a lot of great players. Marcus puts a lot of time into the game. He’s passionate about it. He’s growing, he’s maturing. It was nice to get it at home here tonight and get that out of the way, so to speak.”

Aside from Johnson’s hugs and handshakes on the bench, Mountaineers athletic director Joey Pontbriand announced the achievement.

Johnson and Wonders were waterboys during Boddy’s years on the Mountaineers’ varsity basketball team.

“I didn’t know it was coming,” Boddy said of the achievement. “Actually I would’ve guessed he already had it. It was cool. Joey told me midway through the first quarter it was going to happen. It was cool, you know. I’ve known Marcus since he was a baby. It’s fun to see. I’ve seen him put hours and hours and hours in the gym since he could walk. Hard work pays off. I’m rooting for him.”