No. 5: Jets rally to complete season sweep of Rockets 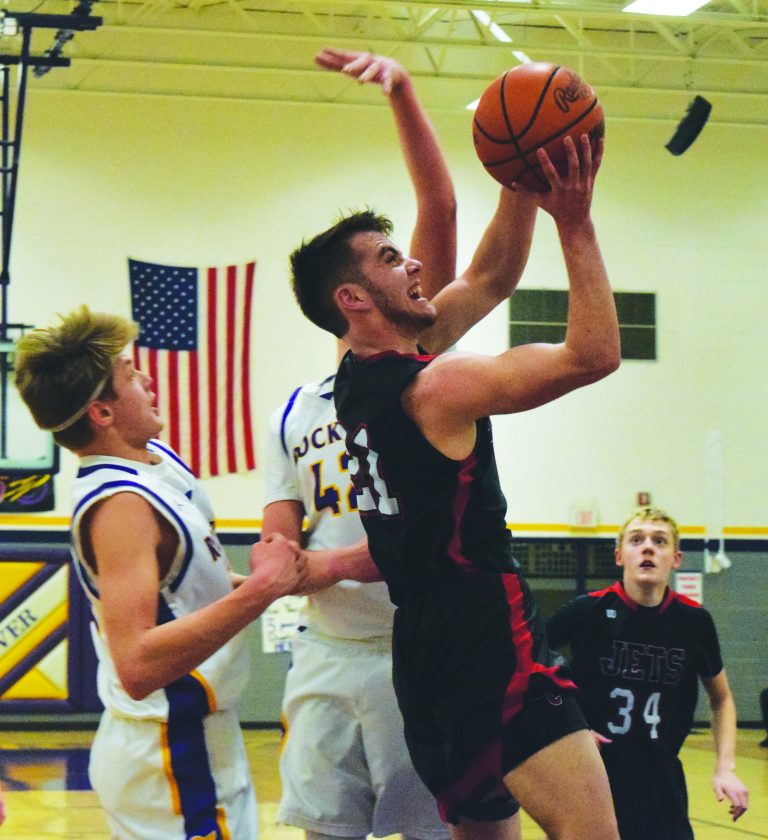 RAPID RIVER — The Rapid River boys were on a four-game winning streak, and they were faced with a home game against North Central on Feb. 11. The Rockets fell to the Jets 66-54 in their previous meeting Jan. 20, and they were looking for some revenge.

In the first half, it looked like the Rockets might be on their way as they led 25-18 at halftime.

However, Jets’ freshman sensation Luke Gorzinski poured in 28 points to help them earn a 60-55 comeback victory in the final minute of the fourth quarter and complete the season sweep over their Skyline Central Conference rival.

The Gorzinski legacy was on full display during the game to cement the freshman as one of North Central’s premier playmakers.

“I put a lot on (Luke’s) shoulders,” Jets coach Mike Malone said after the game. “I expect him to defend the best player, all game, nothing but full court man-to-man, be my point guard, be cerebral, run the offense and score 20. That’s a big task. He plays every facet of the game. He’s a really good all-around basketball player.”

The Rockets led 19-8 at the end of first quarter before the Jets started to crawl back in it in the second.

“We started out well,” Rockets coach Mitch Hall said. “We wanted to dictate the start of the game for once, and the guys came out ready to play and intense. Our rebounding was pretty good. I think we limited them to one shot, and I thought their shots were a little rushed. We contested them, and we rebounded well. We kept (Luke) Gorzinski from driving, and those were the biggest differences I saw from the first half to the second.”

The Jets displayed new energy in the third quarter, rallying to tie the score 36-36 entering the fourth.

“Desire (is what changed in the second half),” Malone said. “We had a lot more desire. Our tenacity and getting after loose balls, rebounding, going to the rim and trying to create lanes for our offensive rebounders. It was just desire to win. Our desire in the first half was one pass, a shot and let’s just stand around and watch. I think that was one of the biggest changes.”

North Central pulled ahead in the beginning of the fourth, but the Rockets’ Tony DeMars tied it 48-48 with 4:40 left.

It was back-and-forth until four straight points from Gorzinski put the Jets ahead 54-52 with two minutes to go.

Shortly after, Gorzinski buried a pair of free throws to give North Central some room with less than a minute left. The Jets forced a stop, and Noah Gorzinski hit 1 of 2 free throws to make it 57-52.

Max Lenaker sank a 3-pointer to cut the Rockets’ deficit to 57-55 in the final seconds, but North Central’s Cole Timblin sealed the win with a pair of free throws with less than two seconds left.

“The two free throws to close it from Cole Timblin were absolutely huge,” Malone said. “He struggles sometimes at the line, and he laid them in perfectly tonight. I was really, really proud of him.”

Despite the loss, Hall felt his team performed well.

“I don’t know what we would do different,” he said. “It was a heck of a game, and it was close until the end. If we hit a few more shots or get a few more balls to bounce our way, we might win that game next time.”

Noah Gorzinski and Brien Gronmark had 13 points each for the Jets.

The Rockets were led by Lenaker with 16 points and four triples, while Tyler Sundling and DeMars followed with 12 points apiece.