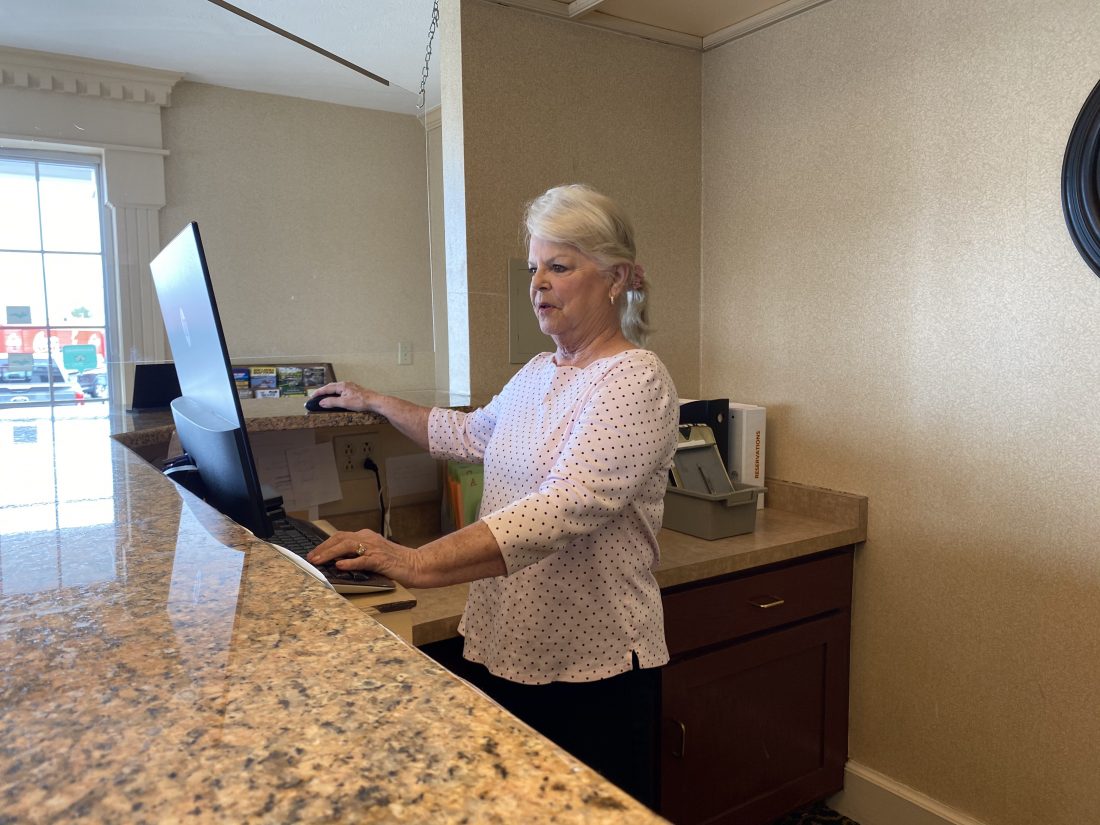 Jordan Beck | Daily Press Merrie Bea Stankowicz, owner and manager of the Magnuson Grand Pioneer Inn and Suites in Escanaba, works behind her hotel’s front desk Tuesday. A number of events set for the spring and summer months have been postponed and canceled due to the coronavirus pandemic, which has had an impact on some local businesses.

ESCANABA — A number of local events set for the spring and summer months have been postponed or canceled due to the coronavirus pandemic. Representatives of area businesses spoke about the role events play in Delta County’s economy and what impact thier absence will have.

“When the state of emergency was first declared, several events that were planned for early in the spring were postponed rather than cancelled until it became apparent that the Stay Home, Stay Safe orders would not be lifted early enough to allow for proper planning and execution of the events,” Delta County Chamber of Commerce Executive Director Vickie Micheau said.

Among these events were the Krusin’ Klassics Fun Run and the Home and Garden Show and Pancake Days.

Additionally, some events set for later in the season — including the U.P. Trappers Convention/Outdoor Expo and the One Church Festival in Escanaba — have been canceled. A golf tournament previously set to visit the Sweetgrass golf course in Harris this June may still be able to do so later in the year.

“The Island Resort Championship Committee and the Symetra Tour postponed the LPGA tournament and are looking at possible dates in the future that may open up to still hold the tournament during the 2020 circuit,” Micheau said.

According to Micheau, event organizers have been deciding if and when to cancel their events based on the time and planning that would still be needed before they could successfully be held.

“Planning an event during the Stay Home, Stay Safe order has been difficult because face to face contact to make final arrangements with sponsors, vendors and participants is helpful and often necessary,” she said.

As the chamber maintains an up-to-date community calendar, Micheau said it is aware of and involved with many events.

“Organizers will give a courtesy call to the Chamber if an event is canceled or postponed so the calendar can be updated,” she said.

Event cancellations can impact Delta County’s economy in a number of ways.

“Larger events draw enthusiasts to the area who might not otherwise spend time or money here. Local businesses take advantage of promotional opportunities when they sponsor events,” Micheau said.

She noted non-profit organizations that rely on events to support their work have been negatively affected by having to cancel these events, as well.

Among the businesses that have had to deal with event cancellations have been local hotels. At the Quality Inn & Suites, General Manager Andrew Rasch said summer is the hotel’s busiest time of year.

“Those three or four months out of the summer period is where you really make or break your business,” he said.

However, Rasch noted the local economy has become less reliant on events in recent years. Instead, much of Delta County’s recent tourism traffic has been based on its centralized location in the Upper Peninsula, which allows it to serve as a “hub” for people visiting the region.

“We tend to be more of the gateway to the U.P. from the Wisconsin area,” he said.

Still, on days major events are being held in the area, Rasch said approximately 60 percent of hotel traffic comes from people involved with these events in some way.

Merrie Bea Stankowicz, owner and manager of the Magnuson Grand Pioneer Inn and Suites in Escanaba, said business has been down significantly as a result of COVID-19.

“I think people are being very, very careful and cautious, and for good reason,” she said.

According to Stankowicz, “maybe 30 percent” of business at her hotel during the summer is event-related. Despite this loss of business, she said she understood why event organizers have decided to cancel events.

Some local restaurants also see business spike significantly during the summer months as a result of tourism.

“We would probably see a doubling in business (the) weekend of an event,” he said.

Culver’s in Escanaba sees its biggest sales of the year during the summer months. General Manager Brian Chilcote said events play an important role in driving this traffic.

“I think those are incredible factors helping us out,” he said.

However, even with event cancellations starting to have an effect locally, Chilcote said traffic at Culver’s has actually increased.

“I think people are just tired of being inside and not having any options at this point,” he said of a possible reason for the increase.

At local gas station ECO Fuels, business goes up about 30 percent between the end of June and August.

“Without those events, it’ll be hard to foresee those increases right now,” Manager Paul Carne said.

Still, Carne said he is hopeful that travel by people locally and from Wisconsin over the summer could help offset the cancellation of events.

“We’re going to play it by ear. It’s a new experience,” he said.

In support of organizations affected by canceled events, the chamber has been working to help event organizers set up dates and locations for future events.

Currently, the chamber is working under the assumption that the U.P. State Fair will be able to take place in August.

“We will work alongside local, state and federal authorities to assure a safe and healthy plan is in place for the 2020 U.P. State Fair,” Micheau said.

“The ‘roadmap’ solicits involvement and input from local partners so an acceptable plan will be ready long before the gates open on August 17,” she said.

ESCANABA — As a new surge of COVID-19 cases make their way across Michigan and the rest of the United States, ...

ESCANABA — An additional COVID-10 case was reported in Delta County by the state of Michigan Monday. State ...

ESCANABA — After the recent announcement that the U.P. State Fair has been postponed until 2021, Delta County ...

Hair cuts. Massages. Tattoos. Pedicures. Manicures. These were just some of the luxuries lost as businesses faced ...

ESCANABA — Many Delta County voters will have an opportunity to determine the future of funding for Delta Area ...