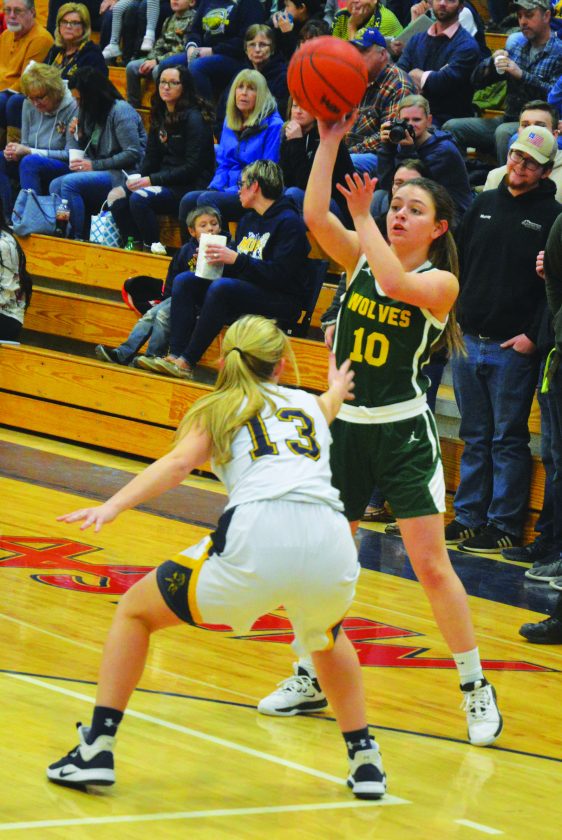 HARRIS — At the time this game was played back on Jan. 10, nobody knew the Carney-Nadeau girls were going to be in the early stages of a 14-game winning streak.

Early in the season, this game was considered a coin flip. What it ended up being was an early showcase of just how good the Wolves can be.

Sandra Boulton poured in 20 points and Tessa Wagner added 12, as the Wolves’ size in the front-court was the difference in their 49-44 overtime win.

“Tessa created some match-up problems for us,” BR-H coach Matt Richer said after the game.

“She had one block in overtime that pretty much sealed the game. We had wide open, uncontested layups, but the girls were still looking for her. She affects what you want to do.”

But the Broncos responded in the second half, taking a 35-29 lead on a layup by Riley Arndt late in the third quarter before Boulton knotted the score at 35 early in the fourth.

After Boulton gave the Wolves a 41-38 advantage with 67 seconds left, Cara Zawacki drilled a 3-pointer from the right wing to force overtime.

Arndt gave BR-H a 44-43 lead with just over two minutes left in the extra session before Boulton scored again to put C-N back in front. Giselle Laurila, who added 11 points in the victory, then sealed the game by hitting four free throws down the stretch.

“It was a well played game,” C-N coach Ken Linder said. “It was a game of runs. During the break (after regulation), we told the girls we just needed to come out with good intensity on defense. We got some big turnovers in overtime and Giselle got those clutch free throws.”

The match-up between the two Skyline Central Conference rivals was close throughout, with neither team able to build more than a six-point lead.

“We thought we had them a couple times, then we kind of relaxed on defense,” said Richer. “We have a team that’s real emotional with a lot of highs and lows. The girls worked hard. I thought we played a real good second half. Only, we missed free throws at the wrong time. We’re learning. I’m still learning about them and the conference. Cara’s 3 was a big shot. That set us up for overtime.”

Boulton and Wagner continued to dominate the rest of the season, with each finishing around 15 points per game.

“Sandra had a real good game,” said Linder. “She couldn’t miss in the first half. This was a pretty dominating performance for her. When Tessa puts her hands up on defense and deflects shots, it steps up our game. We have some depth this year. Teams can’t wear us down as in the past. It feels real good to win one here. They really took it to us here last year.”

The Wolves went on to win their first district title since 2006 when they took down North Dickinson 44-33 on March 6. They then fell to L’Anse 53-47 in a regional opener in Kingsford just before district tournaments were suspended by the MHSAA due to the coronavirus.

BR-H had three scorers reach double figures in this contest, led by Grace Peterson with 12. Arnt added 11, while Allison Richer chipped in 10.

The Broncos, who dropped to 4-3 at the time, finished their season 12-9 after losing 51-36 at Westwood in a district semifinal March 4.