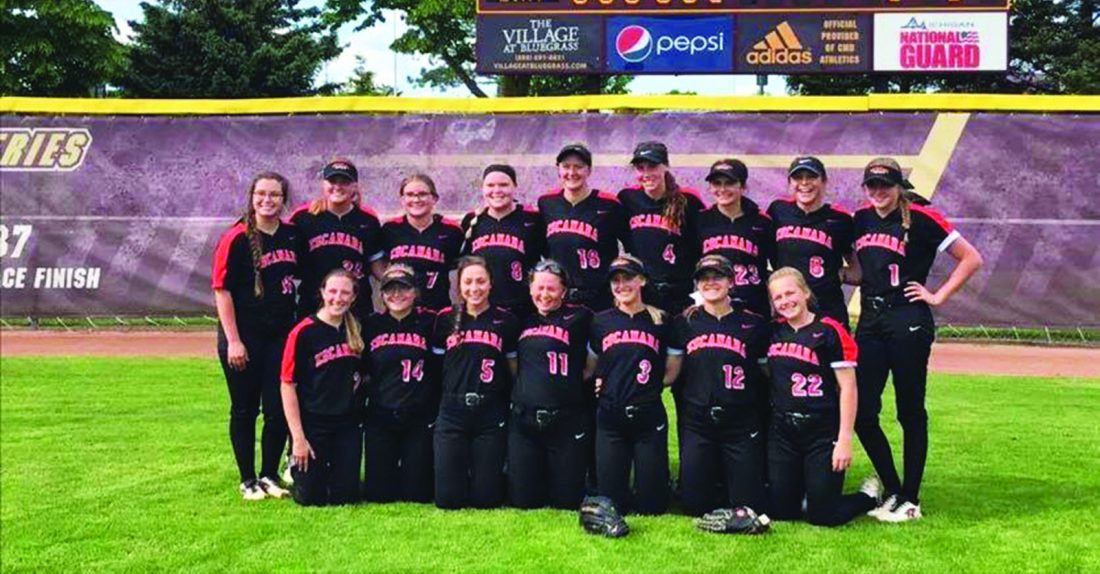 Courtesy photo The Escanaba softball team poses for a picture after taking down Freeland 2-0 in a Division 2 state quarterfinal Tuesday at Central Michigan University in Mount Pleasant. With the win, Esky advances to the state semifinals Thursday at Michigan State University.

For the second game in a row, Gabi Salo came up with the big hit to support her dominant pitching and the Escanaba softball team hung on for a 2-0 win over Freeland in a Division 2 state quarterfinal here Tuesday.

With no score entering the bottom of the sixth inning, Nicole Kamin led off with a single, then stole second base. After Dakota Cloutier grounded out, Salo doubled on a deep fly ball to center field to score Kamin. McKenna Bullen came in to pinch run for Salo and scored on an error on a hard ground ball to third off the bat of Jalin Olson to make it 2-0.

“Nicole Kamin has been such a great hitter for us, especially late in games. She just seems to come through and get on base,” Esky coach Gary Salo said.

“And hats off to (Gabi) to come through with the big hit; that’s definitely what we needed at that time.”

Coach Salo said the Eskymos talked about getting on the board in the huddle before coming up to bat in the sixth.

“We felt very good when we huddled up in the bottom of the sixth,” he said. “I told them, ‘we have six outs, they only have three.'”

Salo pitched another complete game gem for the win, surrendering just one hit and two walks. But this time, she only struck out five, forcing the defense behind her to be more active and make plays.

“I think they ended up with one hit off of her. She kept the ball down and produced a lot of groundouts. The other day against (Muskegon) Oakridge (in the regional final) she struck out 17, so for our defense to get 10 more outs on their own was huge,” coach Salo said.

“Maddy Block had a lot of putouts at second base. We replaced the entire infield this season, so I have to give a lot of credit to them. Heather Bergstrom has been solid as a senior at third base, Maddy Block is only a junior so we’ll have her coming back next year at second base, Carsyn Segorski is only a freshman at shortstop, and Nicole Kamin is just a great athlete at first base. It’s great that the girls came through with a great defensive performance.”

The defending state champion Eskymos (32-3) advance to the state semifinals at Michigan State University Thursday, where they face North Branch at 12:30.

“Every single team we’ve faced this year has given us their best game. Every single time we’ve stepped on the field we’ve seen the best these teams can do,” coach Salo said. “We set the goal at the beginning of the year to get back to Michigan State, and now we have the opportunity to do that. Now, we’re just here to have fun.”