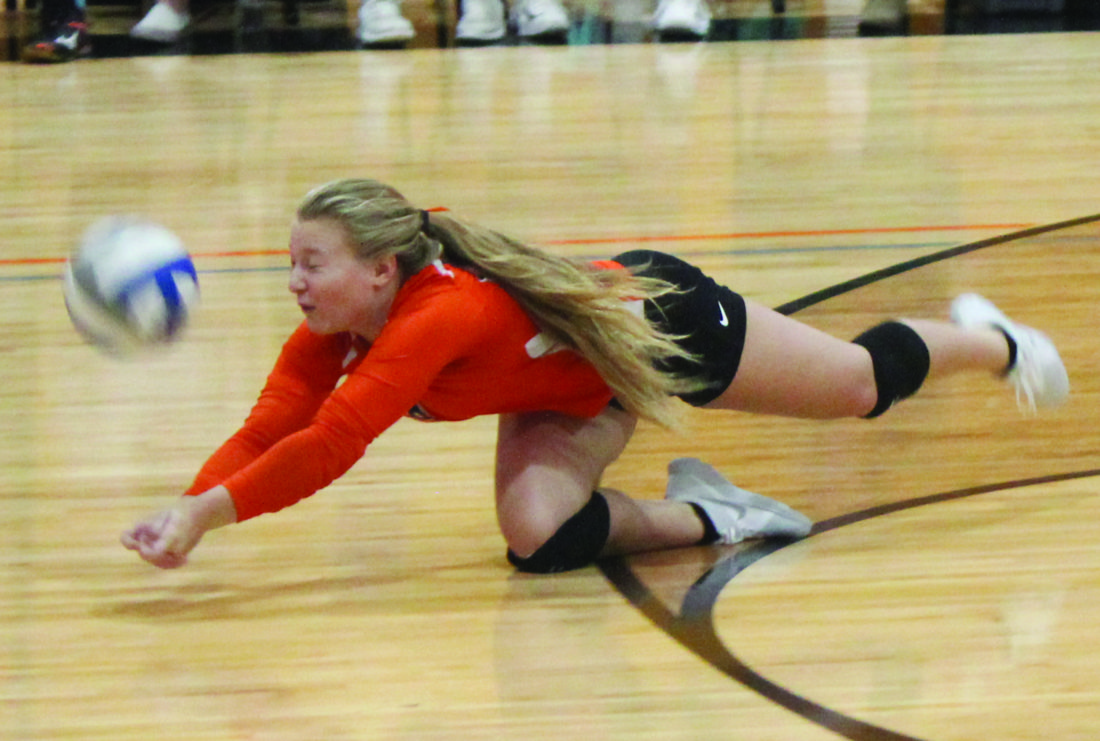 Dennis Grall | Daily Press Jalin Olson hits the hardwood as she tries to save a shot Tuesday at Escanaba in a match against Menominee. Esky won 3-0.

ESCANABA — The Escanaba Eskymos nearly got more than they bargained for Tuesday night as they struggled past the Menominee Maroons 3-0 (25-16, 25-23, 25-22) in a Great Northern Conference volleyball match.

Esky trailed much of the third set and was down 17-15 after a passing error.

Menominee then committed four miscues of its own, including back-to-back passing errors which sent Esky ahead 19-17.

The score was tied at 21 before the Eskymos went ahead to stay on a service error.

“We made a lot of errors,” said Esky coach Adam Lambert. “They got 16 points off our errors in the third set. I was getting worried that maybe we were going to go four or five (sets).”

“Menominee is a good team, but I think the girls let their guard down a little,” said Lambert. “During the time-out, we reminded them about who we are as a team.”

The Eskymos responded with a 4-1 run, tying the score at 15 on a hitting miscue before the Maroons went ahead for the last time.

Esky led 16-9 in the second set, but the Maroons didn’t just go away.

Menominee then outscored the Eskymos 14-7, tying the score at 23 on a hitting miscue.

The Eskymos got a much-needed sideout before clinching that set on a service ace by junior Tess Henderson.

Menominee took 3-0 lead on a kill by junior Ashley Powell in the third before the Eskymos answered with a five-point run.

“The girls did a good job carrying the momentum from the second into the third set,” said Menominee coach Sarah Betzinger. “When the girls play together, they can play well. We’ve improved a lot from the beginning of the season. We’re coming together as a team. The girls are getting more comfortable with each other.

“We played extremely well this weekend (in Saturday’s Marquette Invitational). Reaching the semifinals gave the girls some confidence and we came away from there with a good feeling.”

Esky led just 14-11 in the opener, then got a sideout followed by a five-point service run by junior libero Jalin Olson for a 20-11 cushion.

“That was a nice run by Jalin,” said Lambert. “I thought Maddy Block really played well on defense. She dug up a lot of balls and Lexi Challier was strong at the net.”

Senior Hannah Cole led the Maroons at the net with seven blocks. Junior Kylie Wickstrom was their defensive leader with 35 digs and senior Emma Hofer had 30.

“I was much happier with our second and third games,” said Betzinger. “We started communicating and moving around better. We were anticipating rather than reacting. Escanaba did a great job covering the floor and we had trouble with their middle blocker. We kept hitting into her.”

Esky won the jayvee match in three sets, but dropped the freshman contest in two.