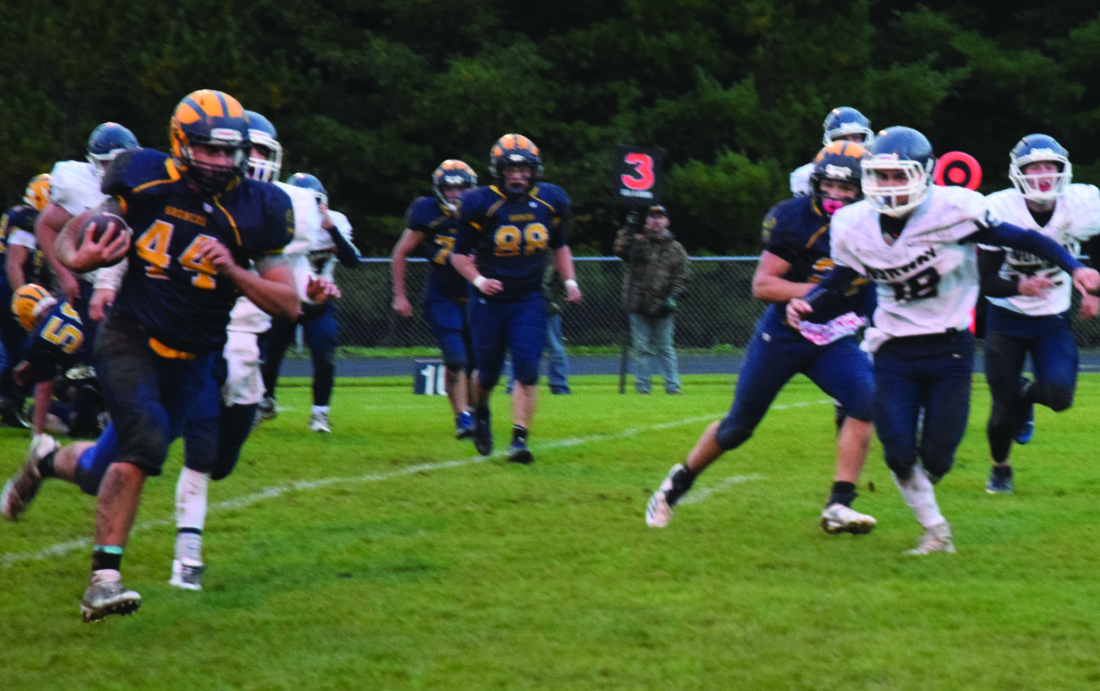 Mark Johnson | Daily Press Bark River-Harris running back Dylon Lippens (44) heads into the end zone on a 13-yard touchdown run in the second quarter against Norway Friday night. The Knights held off a fourth quarter BR-H rally to beat the Broncos 27-22.

The Knights utilized a balanced offense with quarterback Trey Doda and running back Mitchell LeGrave combining for 200 yards of first half offense and a 13-6 lead at halftime.

BR-H had a time consuming drive of its own to tie the game at 6-6 early in the second quarter. Sophomore running back Dylon Lippens scored the tying TD on a 13-yard run capping an 80 yard drive.

Doda passed 40 yards to Nathan Paulitich for the go-ahead score and the Knights’ drive included 35 yards rushing by LeGrave.

Doda’s three yard TD run upped the Knights’ lead to 20-6 late in the third quarter. The scoring drive was another long one, 75 yards, 11 plays and five minutes.

LeGrave was the bull working ground game leader for the Knights with 20 carries and 145 yards, and played one of his best career games according to Norway coach Bob Madigan.

“This game he earned his yards,” said Madigan. “He pounded it in there and without him, we don’t win. Both him and Doda were good on defense for us too.”

Norway (3-3) has lost to the top teams in the U.P. (Ishpeming, Calumet and Iron Mountain) and Madigan was impressed with his team.

“We are a hard-working, blue collar team and I am proud of our team,” he said. “Tonight was two evenly matched teams that played their hearts out.”

Doda was 7-14 passing for 152 yards and he also rushed the ball on the RPO option for another 40 yards.

BR-H (1-5), scored 16 fourth quarter points led by sophomore quarterback Nick Javurek, who was back in the lineup after missing two games with an injury.

Javurek threw touchdown passes of 10 yards to Lippens and 90 yards to Willy Schmitt in the fourth quarter.

“It was good to get Nick back and he gives us a different dimension throwing the football,” said BR-H coach Al Stenberg.

Following poor team performances in losses to Munising and Iron Mountain, Stenberg was pleased with his squad on homecoming.

“All the accolades go to these kids to come out tonight and turn it around after a couple bad games,” said Stenberg.

“Norway is always a disciplined team and we had to play well. I couldn’t be prouder of my team tonight for how they battled.”