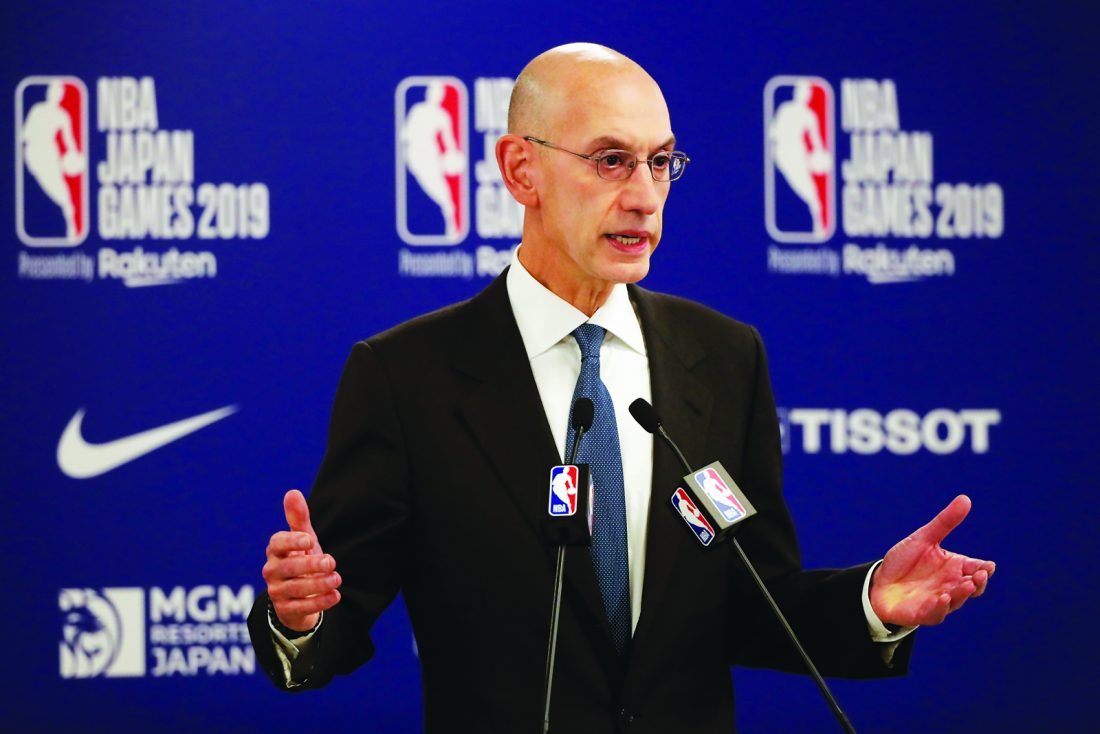 AP photo In this Oct. 8, 2019, file photo, NBA Commissioner Adam Silver speaks at a news conference before an NBA preseason basketball game between the Houston Rockets and the Toronto Raptors in Saitama, near Tokyo. It’s been over three months since the commissioners of major sports cancelled or postponed events because of the coronavirus. Enough time for us to grade them on how they’ve handled the virus so far.

Acknowledging that no option would have been risk-free during a pandemic, NBA Commissioner Adam Silver said Friday that the concern shared by the league and its players surrounding next month’s restart of the season is rising as coronavirus cases in Florida keep climbing.

That said, the league and the National Basketball Players Association is moving forward — finalizing the deal that will bring the NBA game back and see teams start arriving at the Disney campus near Orlando, Florida in less than two weeks.

Many of the details of the agreement were already known, such as how “stringent health and safety protocols” would be in place for the 22 teams that will be participating, that no fans will be present and that games will be held in three different arenas at the ESPN Wide World of Sports complex.

But when those protocols were completed, the Orange County, Florida area — which includes Orlando — had seen a 5% rate of positive coronavirus tests over the preceding 10 days. In the 10 days that have followed, the rate of positive tests there has soared to just over 15%.

“We ultimately believe it will be safer on our campus than outside it,” Silver said Friday afternoon. “But the signal we are sending is this is definitely not business as usual. This is far from an ideal way to finish our season, and it will require tremendous sacrifices from all those involved.”

Silver said the league is working with Disney to test at least some of their on-site employees that could be in the same room as NBA players, which he believes will make the setting even safer.

Once players get to Disney, they will be tested daily. Testing is in an every-other-day mandatory phase now for the 22 teams set to participate in the restarted season. and the results from Tuesday’s first 302 tests saw 16 players positive for the virus.

“I think one would have been concerning,” NBPA executive director Michele Roberts said. “But, God forgive me, I was frankly to some extent relieved that the number was not higher. … If nothing else, it told me that the great majority of our players have been doing exactly what they should have been doing to keep themselves safe.”

Silver said it may be possible that, if there was a significant spread of the virus within the Disney campus, “that might lead us to stopping.” He said the league has not precisely concluded what number it would take for the league to shut down the season once it resumes, and continues working with the players and health officials to determine what that number should be.

The league and the union announced earlier this week that addressing racial issues and inequality in the country will be a priority during the restarted season. Silver, Roberts and others — including union president Chris Paul of the Oklahoma City Thunder — stressed Friday that those matters will be an extremely critical component of what happens at Disney, both on and off the floor.

While dealing with the plans for pulling off a restarted season and then playing a full postseason during a pandemic, the league and the union have had numerous meetings as well to discuss options for how to address issues such as the recent killings of George Floyd, Breonna Taylor and Ahmaud Arbery, the ongoing problem of police brutality and furthering the Black Lives Matter movement.

Silver said the NBA looks at itself as a key partners to the messages that players want to be seen and heard at Disney, during a time of what he called enormous social unrest. “We may be the most uniquely qualified organization in the world to affect change,” Silver said, noting that the league’s players are some of the best-known Black personalities on the planet.

The NBA suspended its season March 11 because of the virus. It took the league more than three months just to get to this point, and it would seem most unlikely that once teams get into what the league hopes is a secure environment at Disney that issues such as more positive tests wouldn’t be a factor.

There are countless business reasons to play, massive revenue streams at stake for players, the league and the NBA’s media partners — Disney included. And Silver acknowledged that even though the league “hasn’t worked through every scenario” regarding the possibility of on-site positives at Disney, he believes coming back is the best move.

“Ultimately, whether it’s fighting racism or a pandemic, we’re coming back because sports matter in our society,” Silver said. “They bring people together when we need it the most and they can show how we can balance public health and economic necessity.”