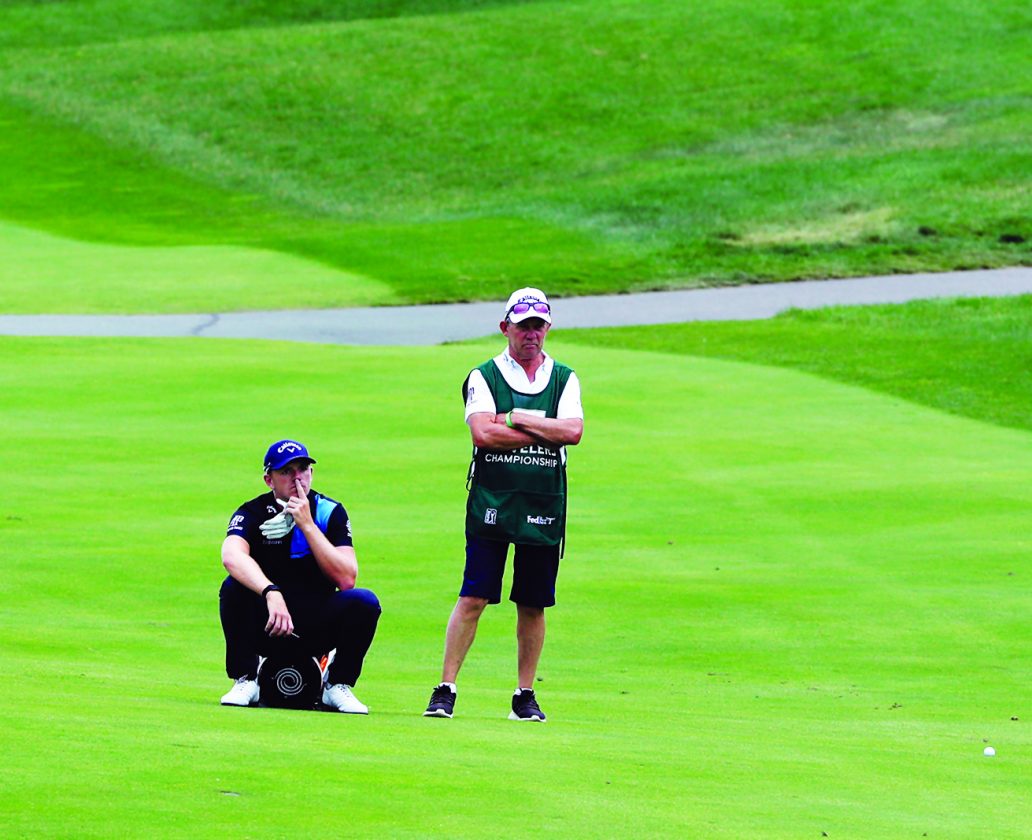 AP photo Matt Wallace, left, of England, waits to play his ball on the 13th fairway next to his caddie David McNeilly during the second round of the Travelers Championship golf tournament at TPC River Highlands Friday in Cromwell, Conn.

CROMWELL, Conn. (AP) — Will Gordon shot an 8-under 62 on Friday to take the lead halfway through the second round of the Travelers Championship, where two more players withdrew because of the coronavirus.

Gordon, the 23-year-old former Vanderbilt player making his eighth PGA Tour start, was at 12-under 128. He got into the field on a sponsor exemption.

Mackenzie Hughes, the first-round leader after a 60, played in the afternoon.

The field continued to shrink after Denny McCarthy tested positive for the coronavirus. McCarthy withdrew along with Bud Cauley, who tested negative for the virus, but played alongside McCarthy on Thursday.

The departure of McCarthy and Cauley made seven withdrawals from the tournament because of COVID-19.

Gordon shot a 30 on his first nine holes, making six birdies and a single bogey on the back nine at TPC River Highlands. He had nine birdies during his round and just missed a few others, including on the fourth hole where his 35-foot birdie putt came to rest on the edge of the cup.

“After seeing the scores yesterday morning I knew that it was going to be gettable this morning,” he said. “I Just tried to come into today with a really positive mindset and aggressive mindset and I was able to do that and execute early, which whenever I get that momentum early, I usually don’t let it go, so I was pretty proud of myself and how I hung in there early.”

Gordon tied for the best round of the morning with Brendan Steele, who was 9 under.

McCarthy, who shot an opening-round 67, said he began began feeling sick Thursday night and tested positive for the virus on Friday morning.

“I woke up in the middle of the night with additional aches and soreness and sensed something was off,” he said. “I felt like the only thing to do was get tested at that point before I went to the course.”

Cauley, who opened with a 69, had two negative tests Friday. He withdrew “out of an abundance of caution for my peers and everyone involved with the tournament,” he said.

Matt Wallace, the third member of their group, teed off by himself early Friday afternoon.

McCarthy was the third PGA Tour player to test positive for the virus since its restart and the second this week, joining Cameron Champ, who withdrew on Tuesday.

Nick Watney withdrew just before the second round of last week’s RBC Heritage Championship. Webb Simpson, Graeme McDowell, Brooks Koepka and his brother Chase also withdrew from the Travelers after coming into contact with people who had the virus.

Collin Morikawa, also is heading home, but not because of COVID-19. The 23-year-old Californian was expected to miss the cut for the first time in his PGA Tour career after rounds of 72-71.

Morikawa had made 22 straight cuts since turning pro in June, the longest such streak since Tiger Woods began his PGA Tour career with 25 consecutive cuts.

“It was bound to happen at some point,” Morikawa said. “Who knows when that was going to be. But now I guess we’re going to stop talking about it and I can go and just go on to next week. I’m going to learn a lot from this week.”