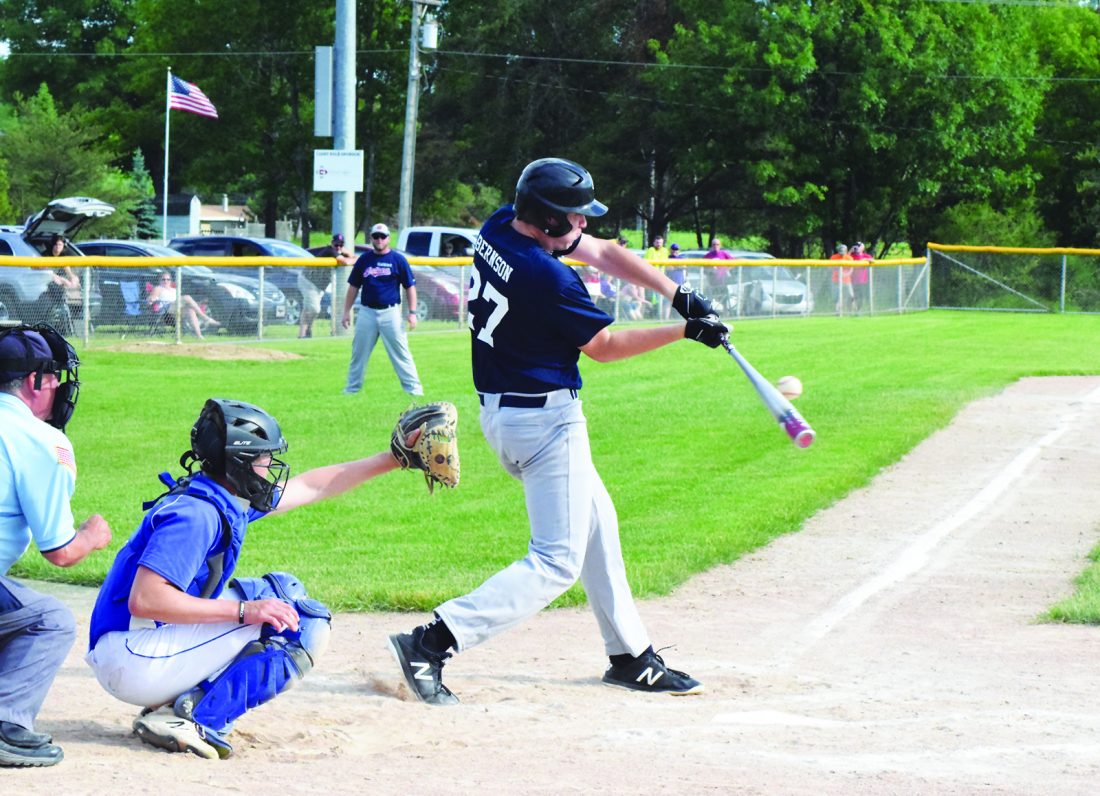 GLADSTONE — The Gladstone Indians picked up their first win of the season while handing the Marquette Blues their first loss with a 6-5 home victory Thursday night in the Under-19 Upper Peninsula Baseball League.

“It feels good to get a win,” Indians manager Justin Jurek said. “Getting that first one out of the way takes a little bit of stress off the guys. It’s definitely a good morale booster.”

It was completely on Gladstone’s shoulders as the game entered the bottom of the seventh inning tied at 5.

“Last time we played them, we gave up six runs, and five of them, we walked in,” Blues manager Derek Swajanen said. “These five runs, they were all with two outs and on borderline pitches that could’ve struck them out. This game could’ve easily been a 7-0 game. They say baseball is a game of inches, and that’s what this game boiled down to.”

Riley Baldovski doubled on a fly to left field, and Ryan Polley reached first base on indecision from the Blues, who couldn’t decide who to try to throw out.

Blake Krouth then drew a walk to load the bases, and Zach Hanson drew another for the walk-off run.

A walk and two hits loaded the bases for Gladstone, and Hanson drew a walk to push Drake Forrest across home plate and take the lead. Caden Alworden then doubled on a deep fly to center field allowing Hanson, Polley and Baldovski to make it home and increase the lead to 5-1.

Marquette tied it up again in the top of the sixth after two hits put two on base, and Kyle Frusti smashed a home run beyond the left field fence to cut the deficit to 5-4.

A single from the Blues’ Brendan Kaski prompted a Gladstone pitching change, moving from Parker Frappier to Trevor Hanson.

A double and two walks loaded the bases for the Blues and spelt the end of Trevor Hanson’s time on the mound as Zach Hanson took his place.

Marquette’s Jon Jason hit a ground single, but a fielder’s choice allowed Gladstone catcher Dan Martin to tag out Jakob Peterson on his way to home plate. A strikeout finished the top of the sixth with the game tied at 5, and the stalemate wouldn’t be broken until the seventh.

Frappier earned the win for the Indians over 5 1/3 innings, allowing 13 hits, five runs and one walk while striking out three.

Blake Henriksen took the loss for the Blues over six innings, allowing five hits, five runs and two walks while striking out seven.

Alworden led the Indians with three RBIs and two hits, and Zach Hanson picked up two RBIs. Baldovksi and Polley collected two hits apiece, and Dayton Bernson pulled in one hit and one RBI.

“We always have a good battle with (Marquette),” Jurek said. “It’s never a blowout one way or another. It’s always fun playing them.

“(To build on this momentum) we just have to keep learning from our games. We’ve been preaching it to the guys these last two weeks. Offensively, defensively, pitching, whatever it is, we’ve got to learn something and apply it to our next game.”

“We didn’t get the key hits when we could’ve, and it seems like that’s been following us for a year and a half,” Swajanen said. “We got more barrels today. We hit the ball harder. We’re getting more and more every game and you could build upon that. Even if we’re getting out, we’re hitting the ball hard. I can still work with that.

“You’ve just got to work out the kinks. Sometimes you learn more from a loss than you do from a victory.”