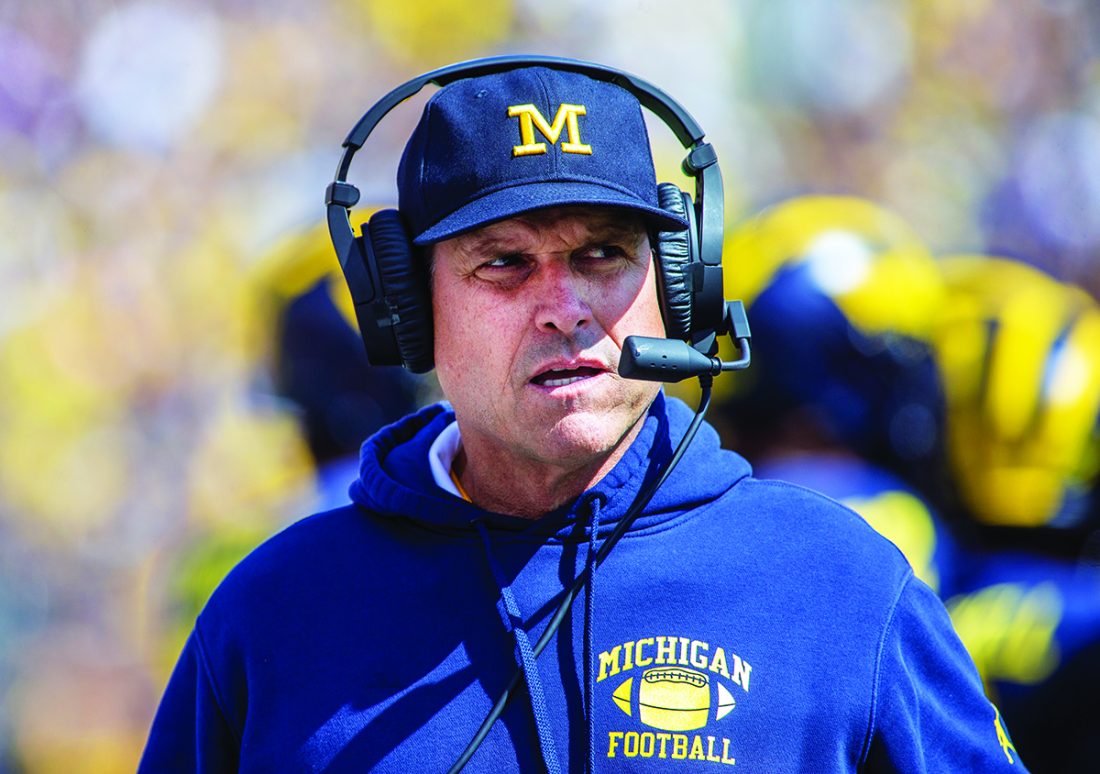 AP file photo In this Sept. 7, 2019, file photo, Michigan head coach Jim Harbaugh is shown on the sidelines in the first half of a game against Army in Ann Arbor, Mich.

KALAMAZOO, Mich. (AP) — Police officers in Kalamazoo were outnumbered 50-to-1 before using tear gas and chemical spray in the wee hours Tuesday to get rid of protesters and stop damage at downtown businesses, authorities said.

“It was not our community’s finest hour,” said Karianne Thomas, chief of public safety.

In Kalamazoo, police said peaceful protests Monday over the death of George Floyd in Minneapolis turned violent at night as officers and vehicles were pelted with rocks and bottles.

More than 25 downtown businesses and two patrol cars were damaged, an officer was injured and six people were arrested, Thomas said.

“We hear you. Black lives matter,” City Manager Jim Ritsema said, speaking outdoors to reporters and the public. “I haven’t experienced your pain but I feel it.”

Assistant Chief Vernon Coakley said Kalamazoo was swarmed with hundreds of vehicles, many of them speeding or ignoring one-way street signs. He said there was “credible intel” that people from outside the region had targeted Kalamazoo.

“Those groups began to outnumber law enforcement 50 to 1,” he said.

“We’re at a fork in the road, and it’s a big fork. Let’s continue to work together,” Coakley, who is black, said in a plea to the community “Mr. Floyd needs to be the last one. I’m angry. … That’s not what a million and one officers do every day.”

In Detroit, Mayor Mike Duggan was heartened by an orderly protest Monday, the fourth consecutive day of demonstrations. An 8 p.m. curfew remained in place Tuesday.

However, several protesters were arrested late Tuesday after defying the curfew.

A group of protesters, chanting “we don’t back down to bullies and shields,” stopped in the middle of street, prompting police to place them in plastic handcuffs and put them on a bus.

Chief James Craig later said he received a tip that a group of protesters planned to defy the curfew.

“I was hoping it would’ve ended with compliance like last night,” Craig said, referring to Monday night’s protests where participants left peacefully.

“Nobody threw a stone. … No one shot any tear gas canisters. We can do this without tearing down our city,” Duggan said of Monday’s protest.

He praised a teenager, Stefan Perez, who rode a bus to join the protest and then urged the throng to obey the curfew and go home.

“Sixteen years old — and he just wants a world where he doesn’t have to be afraid when he’s stopped by a police officer,” the mayor said.

Perez and Duggan talked by phone.

“The people followed me into battle, and I’m glad that I was able to get them home safely,” the teen said.

Choosing the right rug for the room