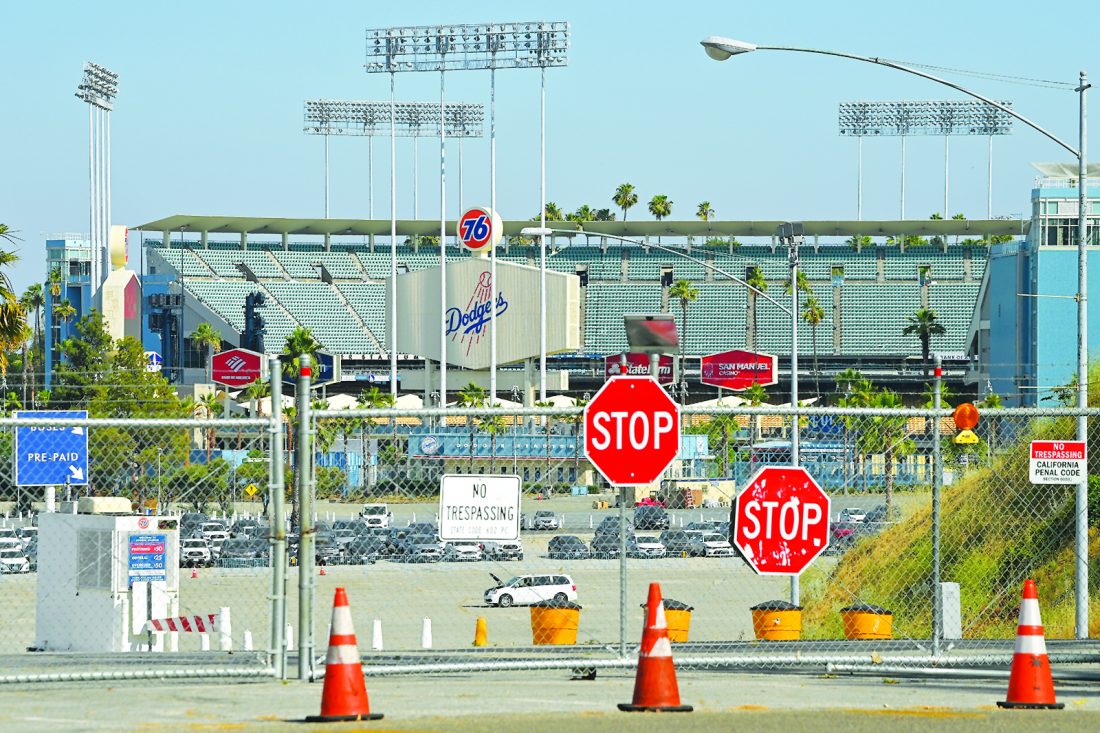 AP photo Dodger Stadium stands behind locked gates June 24 in Los Angeles. By the time Major League Baseball returns in late July, it will have been more than four months since teams last played.

PHOENIX (AP) — Baseball’s bubble-free environment is an anomaly as the sports world tries to come back amid the coronavirus pandemic.

Instead of bringing a group of teams to Disney World (like the NBA and MLS) or concentrating on a few hub cities (like the current NHL plan), Major League Baseball has 30 teams spread all over the United States and potentially Canada, with players, coaches and team personnel trying to stay healthy while cases are still spreading.

Needless to say, it won’t be easy.

Arizona Diamondbacks GM Mike Hazen said he’ll be constantly reminding everyone in his organization about the delicacy of the current situation. It’s especially important in Phoenix, where COVID-19 cases have increased substantially over the past few weeks.

“Things are going to have to change temporarily in our lives to be able to do this.”

That means altering the way players behave on and off the field.

The on-field portion is largely addressed in a hefty manual that covers everything from hotels to showers to spitting. It will be awkward and sometimes not particularly practical, but teams are vowing to do their best.

“You’re putting a lot of people in a small, confined space, which is the one thing the medical experts are telling us not to do,” Oakland A’s GM David Forst said. “So we’ll have to limit clubhouse time as much as possible, guys will have to wear masks as much as possible.”

Then there’s the considerable amount of time players will spend away from the field.

Texas coach Chris Woodward said health issues will be critical throughout the season and the usual carefree life of a ballplayer will be a bit more tame. While health is obviously the most important issue, there’s also the on-field realization that losing players for several days to COVID-19 might also be the difference between wins and losses.

“The younger guys that are single that, you know, tend to be a little bit more social,” Woodward said. “Those are going to be the challenging ones because they’re not going to want to sit in your hotel room on road trips. But I think it’s their responsibility that they have to the ballclub and the organization and their teammates, honestly.”

The first step toward a successful season is getting all the players to their home cities.

Most shouldn’t have much of a problem but there are plenty of logistics involved with domestic and international travel. Some players might face significant hurdles: For instance, Arizona pitcher Bo Takahashi is coming back to the U.S. from Brazil, which is another coronavirus hotspot.

Chicago White Sox GM Rick Hahn said his team’s travel department has a busy week ahead, but that they’ve been planning on this scenario for quite a while. The challenges are real but so is the payoff. For MLB, a strange 60-game season is a better alternative than no season at all.