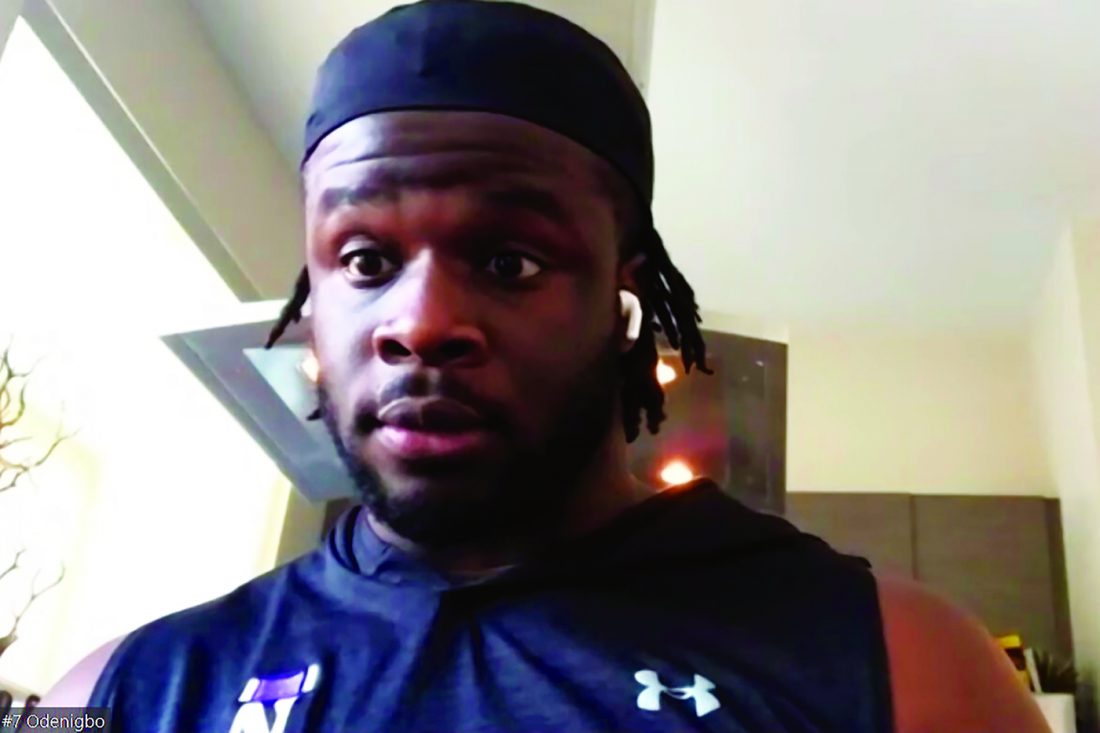 AP photo In this photo taken from video, Minnesota Vikings defensive end Ifeadi Odenigbo talks on a conference call from his home in Chicago, Thursday.

MINNEAPOLIS (AP) — The Minnesota Vikings, like the rest of the NFL during this virus-restricted offseason, have been forced to rely on virtual instruction over video conference calls between staff and players.

Ifeadi Odenigbo’s opportunity to become a full-time starter at defensive end has arrived. And, he has tried to take full advantage of the screen time with defensive line coach Andre Patterson.

The old adage about working hard when nobody’s watching? Consider it part of Odenigbo’s daily routine in this strangest of spring practice sessions.

“It’s a good thing that the cameras are off. Coach Dre will say things and tell me I need to do ‘this.’ I kind of get into my stance because no one’s able to see me, and I start visualizing. I start doing power steps. I start working long arms,” said Odenigbo, whose seven sacks were third on the team in 2019 behind Danielle Hunter and Everson Griffen.

This is all part of the preparation for what will undoubtedly be the biggest role yet of Odenigbo’s fledgling career that made its first major acceleration over the second half of last season. Griffen, the longest-tenured player on the team, became a free agent and did not re-sign with the Vikings. Hunter, the two-time Pro Bowl pick who last year became the youngest player in NFL history to reach 50 career sacks, could use a consistent rush on the opposite side and up the middle to maintain his top-level production of the last few seasons.

“I don’t need much motivation because I see that guy go out and bust his butt every single day, never complains,” Odenigbo said Thursday from his home in Chicago on a video conference call with reporters. “Even when I’m working out, I’m thinking, ëWhat’s Danielle doing now? Danielle is probably doing some crazy stuff and being low-key, incognito.’ It’s good to have guys like him, but I don’t want to be a drop-off.”

Over the last three regular season games in 2019, Odenigbo had three sacks, seven quarterback hits, one forced fumble and two fumble recoveries — including one he returned for a touchdown against the Los Angeles Chargers.

“That’s one thing that I’m excited about, seeing him this year, because I feel like he’s ready to go out there and show what he’s got, and I believe that it’s coming this year,” Hunter said last month. “He’s a good worker. He has great work ethic. That’s the type of guy that we like around here.”

Griffen is one of five players who departed from the most common defensive lineup last season, a dangerous level of turnover for a team still carrying enough accomplished veterans to remain in win-now mode. The teaching acumen of assistants like Patterson will be put to the test, for sure, but coach Mike Zimmer said recently he sees the higher than usual number of unproven players in the mix as a “refreshing” change for him and his staff.

“When I say refreshing, I don’t mean I’m glad these guys are gone,” Zimmer said. “What I mean is it energizes us as coaches to try and get these guys up to speed as fast as we can. It reminds me, honestly, of college.”

At the NFL scouting combine earlier this year, when Griffen was still expected to return, Zimmer said he sees Odenigbo as capable of playing full time at the demanding defensive end position despite being slightly undersized at 6-foot-3 and 258 pounds.

Drafted in the seventh round out of Northwestern in 2017, Odenigbo spent his rookie season on the practice squad. He was a training camp cut in 2018 who landed on three practice squads over the first nine weeks of the season: Cleveland, Arizona and back to Minnesota again. Philadelphia offered him a spot on the active roster near the end of that year, but the Vikings were high enough on his potential to persuade him to stay for a raise.

The move paid off for both sides.

“I was given an opportunity,” Odenigbo said, “and I made the most of it.”