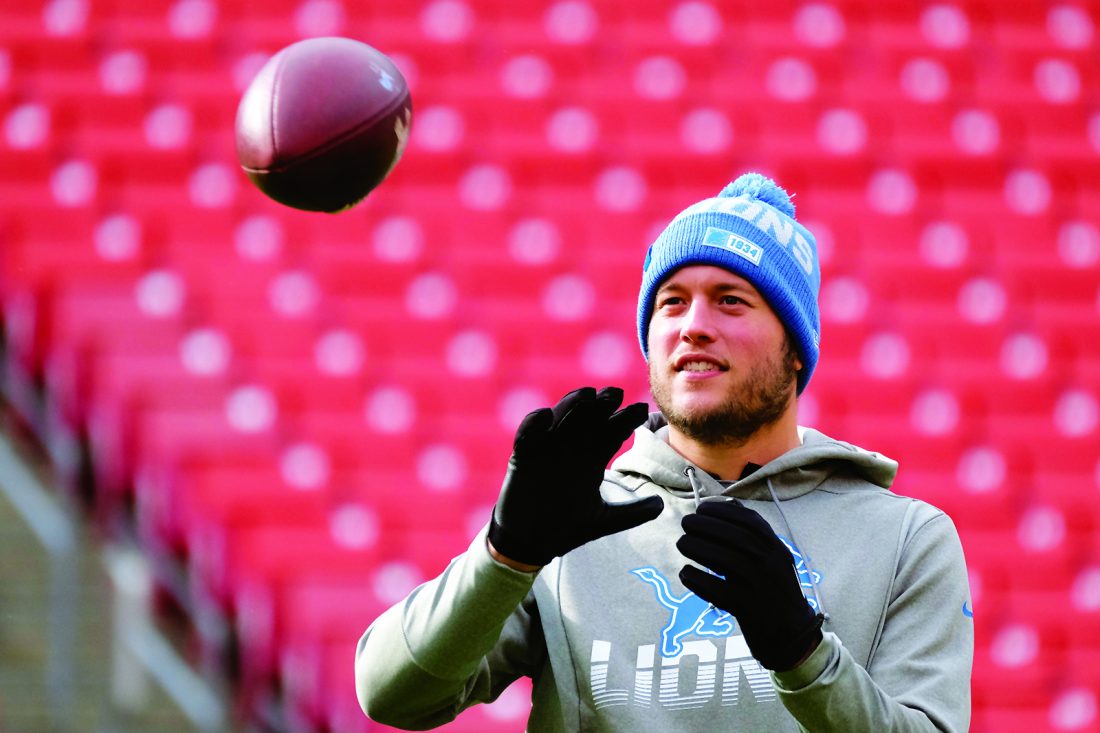 Some NFL quarterbacks are still finding ways to hold throwing sessions with receivers during the coronavirus pandemic, though things look much different.

Players are keeping it simple and sticking to football instead of the annual weeklong bonding trips that have included sleepovers, cookouts, fishing, golfing and other activities.

“We’re limiting the amount of people that are there,” Stafford said. “Obviously, it’s only the guy throwing and the guys catching.”

Stafford has changed his routine between throws to avoid spreading germs.

“I’m honestly making a conscious effort to try not to lick my fingers before I get the ball or throw it,” he said. “All those kinds of things are things that I would have never thought I would have had to think about.”

After workouts, Stafford and his group are not giving high-fives, bumping fists or hugging.

“Everybody would just kind of click cleats at the end and say, `Appreciate you running, appreciate you throwing and move on,ë” Stafford said. “So doing everything we can to try to stay safe. Obviously, I have three little ones and a pregnant wife at home, so it’s at the forefront of my mind to make sure that I’m staying safe.”

Quarterbacks often organize passing workouts before training camp. They use that time together to build chemistry with new receivers and it’s an overall bonding experiencing.

Philadelphia’s Carson Wentz held workouts with teammates in his hometown in North Dakota in 2017. Last year, he invited them to his house in Texas.

Cowboys quarterback Dak Prescott got together last July with wideouts Amari Cooper and Randall Cobb and tight end Jason Witten along with other players.

“The training is one thing,” Prescott said after the trip. “You’re going out there, spending a few hours training, hammering it, talking about how I want you here on this route or what I’m thinking on this route, and vice versa. But when you leave there, play a couple rounds of golf, you have dinner, those type of things, those conversations. The tight ends getting to know the receivers better. Me getting to know them better.

“All that pays off in the end when it comes to crunch time in a game. You can look at a guy and you know you put in time, that camaraderie, and you create a relationship that it’s easy at that point.”

Social distancing and sheltering at home rules due to the pandemic have canceled those types of gatherings and forced players to alter their normal routines. Any throwing sessions now are important because teams are holding virtual meetings instead of traditional offseason programs.

Earlier this week, Tom Brady and several of his new teammates on the Buccaneers worked out on a high school field in Tampa. Center Ryan Jensen was there along with receivers Mike Evans and Scotty Miller, tight ends Cameron Brate and O.J. Howard, running back Dare Ogunbowale and quarterbacks Blaine Gabbert and Ryan Griffin.

Cleveland’s Baker Mayfield invited several of his Browns teammates, including tight end David Njoku and wide receiver Rashard Higgins, to get together with him last week.

“There’s challenges for everyone, right? But what you do is, is you try and find ways to adjust and adapt, and like we said before our theme this offseason has been ëFind a way,'” Bills coach Sean McDermott said. “And I think that really fits the time and the situation and circumstances we’re in.”

Tennessee’s Ryan Tannehill has been working out with tight end Jonnu Smith for two months at a local park in Florida.

Titans wide receiver A.J. Brown is catching passes from practice squad quarterback Logan Woodside in Tennessee. Brown planned to join Tannehill in Florida but stayed home because of the lockdown.

“I’m definitely putting in work, so as (soon) we can get back together we’ll get back where we left off,” Brown said. “I don’t think this offseason and due to the coronavirus is going to mess anything up. You have to put in the work. The work shows.”