No. 2: Eskymos hold off Braves for district title 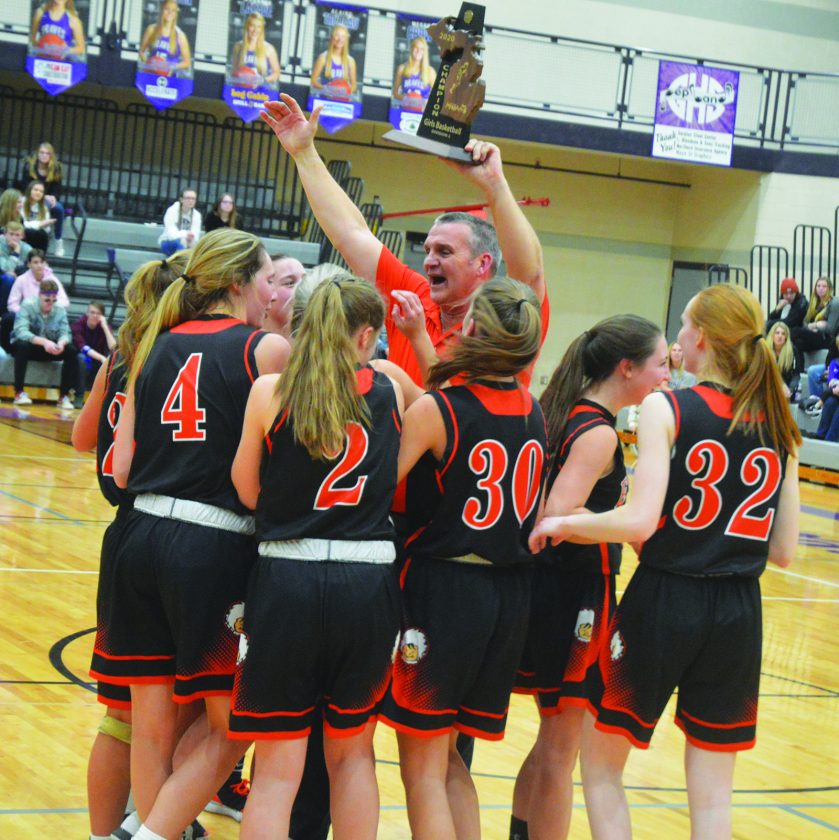 GLADSTONE — When it comes to basketball in Delta County, it doesn’t get any better than Escanaba and Gladstone battling for a district championship.

The Escanaba and Gladstone girls met for the third time of the season March 6 in Gladstone with a district title on the line, and both teams had plenty of reason to believe this was their year.

The Eskymos had already beat Gladstone twice in a pair of tight games, they had arguably the best player on the floor in junior forward Nicole Kamin, and they had a young roster that had proven itself under pressure over and over again throughout the season.

On the flip side, the Braves were booming with confidence after pulling the upset of the year in a shocking 46-45 win at Menominee earlier in the week. They then followed that up with an impressive 61-46 victory over Kingsford, as they appeared to be playing their best ball of the year with junior center Megan Crow as healthy as she’d been all season.

In the end, it was a dominant third quarter and a balanced effort across the board that allowed the Eskymos to hold on for a 52-48 victory and their first district title since 2000.

“All day I thought one of us going to win, and one of us is going to lose. I just said let it be in the cards, because it’s our turn,” Esky coach Mike Beveridge said while full of excitement afterwards.

“We’ve been in the championship and we’ve lost a couple times (in the last few years). That was such a sweet win, but to beat Gladstone and to do it three times this year, it tastes good. It’s a good taste in my mouth.”

It was an intense rivalry game throughout, with the two teams trading runs throughout the first half.

Escanaba led 15-13 after the first quarter, but Gladstone took a 27-25 lead into halftime after senior point guard Maddie Ahlgren buried an elbow jumper with four seconds left in the first half.

The Eskymos then dominated the third quarter, starting the period on a 10-0 run to gain a 35-27 advantage on a driving layup by Bailey Barron. They maintained a sizeable advantage that grew to 47-35 after Kamin blocked a shot by Ahlgren that led to a run out and a nice pass from Taylor Ray to Maddy Monkevich for a layup with 5:11 left in the game.

But just like they did in the shocking upset over previously undefeated Menominee, the Braves didn’t go away, rallying all the way back to pull within 49-47 on a triple from the top of the key by Ahlgren with 1:14 remaining.

Ray and Kamin each went 1 for 2 at the charity stripe over the next 40 seconds to give Esky a four-point advantage before Marnnea LaFave brought the Braves within 51-48 with a free throw with 19 seconds left.

After the Eskymos killed some clock, Bink made the front end of a 1-and-1 to put Esky back up by four. Ahlgren then missed a triple on the ensuing possession and Crow’s putback was no good as time ran out.

“It’s frustrating because I felt like we deserved it,” Braves coach Andy Cretens said. “All the girls deserved it. It’s sad that it had to end here because we prepared really well and our girls really wanted it. It’s just really sad … I feel for our seniors.”

“Everyone contributed,” Beveridge said. “Taylor and Monk had double figures, Mari (Bink) was right there (eight points). It was four girls scoring more points to win. I’m so proud of them. They all did it to win.”

Crow led the Braves with 14 points and Ahlgren added 13.

Gladstone was doomed by 19 turnovers and a 1 for 13 shooting performance from 3-point range. Esky had 17 miscues but shot 5 for 7 from downtown.

“Obviously, you go back and watch film, but what I initially see is we turned it over too much and we didn’t knock down shots,” Cretens said. “They hit some big shots. Monkevich hit three 3s and she doesn’t traditionally shoot a lot of 3s. She hasn’t shot many against us the last couple years, so it’s something we took a chance on and she knocked them down.”

Esky’s 1-3-1 defense also had a lot to do with Gladstone’s struggles, just like it did in the previous meetings.

“Our defense all night was phenomenal,” Beveridge said. “They were tuned in to what we needed to do. We were up 12 and then it got tight, but the girls didn’t look tight. I think I was more scared than they were. I just said get the ball in Nicole and Taylor’s hands, take care of the ball, and they did.”

Gladstone finished 9-14 after a crazy week of ups and downs.

“It was a blast,” Cretens said. “Our girls showed their never-say-die attitude, their grit, their toughness, and their passion for the game. It was fun to be a part of. I couldn’t be more proud of the girls and what they did over this week. It was a fun ride.”

The Eskymos advanced to a regional opener against Sault Ste. Marie, where they fell 62-51 to the U.P.’s second-ranked Blue Devils at Manistique to finish their season 13-8.

The dark hole of debt