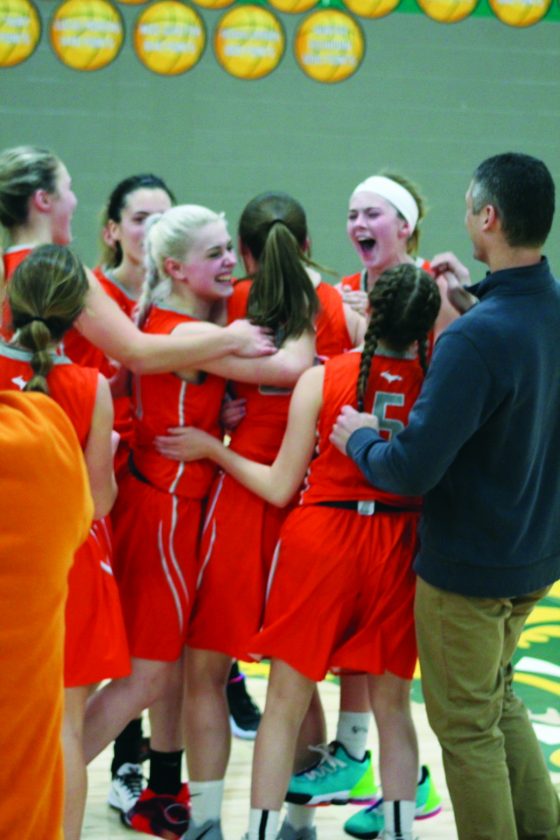 CARNEY — High school basketball games are 32 minutes long, but they’re often defined in just a few seconds. For a few players, there are select moments that will forever be remembered.

Mid Peninsula junior forward Allyson Lancour wasn’t a starter for the Wolverines, nor was the plan for her to be in the game in the closing seconds of a Dec. 6 contest at Carney-Nadeau.

But when teammate Chevy Koski fouled out, the opportunity presented itself for Lancour to make a play.

Lancour was immediately mobbed by her teammates in a game that each and every one of them will remember forever.

“Ally was in the right place at the right time,” Mid Pen coach Phil Croasdell said. “She came in for Chevy Koski, who fouled out but for good reason. Chevy was guarding 6-2 sophomore (Tessa Wagner) and Camryn (Croasdell) was guarding Sandra Boulton. It was a very physical and scrappy game. Our tenacity made up for our lack of height and size.”

The Wolves had just taken a one-point lead after Wagner made a pair of free throws with 10 seconds left, but they couldn’t hold on in their season opener.

The Wolves did just that, eventually building a 14-game winning streak and winning their first district title since 2006.

But this night belonged to Mid Pen.

The Skyline Central Conference contest went back and forth the entire way, with neither team able to create any separation. The score was tied 11-11 after the first quarter and Mid Pen held a 23-22 halftime edge before Carney took a 32-31 advantage into the fourth quarter.

“We started out kind of slow and never really got into a rhythm offensively,” Linder said. “It was just back-and-forth, back-and-forth pretty much the whole game. It pretty much came down to the last minute of the game.”

“Carney is a tough place to play,” he said. “It was probably no more than a five-point game all the way.”

“(Wagner) played a really solid game,” Linder said. “She got the ball down in the low block and got to the basket. She had 10 offensive rebounds, so she got some putbacks. She played an outstanding game.”

Kennedy Englund led the Wolverines with 18 points and Koski chipped in 10.

It was a huge bounceback win for Mid Pen, which fell to Rapid River in its season opener 40-38 just three days earlier.

“It was kind of a big letdown after losing the Rapid River game,” coach Croasdell said.

“It had been a long time since we won at Carney. This is a big confidence boost for us. It was a tough game, but we hit some clutch shots. We definitely played much better than we did (Dec. 3 against Rapid River).”

The Wolverines went on to win three more in a row and five of their next six. They finished the season 15-6 after falling to Munising 51-47 in a Division 4 district opener March 2.