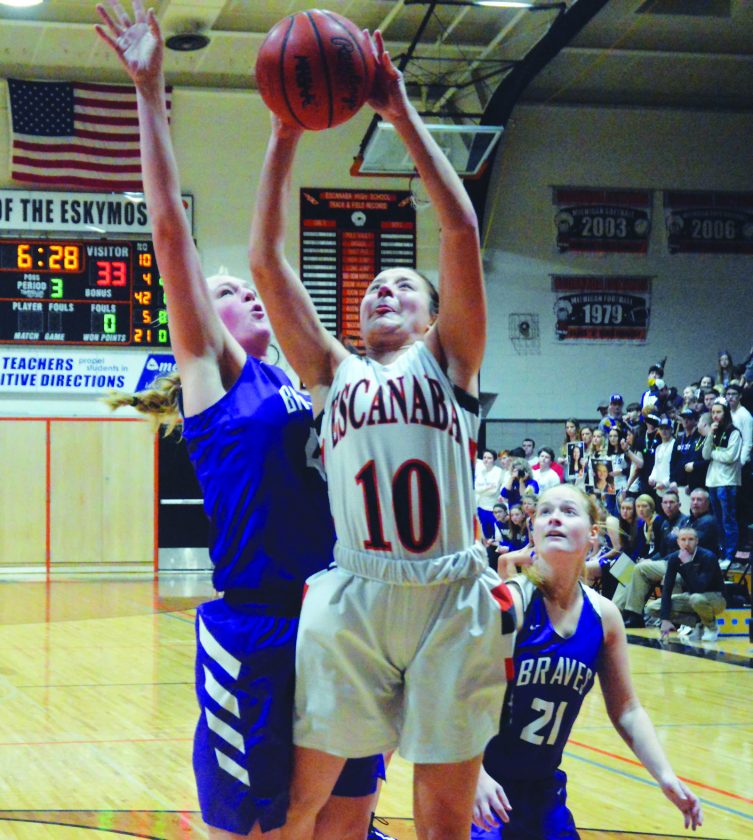 ESCANABA — In the first of three match-ups between Gladstone and Escanaba this season, the first one played in Escanaba back on Dec. 27 can definitely be argued as the best.

Walking into the Christmas break match-up, Escanaba sat at 3-3 for the season and Gladstone was 2-2. It was a game that was primed to push the rivalry even further, with one team climbing above .500 and the other falling below.

The pressure was ramped up further due to the holiday break that saw various alumni and more fans than usual pack the Escanaba gym.

The game lived up to its expectations and then some, as the Eskymos pulled out a 70-62 win in overtime.

It was a showcase of the different weapons the Eskymos had to offer, with senior Taylor Ray striking instrumental blows from beyond the 3-point line.

“Taylor, I know she’s got it, and she was kind of silent in the second half,” Esky coach Mike Beveridge said after the game. “I told her, ‘You’re a senior. Take this game on, and be a senior leader.’ She sunk that first one, and I knew the second one was going in. You could just see her confidence coming out. We needed her to step up, and she did.”

It was tied 57-57 entering overtime. The teams remained tied until Esky’s Nicole Kamin pulled down a rebound and passed it to Ray, who sank a triple to give the Eskymos a 62-59 advantage. Less than a minute later, Ray stretched that lead even further with her fourth trey of the game and second of the overtime.

“I was so nervous,” Ray said. “We were all so nervous. We knew we had to win, and we wanted to win so bad. I knew we needed those points, and it was just crazy. We worked together so well that I just give credit to my team. We did great tonight.”

Gladstone had multiple opportunities to win the game before overtime, as it failed to take advantage of a 24-point performance from Megan Crow. Crow was the only Brave to score in the extra session.

“We were just one play away from winning that game,” Braves coach Andy Cretens said. “It felt like the entire game we were just one away from breaking it open, then we’d get a silly turnover or something that’d hurt us, and we’d lose momentum.”

Crow kept the Braves in the game in overtime, but Escanaba’s addition of freshman Mari Bink in her first varsity start just outlined another tool the Eskymos had in their box.

Bink snagged a steal and scored a breakaway layup that she converted into a 3-point play with just 12.7 seconds left to seal the game.

“Mari, being the smart kid that she is, saw the opportunity and took it,” Beveridge said. “The game kind of got decided by a freshman and a senior, how cool is that? This was Mari’s first start at varsity. This is about the biggest game you get in the season. I told her, ‘This is your first start, enjoy it!’ She’s fearless. She’ll drive on anybody. It was nice to have the senior leadership but also the freshmen showing that they can play here, too.”

Ray finished with 20 points, and Bailey Barron and Bink collected 15. Kamin pulled down a double-double with 12 points and 12 rebounds.

For the Braves, Taelor Zeise notched 14 points in addition to Crow’s 24.

The game was the crucial for Escanaba’s confidence as the season progressed.

“We’re 1-0 in the conference coming into tonight, and I emphasized that to the girls,” Beveridge said. “After the game I said, ‘You’re 2-0 in the conference. People are chasing you now.’ It was huge to get that win in conference, but just to get another big game (win). It’s just a blessing, and I credit the girls. They don’t quit and they never have.”

It also gave the Braves a chip on their shoulder that they used to refine their play and, eventually, turned into a monster 46-45 upset win on the road over undefeated Menominee in a district opener on March 2.

“We talked about it,” Cretens said. “This should hurt us. If it doesn’t hurt us, then there’s something wrong. Any time you lose to Escanaba, it should hurt, but we’re always talking about continuously improving and getting better. We’d like to win a conference title, but what’s more important to us is playoffs. We’re only five games in, and we’ve got 15 left. We’ve just got to get back to work and keep working hard.”