No. 5: Eskymos, Kamin rally to stun Negaunee at the buzzer 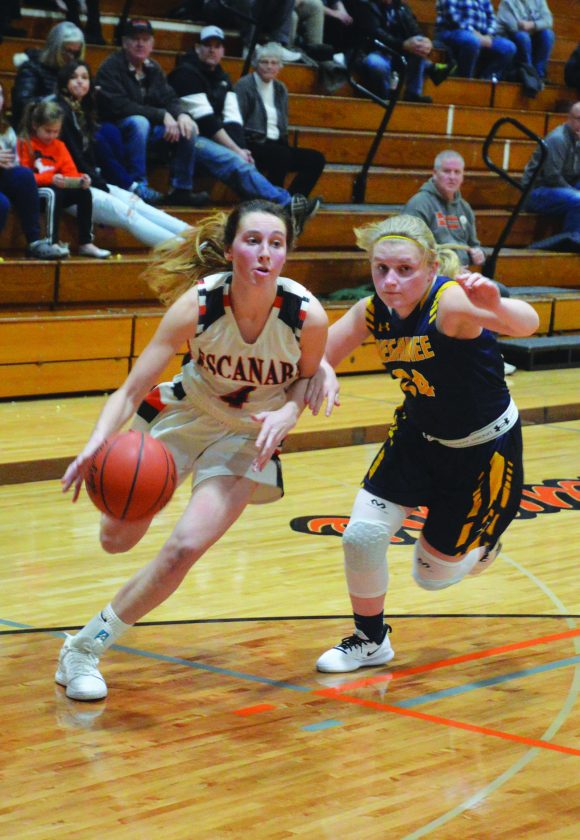 Austin Hemmingson | Daily Press Escanaba’s Nicole Kamin drives past Negaunee’s Larissa Anderson for the game-winning shot Dec. 10 at Escanaba. Kamin made a floater from the right side of the basket over two Negaunee defenders to beat the buzzer to lift Esky to a 50-48 win.

ESCANABA — If there were any doubts about how good the Escanaba girls could be this past basketball season, they were quickly answered in just their third game back on Dec. 10 in a 50-48 win over Negaunee.

This one showcased all the ingredients they would use to be successful the rest of the year — Nicole Kamin’s ability to take over a game, big shots by Taylor Ray, surprising performances from the underclassmen and an ability to rally from double-digit deficits.

In what was a perfect microcosm of their season, the Eskymos trailed a really good Negaunee team 42-31 after three quarters.

Ray jump-started the Eskymos with a 3-pointer on their first possession of the fourth quarter. They rallied to pull within five a few different times before Nicole Kamin pulled them within 48-46 on a pull-up triple from the top of the key with 55 seconds left.

Out of a timeout, they utilized a full-court press as freshman Mari Bink came up with a steal and dished it to Ray for a layup to tie the score at 48. After getting another stop on the defensive end, Esky got the ball back with a chance to win it.

“You draw it up and you say this is what we need to do, and we did it,” Esky coach Mike Beveridge said afterwards. “We were too far behind to make something happen, and for everything to happen to turn out the way it did was kind of incredible because the girls just never quit. You could see their effort was there. We got the turnovers, we got the easy buckets, we got some key rebounds… It just felt good because they started playing better basketball, and you just hoped they had a chance at the end.”

All Kamin needed was a chance.

Out of another timeout, Ray ran the clock down until there was 10 seconds left, then had the ball knocked out of her hands on a drive. Bink recovered the loose ball and got it to Kamin, who drove down the right baseline and flipped up a game-winning floater over two Negaunee defenders at the buzzer.

“Taylor got the ball and I had two screens coming my way,” Kamin explained. “I went around, and then we kind of lost the ball, but we got it back. It got to me, I got by my girl, and then I kind of got a lucky shot.”

The so-called “lucky shot” wouldn’t have mattered if Esky couldn’t fight its way back into the game, something Miners coach Mike O’Donnell noted.

“When you let a team hang around and hang around, (bad things happen),” he said. “I thought we had it to the point where we could pull away from them a couple times in the second half, but credit to Escanaba. They kept grinding and grinding and stayed close enough, and you just had that feeling that, ‘Oh boy, this is going to come down to the wire,’ by the way it was going, and it did. You let a team hang around long enough, that’s usually how it goes — they end up hitting a shot at the buzzer to beat you. You see it all the time.”

Ray led Esky with 17 points, while Kamin added 15. Alyssa Hill had a game-high 24 for Negaunee, while Chloe Norman chipped in 11.

The first half was a game of runs. Esky started the game with the first six points before the Miners responded with a 17-0 run to take an 11-point lead midway through the second quarter. They held that lead until the final minute.

“Halfway through the third quarter it didn’t look good,” Beveridge said. “I knew Taylor had to get going, I knew Nicole had to get going, and we had some young kids out there that made some big plays. It was just one of those things where everything started to fall in place, so our confidence should be good for the next game.”

That confidence ended up being good for the rest of the season.