No. 1: Braves stun Maroons in the upset of the year 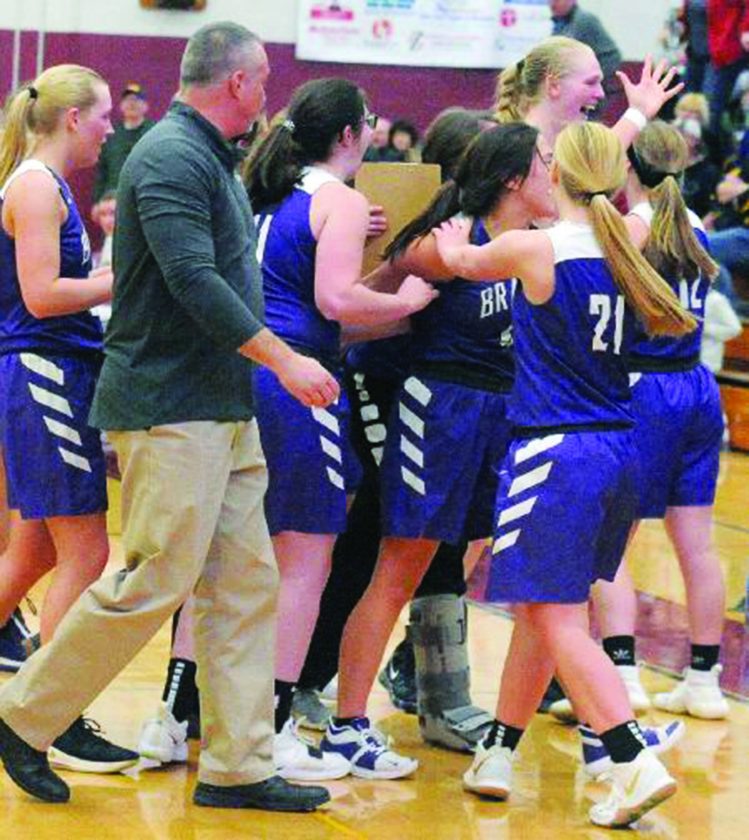 Brian Bell | Marinette EagleHerald The Gladstone girls basketball team celebrates after Andie Balenger hit a 3-pointer at the buzzer to upset the undefeated Menominee Maroons during a district opener March 2 in Menominee.

Not only that, but we never get to see the third chapter of Escanaba and Gladstone without this upset in the district opener back on March 2. In a spring where the sports world was essentially robbed of March Madness due to the coronavirus outbreak, this is the closest thing we got to it.

This is one of those games where you’re probably still trying to wrap your head around how it happened. Not so much that the Braves found a way to win, but how they did it.

Menominee entered the contest 20-0, the unanimous No. 1 team in the U.P. all season and the No. 3 team in the state.

Meanwhile, Gladstone was just 7-13 and the argument could be made it was the most disappointing team in the U.P. in the regular season. After all, the Maroons and Braves had just met for a district title in Gladstone the previous year, and most people expected them to be the favorites going into the district again this year.

However, Menominee was so far superior in the regular season that nobody outside Gladstone’s locker room gave the Braves a chance. It’s not that surprising when you consider Menominee won both regular season meetings convincingly — 50-30 in Gladstone Jan. 28 and 66-37 in Menominee Feb. 6.

Couple that with the fact Menominee held a 45-33 lead with 5:19 left in the game, and you start to get the full picture as to why this upset was so shocking.

The way the Braves did it was with arguably their biggest strength all season — defense, and particularly their defensive backcourt of Maddie Ahlgren and Andie Balenger. The Maroons initially got careless with the ball and the Braves were able to take advantage by converting those turnovers into easy baskets.

But when the game got tighter and the pressure got higher, Menominee went into a stall offense and tried simply to run the clock out as opposed to trying to score. This worked perfectly into the Braves’ hands, as Ahlgren came up with another steal and score to cut the deficit to just 45-43 with a little over 1:30 to play.

The Maroons then continued to stall, running the clock all the way down until there was only nine seconds left. Erin Barrette was sent to the free throw line for a 1-and-1 situation, but she missed the front end to give the Braves one last chance.

Ahlgren broke through Menominee’s full court pressure and drove down the right side of the lane, where she was forced to kick the ball out to an open Balenger on the wing. Balenger calmly rose up and buried the 3-pointer at the final buzzer, completing the comeback and leaving the home crowd shocked as the Braves ran to the middle of the court to celebrate what they had just pulled off.

“On that last play we just wanted to get the ball into Maddie’s hands and have her create, because with just nine seconds left and (Menominee) pressuring us, that’s not really enough time to set something up and run a play, so that’s just seniors stepping up and doing big things when their team needs it,” Braves coach Andy Cretens said afterwards. “Andie is the toughest competitor in the entire U.P. I have never had to get on her for trying harder. She does so many good things for us, and that shot is something special that those girls will never forget for the rest of their lives.”

Another big reason Gladstone was able to stay in the game and have a chance at the end was the play of junior center Megan Crow. Crow was unable to play in the first meeting between the teams and was limited by that same ankle injury in the second meeting before being a force in this one. She led all scorers with 18 points and grabbed 10 rebounds to finish with a double-double. Balenger added 11 points and Ahlgren chipped in eight.

“We did a phenomenal job of taking care of the ball and rebounding the ball in the second half,” Cretens said. “Megan Crow was a monster on the boards and Maddie and Andie controlled the game really well. It was everything that we have been working on all year. Our girls were gritty, didn’t give up, fought back and it just all kind of came together today. It was a special thing to be a part of.”

It’s a night the Braves will remember forever. Sure, they would have loved to finish it off by beating Escanaba for the district title after taking down Kingsford in the semis.

But this is the type of game they will never forget. Nobody in the U.P. ever will.