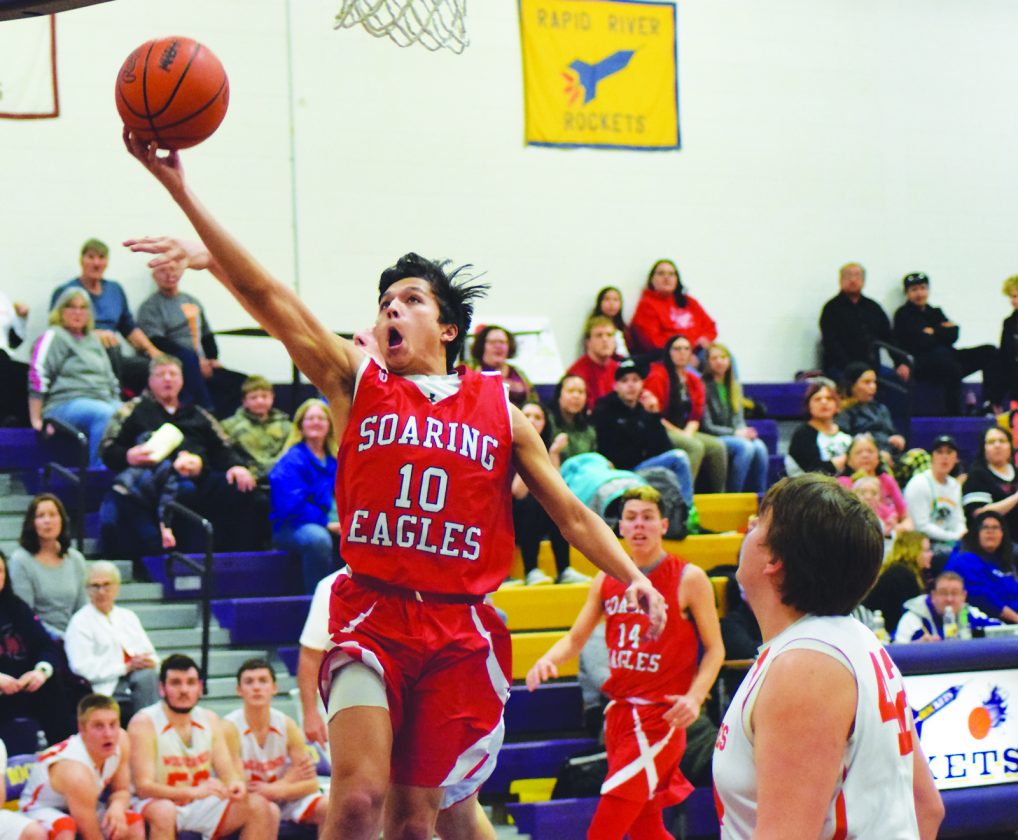 RAPID RIVER — It was a season of records for the Hannahville boys. Earlier in the season, the team eclipsed the U.P. record for most 3-pointers made in a game with 24.

Despite the winning record, the Eagles were up against a Mid Peninsula team in the district opener that they’d lost to just eight days prior by 22 points, 46-24 on March 3.

The Eagles, however, rose above the expectations to pull out a dominant 72-55 win for their first district victory in school history on March 11 in Rapid River. The district win gave them a shot at the district championship against Rapid River before play was suspended due to the coronavirus outbreak.

“This is big for our program,” Eagle said after the game. “We’ve never competed at a level like that in a (Division 4) game. Typically, we just come in to get our guys involved so (that they can build experience). I’ve got gym rats — kids who are in the gym five or six times a week — so I’m thankful to have kids with that attitude.”

The Eagles built a big lead in the first half while exhibiting what had been their strength all season — shooting.

Leading 17-11 after the first quarter, the Eagles kept ahead with the help of Joe Larson — the team’s leading scorer with 28 points.

“(Winning) feels great,” Larson said. “It’s crazy to think that. There’s a first time for everything (going to the district championship).

“Everybody always said, ‘Oh, it’s just Hannahville,’ but it feels so good that we have respect now.”

In the second quarter, it became obvious that the Soaring Eagles’ tempo and aggression began to take a toll on the Wolverines as almost half of their points came from the free throw line.

Hannahville held Mid Pen scoreless for almost half the quarter. The Soaring Eagles used this opportunity to build a 35-24 halftime lead that they wouldn’t relinquish in the second half.

“(Although) I’m never satisfied, I have to be happy with our energy and our activeness toward the ball,” Eagle said.

“Off the ball, we had great help defense. There were a couple periods where we were in help position the whole time, and either you’re going to force up a long shot or try to force it inside. Overall, I’m super proud of them.

“I’m super proud of our community. We have awesome fans. They followed us everywhere no matter where they’re at.”

Zach Englund, who reached 1,000 career points in the first half, seemed to be the only Wolverine who was able to get to the basket. He was the game’s leading scorer with 32 points.

“I really, really thought my kids did a tremendous job all year,” Wolverines coach Mark Branstrom said. “They really played from the heart, and I think you could see that tonight, too. Zach Englund was representative of that tonight. He played his rear-end off.”

Hannahville is still waiting for a decision from the MHSAA in regards to whether or not its season will continue. Mid Pen finished its season 8-13.