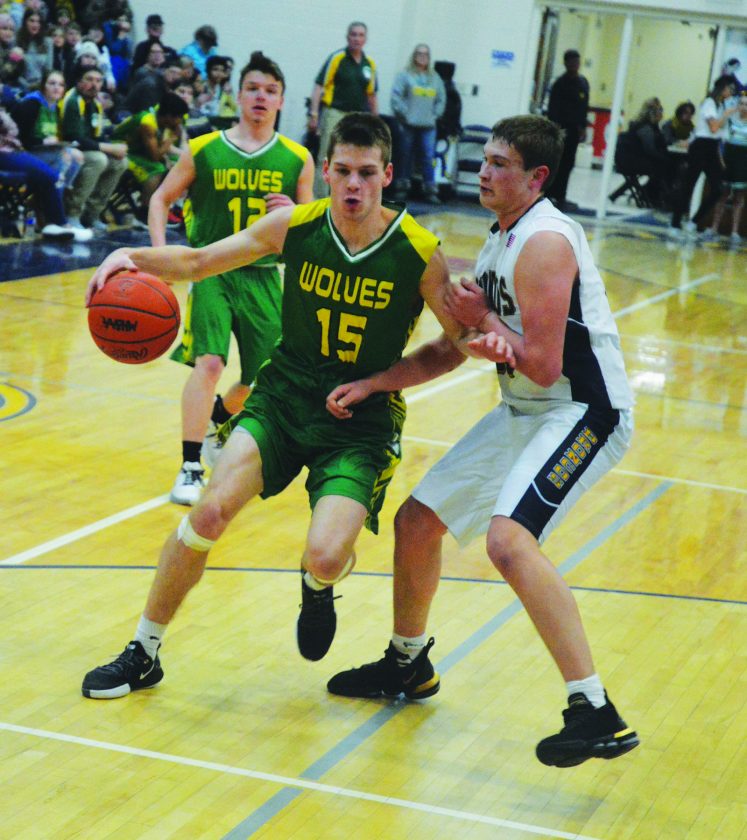 HARRIS — Lost in the fact that this was the game Carney-Nadeau senior point guard Brett LaFord eclipsed 1,000 career points was that this game was actually really good just by itself.

The lead changed hands multiple times and it came right down to the closing minutes in this match-up of Skyline Central Conference rivals before the Wolves held on for a 62-56 road win over Bark River-Harris back on Feb. 18.

Carney led 51-43 after a fast-break layup by LaFord with 6:22 left, but the Broncos scored the next six points to pull within 51-49 on a lay-in by Trenton Wood-Keshick with 4:15 to play. After LaFord knocked down a pair of free throws, Zach Robinette tripled from the right wing to pull the Broncos within one.

Brayden Kakuk then answered with a clutch triple of his own from the top of the key, and LaFord reached the 1,000-point mark with a pair of free throws with 1:48 left to give the Wolves a 58-52 advantage. Beau Koffman then sealed the game with a tough layup in traffic to give Carney an eight-point cushion with 1:25 remaining.

“This is a tough place for us to play. Bark River’s got a pretty quality team as far as our match-ups here,” C-N coach Paul Polfus said. “I was very, very happy with this win tonight. I thought our kids did the things down the stretch we needed to do that we weren’t doing earlier in the year.”

The Wolves entered the fourth quarter leading 46-41, with LaFord just six points shy of the milestone with his family in attendance. He admitted it was a tough balance between trying to reach that mark and still being able to focus on closing out a game.

“That was definitely tough,” he said.

“I had to control myself, because coming down to the end there I (needed) like four points with four minutes left… It was probably one of the hardest things I ever did.”

BR-H got off to a fast start, jumping out to an 8-3 lead in the first three minutes of the game.

“I was happy with our effort and the way we came out and played,” he said. “I think it came down to some key turnovers, and they hit some shots when they needed to… We didn’t hit some shots when we needed to. I knew coming into this game it would be a close game. Obviously, I would have liked the score to have been the other way, but anytime we play them it’s a tight game.”

LaFord led the Wolves with 17 points and Max Baumler added 16. Koffman chipped in 14, while Kakuk had 12.

Riley Bray led the Broncos with a game-high 20 points and Wood-Keshick added 12.

This game was used as a springboard for both teams, as the Wolves won their third straight. They haven’t lost since Feb. 8 and are currently on a seven-game winning streak as they await the MHSAA’s decision to see if postseason tournaments will resume. If they do, Carney is scheduled to visit North Central in the district final.

On the flip side, the Broncos went on a four-game winning streak after this contest before falling to Munising in a district opener March 9.