No. 7: Eskymos top Redmen for first time in a decade 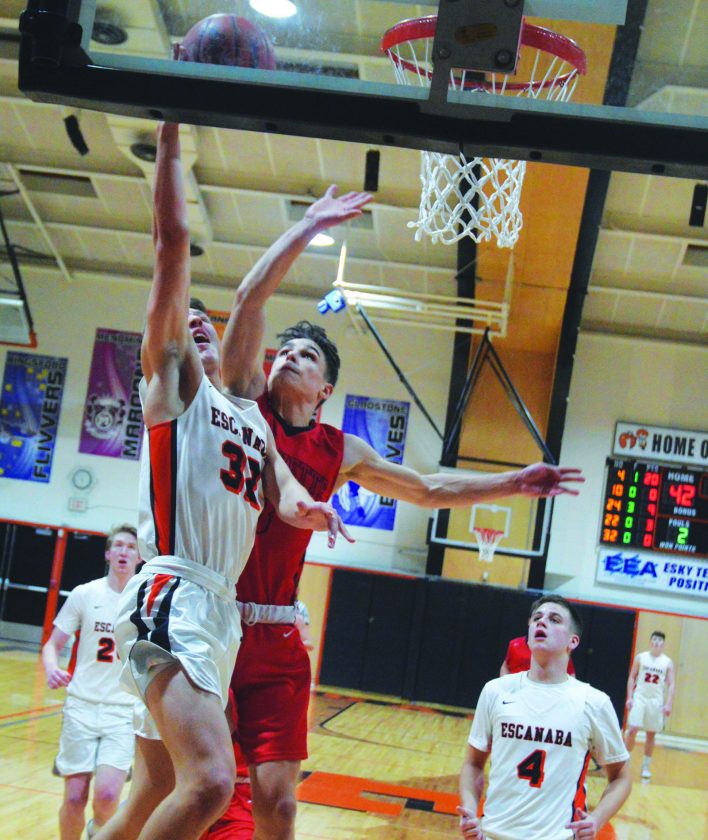 Austin Hemmingson | Daily Press Escanaba’s Bryant Maki attempts a layup while being fouled by Marquette’s Kameron Karp Jan. 7 at Escanaba. Looking on for the Eskymos is Brandon Frazer (4).

ESCANABA — Entering the season, the Escanaba boys knew they had to do something they hadn’t done in a decade if they wanted to have any shot at winning the Great Northern Conference — beat Marquette.

That finally changed Jan. 7 in Escanaba.

Led by a career-high 24-point night from junior point guard Brandon Frazer, the Eskymos put together one of their most complete performances of the year in a 63-56 victory over the Redmen. At the time, Esky improved to 3-0 in the GNC while the Redmen fell to 1-1.

“We wanted to take a step tonight toward trying to compete for a championship,” Esky coach Tracy Hudson said. “This was one of the big steps you have to make — you have to beat who you think is the favorite in your home gym. We know when we go up there it’s going to be an unbelievable war, just like it was here tonight.”

Nothing came easy for Esky in this one, starting with 6-foot-7 big man Carter Hudson picking up his third foul less than a minute into the second quarter with the Eskymos trailing 23-18.

But instead of rolling over, Esky went to a small lineup and went on a 12-3 run to go into halftime leading 30-26.

“I thought basically the biggest story was overcoming adversity,” coach Hudson said. “We got our big man in foul trouble and we went to a small lineup to try to match their quickness. I just felt like we had to go with that small lineup… Not only did we weather (the storm), but we actually took the lead. I thought at the end of the first half where we were playing some different combinations, we kind of overcame adversity and I told the kids in the huddle that if you want a chance to win a Great Northern (title), you have to overcome this adversity, and let’s do it.”

But as champions do, the Redmen came out of the locker room refocused and started the half on a 13-3 run.

The Eskymos, however, went on their own 12-4 run to retake the lead heading to the final quarter.

“That’s a credit to them,” Redmen coach Brad Nelson said. “We’d go on a run and have a little lead where you feel like you’re trying to get in a little comfort zone, and then (Peyton) Fedell would come down and nail a 3 or Frazer would come down and make a big shot. Credit to them to make those shots. I just thought we didn’t have enough in the tank and we made a few too many mistakes, but for them to answer any run … give them a lot of credit.”

After Esky scored the first seven points of the fourth quarter to take a nine-point lead, Marquette rattled off six straight to pull within 52-49 on a pair of free throws by John Thomson with 3:58 remaining.

The Eskymos then answered once more with a 7-2 run to gain a 59-51 cushion with just under two minutes left. Marquette had one last chance after pulling within 61-56 on a layup by Thomson with 21 seconds remaining, but Frazer sealed the game at the charity stripe.

In addition to his 24 points, Frazer added eight rebounds, five steals and two assists. Fedell chipped in 15 points and Hudson had 11.

“Coach Hudson came out with a good game plan — poise and determination,” Frazer said. “We wanted to take first in the GNC, so as a team we played better. I couldn’t have done it without my teammates and coach Hudson.”

Ty Lotterman and Lincoln Sager led Marquette with 15 points each. Kameron Karp and Thomson each added 10.