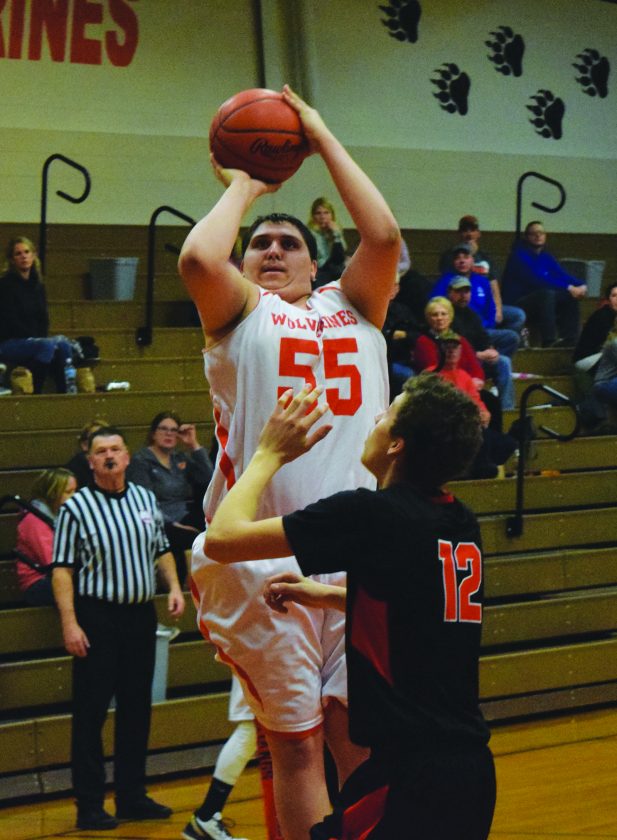 “I’m very happy with our defense,” Mustangs coach Terry Kienitz said. “It’s been getting better and better every game. We’ve been holding some good opponents to low scoring. We have the team to do it though. We have quick guards, and we have size. We have the total package when it comes to the defensive end. We usually find the match-ups that help us to do that, too. I’m very happy with it.”

Nebel got the Mustangs started again after halftime with a triple just over 30 seconds in, and Joshua Huotari went 1 of 2 from the free throw line to make it 38-12 just over a minute into the third.

“Our defense was leading to offense,” Kienitz said. “We got some steals, turnovers and long rebounds, and we were off and running. Offensively, I think we moved the ball well. Kane Nebel had five 3s, so that really helps to keep them honest and not pack the paint. It was definitely a team effort though, and it was nice to see.”

Mid Pen showed a little life 30 seconds later when Zach Englund cut his way to the basket for a layup and assisted Dylan Trudell for another layup on the next possession.

“(We were) deer in the headlights,” Wolverines coach Mark Branstrom said. “The kids didn’t meet the call when they went out there (in the first half). Munising executed as we expected them to, but we could’ve played 50 times better in the first half. We just dug ourselves too deep of a hole.

“They had to re-adjust at halftime. I was very proud of them with how they came back out after halftime.”

The Wolverines reduced their deficit to 46-23 at the end of the third, but they never truly threatened the rest of the way.

“We’ve got to learn from this,” Branstrom said. “If we can deal with Munising even halfway decently, it’ll be great against other guys.”