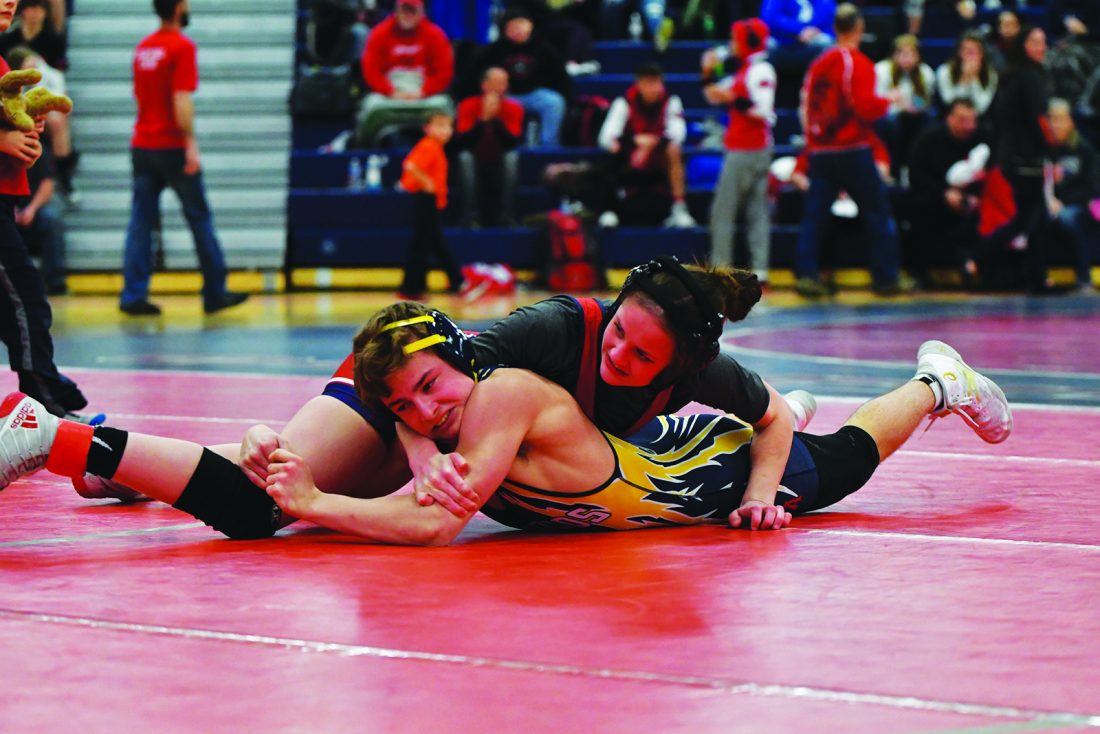 ISHPEMING — What an exciting time to be part of the Bark River-Harris wrestling program.

Six BR-H grapplers reached the podium here Saturday by placing among the top four in their respective weight divisions in the Division 4 individual district tournament, just two days after they earned their first team district title.

The Broncos travel to Onaway to face the host Cardinals in a team regional opener Wednesday. The six qualifiers then go to Charlevoix for Saturday’s individual regional.

BR-H freshman Drew Allgeyer hung on for a 9-7 victory over Onaway’s Brendan Fenstermaker in the 145-pound title bout.

Allgeyer gained a 9-2 advantage on a reversal with one minute, 20 seconds left in the match.

Fenstermaker then got a reversal and near fall in the closing moments.

“That was an exciting match,” said Allgeyer, who’s battling breathing issues due to asthma. “I had some real good scrambles, then I got a little scared in the end. He’s an amazing wrestler. He can roll anyone over. I’m super glad I came out early and was able to finish my techniques. I like to wrestle people I’m not used to. He wrestles a different style (freestyle). You don’t see that in the U.P. I’m really grateful to have this opportunity.”

Junior Tyler Racicot reached the 152 title bout where he got pinned in 62 seconds by Onaway junior Seth Enos.

“He’s very strong and fast,” said Racicot, who placed fourth as a freshman two years ago. “He definitely deserved to take first here today. I had a good day. There’s a big difference going down there as a two seed versus a four seed. This gives me more confidence, plus I know what to expect. I didn’t qualify last year, which definitely motivated me.”

Sophomore Avry Corrigan (103) also reached the championship round where he was pinned by Rudyard junior Bradley Hall in 78 seconds.

Manistique senior Isaac Brewster got pinned by Ishpeming senior Ethan Sigala 3:23 into the 285 final and classmate Tony Williams (130) was pinned by Gwinn freshman Dustin Luoma at 3:56.

Also qualifying for the Emeralds were sophomore Mckabe Swanson (215), who placed third, and junior Ryan Korva (160) in fourth.

“The boys wrestled really well today and I’m proud of them,” said Westwood coach Dan Carlson. “Tyler really stepped it up today. He wanted to place and Jackson is really having a great season. Jackson just received his 100th win the other night, so it was great to see him on the podium.”

Patriots’ senior Rocco Carlson is no longer wrestling after suffering his third concussion at Gaylord two weeks ago.

“Rocco received a couple nasty head butts and they ended his career,” said coach Carlson. “After 16 seasons, he had to make the agonizing decision to stop wrestling through no fault of his own. Rocco was just five wins away from reaching All-American status and was predicted to be on the podium at the state tournament. In his words, ‘I can’t risk my brain for the rest of my life.’ Rocco will be attending Michigan Tech in the fall to study engineering, so we believe he made the correct decision, albeit heartbreaking.”