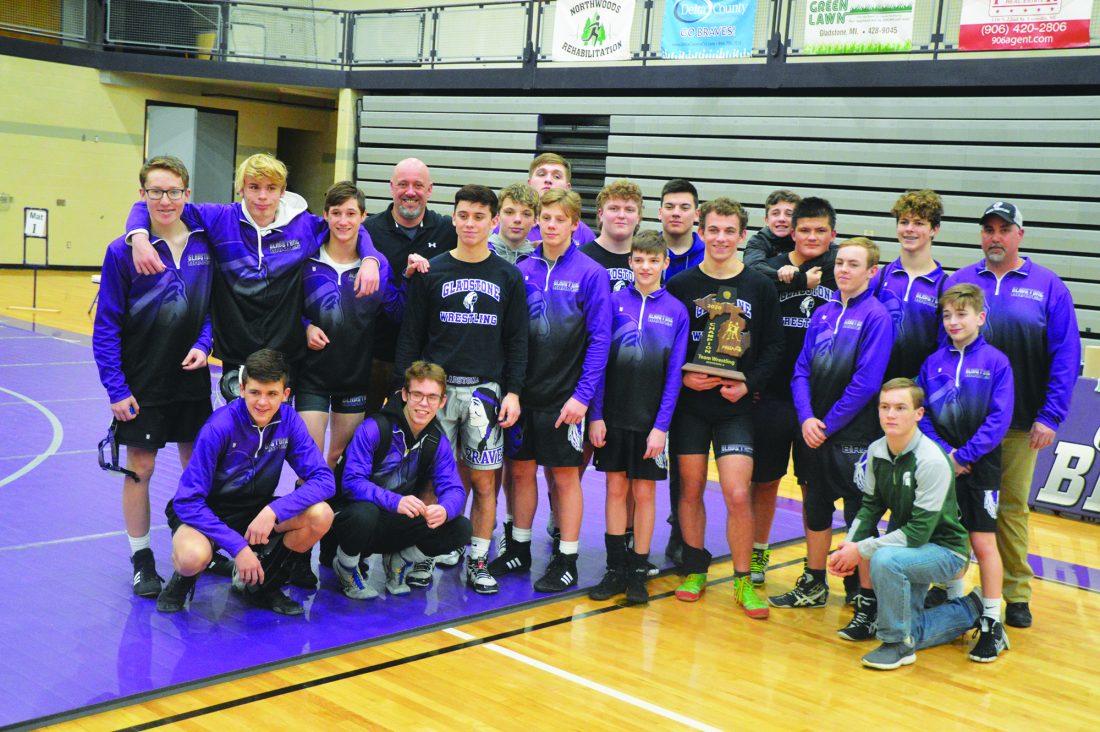 GLADSTONE — The Gladstone wrestlers earned their 11th straight district championship here Wednesday night in a hard-fought 48-31 victory over the Negaunee Miners in a Division 3 final.

In the next bout, sophomore Brett Boudreau (285) pinned Bryce Dunstan at 5:55, enabling the Braves to seal the deal.

The victory sends the Braves to the team regional at a downstate site to be determined where they’ll open against Grayling Feb. 19.

“We knew it was going to be a tough match,” said Braves’ coach Jeff Brazeau. “In the first one, we won by nine points (Dec. 19) at Iron Mountain. After Brett got that pin, we knew we won the district. Negaunee has a lot of wrestlers and young guys on their team. They’ll be good to come.”

Boudreau led 2-1 after the opening frame, then extended his lead to 4-1 on a near fall at the end of the second period, setting the stage for the decisive third stanza.

“He’s hard to pin,” said Boudreau. “I pinned him three times this year, but this one was the toughest. I think he’s just a strong guy. They have a lot of kids and they’re all pretty good wrestlers. I didn’t realize we were that close to winning the district at the time. The (chicken) wing was there the whole time and I finally got it to work in the end.”

The Braves appeared to be in the driver’s seat after senior Cole Hansen (160) needed just 36 seconds to pin Thomas McCollum for a 30-18 cushion.

“Not getting pinned there was huge,” said Brazeau. “The kids needed that. Avoiding the pins gave them some confidence and Peter (Noblet) came out ready to go. The kids wrestled great. Now, they’re looking forward to Saturday (individual district at Grayling).”

Gladstone beat Menominee 72-11 in its opener and Negaunee advanced with a 54-28 triumph over Kingsford.

Menominee got on the board when Aiden Smith pinned Brennon Detiege 5:18 into the 135-pound match and Tyler Huesinger (140) followed with a technical fall (19-4) over Andrew Sargent, trimming its deficit to 24-11.

Gladstone took four forfeits and recorded four pins in the remaining bouts, including one in which Servant (189) needed just 12 seconds to pin Pedro Montoya.

“Things didn’t go our way in a couple lighter matches,” said Kingsford coach Darren Groleau. “Ethan wrestled very, very well at 171, but ran into a real tough opponent. The guys gave a good effort overall. Only, we’re green and inexperienced and it showed. Plus, you can’t give up 24 points in forfeits and expect to win. It will be interesting to see the match-ups in the individual district. Hopefully, we’ll get a few guys through to the regional.”

RAPID RIVER — Putting the basketball through the hoop was difficult for the Rapid River girls here Tuesday night ...

Braves unable to contain No. 2 Miners

NEGAUNEE — It was a tough night for the Gladstone boys here Tuesday as they dropped a 75-43 basketball decision ...