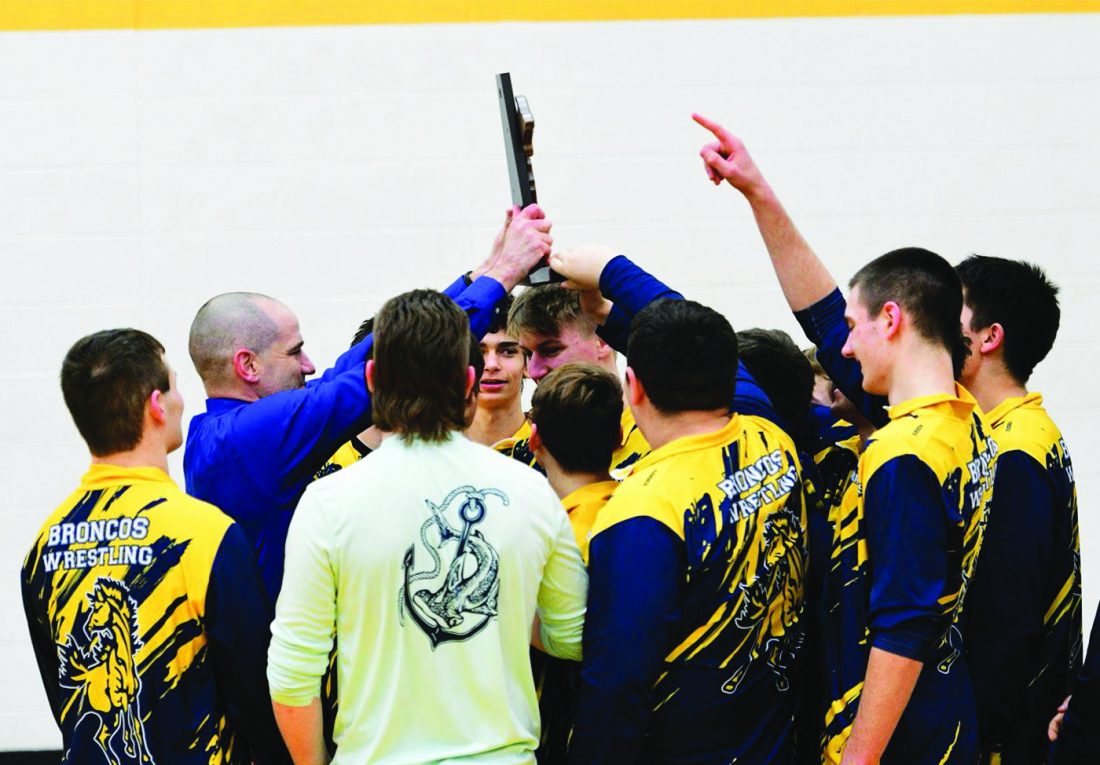 The Broncos, who co-op with the North Central Jets, entered a wrestler in every weight class but one (135), at which the Emeralds didn’t fill that weight class either, causing a double forfeit.

Alex Kern won on forfeit for the Broncos (215).

“I knew coming in this evening that no matter who we faced in the finals, we’d have a strong and very true chance of winning this thing,” said Broncos head coach Joe Racicot. “It was a matter of having enough healthy wrestlers to fill all but one spot, and things worked out well for us.”

When asked about the aforementioned co-op with the Jets, Racicot said, “Having the co-op means increased numbers. Having increased numbers means a better team in most cases. We fielded 12 kids from Bark River and four from North Central, which meant for the first time in program history we had more kids than weight classes.”

The Broncos have 10 wrestlers who are in their first year of wrestling at any level.

“No prior high school experience, no youth wrestling, none whatsoever for 10 of our 16 kids,” said Racicot.

“We were shorthanded today in both duals with a lot of first year wrestlers. We’re trying to get better with each match,” said Manistique head coach Mat Gonzalez. “We gotta hit the weight room this summer. We have to improve our physical strength and mindset. I see potential in the kids I have returning.”

In Racicot’s first year as head coach two seasons ago, BR-H defeated Munising in the district semifinals, then lost to Manistique on the 12th and 13th tiebreakers to fall short of a district trophy. Thursday night’s win was sort of redemption, Racicot noted.

Both coaches look to have their wrestlers get some good experience Saturday at individual districts at Westwood High School. Racicot is confident the Broncos will have a few wrestlers get through and move on to the regionals in Charlevoix on Feb. 22.

As a team, Bark River moves on to face Onaway in a Division 4 Regional 125 semifinal at Onaway on Wednesday. Newberry and Westwood will face off in the other semifinal. The regional winner will move on to the team finals at the Wings Event Center in Kalamazoo on Feb. 28 and 29.