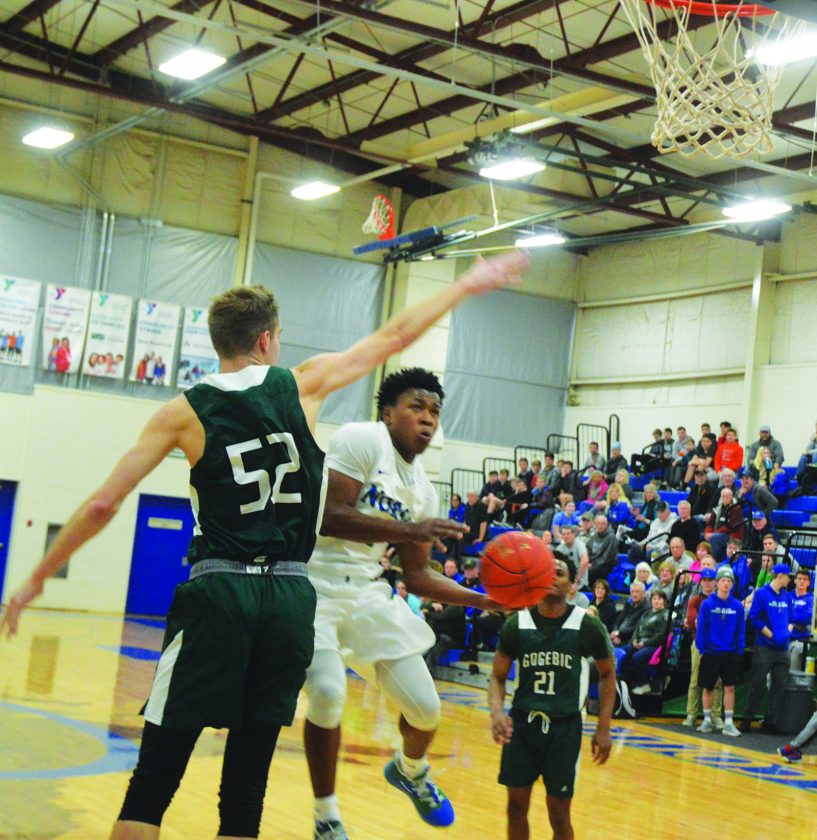 Austin Hemmingson | Daily Press Bay College’s Khalid Fleming drives in for a layup underneath the outstretched arm of Gogebic’s Gavin Ransinici (52) during Wednesday’s game at Bay College. Looking on for the Samsons is Raquentez Woodley (21).

ESCANABA — Basketball is often referred to as a game of runs.

The Bay College men came up with one which lasted nearly the whole second half here Wednesday as they rallied past the Gogebic Community College Samsons 83-58 for their sixth straight victory.

“At halftime, I gave the guys probably one of the most upbeat messages I have,” said Bay coach Matt Johnson. “When we ran our stuff in the first half, we were getting good looks at the basket. We wanted to make sure we got back to that in the second half. We did a great job defensively. I’m happy with the way we competed.”

Gogebic led 36-30 following a jump shot from the lane by Dachau Lyle early in the second half.

The Norse responded with nine unanswered points, taking a 39-36 lead on a layup by freshman guard Chris Dobessi with 15 minutes, 55 seconds left in the contest.

Gogebic tied the score 43-43 on a 3-point shot by Yaser Kahn with 13 minutes remaining.

The Samsons shaved their deficit to 54-47 on Lyle’s shot from underneath with 11 minutes left.

“We just didn’t score in the second half,” said Gogebic coach Dennis Mackey. “They took a little more physical approach and we didn’t handle it real well, something we’ve experienced a few times this year.”

In the beginning, it appeared the Norse were going to run away with this one as they raced to a 17-2 advantage behind five 3-point shots by freshman guard Matt Wagner.

“We played great at first,” said Johnson. “You want to start like that. We executed well, but Gogebic made plays. Dennis’s teams always play hard. They weren’t going to roll over for us. They have tough kids up there.”

Bay still led 24-17 midway through the first half before Gogebic surged ahead with 12 unanswered points.

The Samsons gained a 29-24 lead on a 20-foot jumper from the left wing by Raquentez Woodley less than three minutes before halftime.

Wagner’s jumper from top of the key brought the Norse within 29-27.

Gogebic then gained its biggest lead at 34-27 just 25 seconds before the intermission when Emmanuel Ige sank a three-foot jumper.

“I wanted to go out there and get my rhythm back,” said Wagner, who scored just four points in a 70-60 victory at Alpena Saturday. “I didn’t shoot well at Alpena. We came out with a lot of energy, then we kind of relaxed. Coach wasn’t too happy with our turnovers in the first half. He told us to come out and win the first three minutes of the second half, then play with a lot of energy. The second half was huge for us, especially with another big game coming up on Saturday.”

The Norse had 15 turnovers, including 11 in the first half. They ended with a 42-36 rebounding advantage and hit 29-of-70 field goals. Sophomore forward Christian Alexander collected 11 boards.

Lyle scored 14 points. Woodley hit 12 and Borseth had nine for the Samsons, who sank 21-of-63 shots and committed 15 of their 23 turnovers in the second half.

“For 14-15 minutes in the first half, we did a good job not turning the ball over,” said Mackey. “Then, we turned it over too many times and didn’t get the shots we wanted. We just didn’t execute very well in the second half. We made some ill-advised decisions against their press. We need to keep working on the basics.” 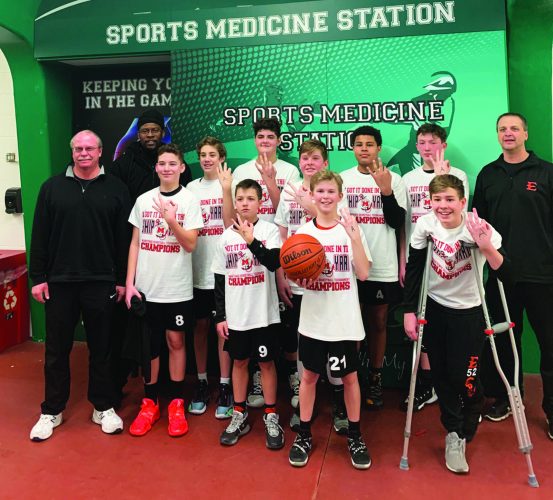