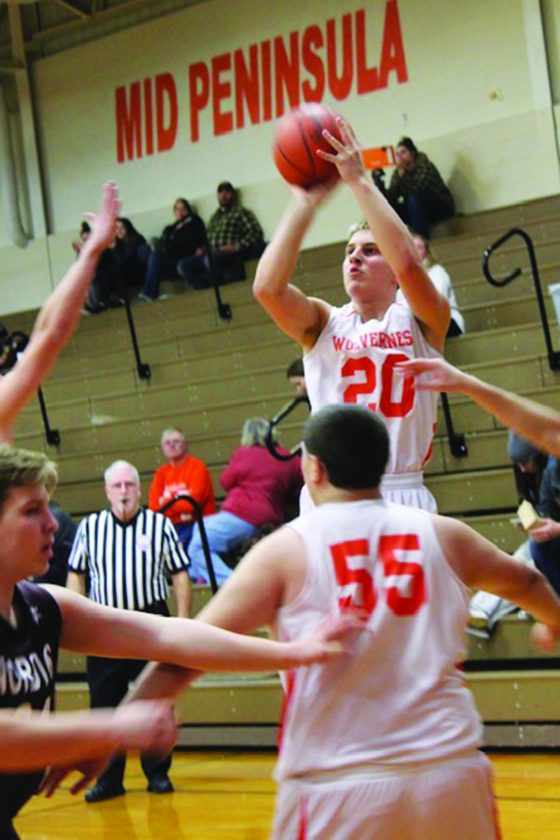 ST. NICHOLAS — A defensive switch put a little extra spring in Mid Peninsula’s step in the second half here Thursday night as it rallied past North Dickinson 51-49 in a match-up of Skyline Central Conference boys basketball teams.

The Wolverines trailed 28-18 at halftime prior to changing from their traditional man-to-man to full-court pressure defense in the third quarter.

“We knew we had to do something different,” said Mid Pen coach Mark Branstrom. “I can’t say enough about how the game swung.”

The Nordics still led 32-22 early in the third stanza when sophomore guard Maximus Mattson sank a pair of free throws.

Mid Pen finished the third with a 12-2 run, tying the score 34-34 on a free throw by freshman guard Mike Englund.

Englund then drained a 25-foot jump shot to open the fourth frame, giving the Wolverines a 37-34 lead.

The Nordics regained the lead at 40-39 on a layup by senior Cameron Schultz midway through the fourth and made it 41-39 on a gifter by junior Colin Graham with three minutes, 27 seconds left to play.

A free throw by Schultz followed by a running four-foot jumper by junior Brennan Donaldson enabled the Nordics to pull even at 44 with 1:58 remaining.

The Nordics didn’t just go away. Schultz drained a jumper from downtown with 6.3 seconds left to pull them within 50-49.

Senior Dylan Trudell then split a pair of free throws and the Wolverines secured the decision by gaining possession in the final moments.

“I’m proud of our effort,” said Nordics’ coach Chris Mattson. “We just didn’t play smart enough, which is partly my fault. I felt I made a couple errors with the game. I like the way we came out in the third quarter. Only, we didn’t handle their pressure. Their young guy hit a couple 3s, which gave them some energy.”

The Nordics led 28-15 following a 21-foot set shot by Graham 12 seconds before halftime.

Mike Englund then brought the Wolverines within 10 points with a trey moments before the intermission.

“The 3-point shot before the half was huge,” said Branstrom. “That got us within 10, which gave us a little momentum and made everything more manageable. The best thing for us is having Mike McClain and Ben Lehtikangas back. Both have been out for five games. Ben really helped us inside. Without them we would have never been there. They (Nordics) did a good job protecting their basket in the first half. Schultz had whale of a game and Maximus is a good ballhandler.”

“Cameron had a nice game and Colin did some nice things and scored his first varsity points (seven),” said coach Mattson. “We have a young team. This will go down as a learning experience for us. It was a tale of two halves. We shot just 52 percent from the line, which is not enough to win a close game.

“Mark did a great job with his kids. I thought they did a nice job keeping us off the boards in the second half. They hustled their tails off and deserved to win.”