Broncos cruise past Munising at home 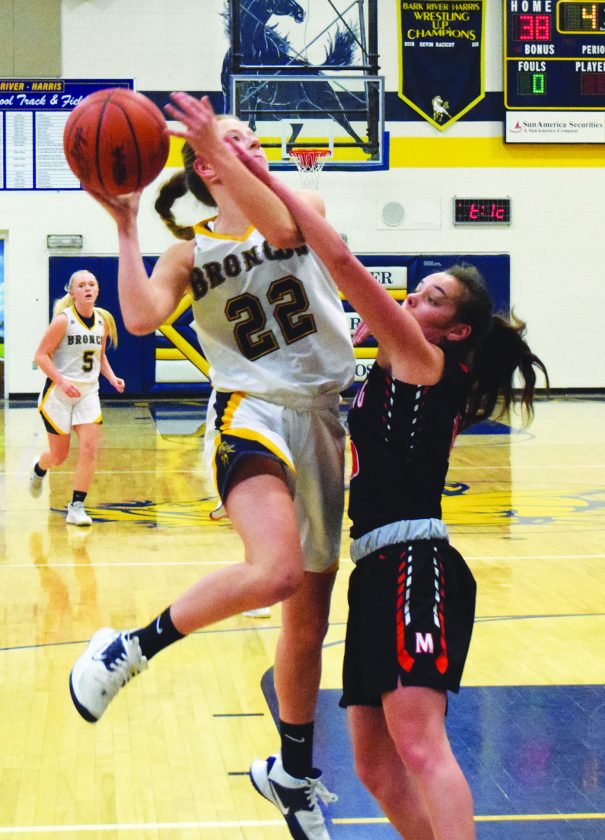 Despite going just 1-for-7 from the free throw line in the first quarter, the Broncos (5-3, 4-2 SC) led 10-4 after a shot by Aspen Fredrick with an assist from Allison Richer with one second left in the opening frame.

“It’s hit or miss sometimes with free throws,” Broncos’ coach Matt Richer said. “Usually it seems like we’re 80% or 20% with no in-between.”

The Broncos pulled ahead 16-6 with a fast start to the second quarter, then extended their advantage with a 7-0 run, capped by back-to-back triples from Sierra Debelak and Richer to lead 23-6 with 2:43 left in the half.

“I don’t know if we so much wore them out, but we started to understand what they were trying to do — trying to get the ball to the post,” coach Richer said. “The girls had a lot of good reads defensively, and we got some easy buckets there. We finally hit some shots, and it kind of opened up everything. We had a lot of fun after that second quarter.”

The Mustangs (5-5, 3-2 SC) were hindered by losing point guard Jenna Matson with an ankle injury during the second quarter.

“Obviously, your point guard going out doesn’t help things,” Mustangs’ coach Matt Mattson said. “It took us a little time to adjust. I thought my girls fought pretty hard down the stretch. We might have been overmatched a little bit, but we fought hard at least.”

Megan Matson scored four points and Alivia Killips sank one from the line to pull Munising within 29-11 at the end of the first half.

“We were (4-for-17) on free throws in the first half, and we missed some bunnies,” Mattson said. “Bark River started hitting some 3s, and we were kind of gambling in the zone (defense) — that’s not our normal style. Finally, they hit some 3s and extended their lead.”

The Broncos cruised in the second half.

“We got some quality minutes for all the girls tonight, so it was good to see,” coach Richer said.

“It’s about time (to see success with shooting). I see these girls shooting in practice, and we’re working hard at it. We’re getting better everyday, and we finally brought it into the game. My girls all work hard. We have a huge game against Gwinn Thursday, so hopefully that hard work will pay off.”

The Mustangs were led by Megan Matson with 20 points.

Debelak and Cara Zawacki led the Broncos with 12 points apiece.

“I’m proud of my girls. We kind of preach attitude and effort, and I thought that was there the entire time.”

ESCANABA — The Escanaba gymnasts are about to enter uncharted territory March 7 when they make their first ...