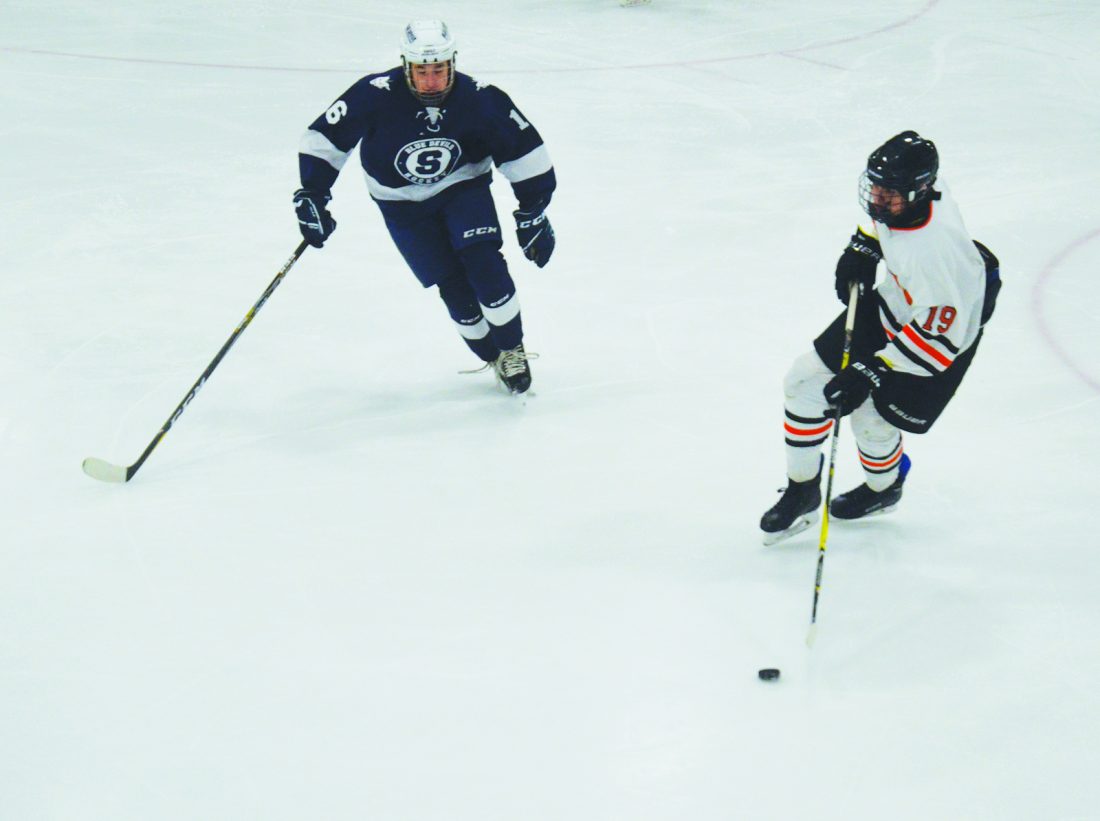 WELLS — It was a mix of good and bad for the Escanaba Eskymos in a 7-2 hockey victory over the Sault Ste. Marie Blue Devils Saturday at Wells Sports Complex.

The good came early, as the Eskymos (3-2) scored five goals in the first 10 minutes of the first period to take a 5-0 lead.

The bad came after, as Esky allowed the Blue Devils to creep back in and cut their deficit to 5-2 early in the second period in a game that became a sloppy fight to the finish.

The Eskymos, who beat the Blue Devils 9-1 Friday, got on the board first at the 2:57 mark of the first period on a shot from the doorstep by freshman Trevor Streichert. Thirty seconds later, Kobie Petrich scored on a wraparound shot from right in front of the right side of the goal for a 2-0 lead.

Esky’s hot start continued five minutes later on a goal by senior Ethan Silverstone. After a Sault penalty, Sawyer LaMarch fired in a one-timer on the power play for a 4-0 cushion, and Streichert made it 5-0 on an unassisted goal just 15 ticks later.

“We had a great start,” Esky coach Matt Hughes said. “We started fast, we scored three minutes into the game, and then obviously we were up 5-0 after the first period, so were able to put a lot of good plays together. Kids capitalized on chances that we got.”

It appeared the Eskymos might roll to their second straight mercy of the Blue Devils, but the Sault wouldn’t go down without a fight.

Elijah Crow scored for the Blue Devils (0-6) at the 1:22 mark of the second period, and a little over four minutes later, Jory Homminga added a power-play goal on a putback after there was a scrum in front of the net to pull the Sault within 5-2.

“We didn’t quit, and we put pucks in,” Sault coach Rick Mackie said. “Every week we get better, I see us getting better in practice. It’s going to be a long, long, probably four-month process, but as long as we’re going forwards and not backwards I’m happy with that.”

Streichert then finished his first career varsity hat trick by poking in a shot right in front of the net at the 13:33 mark to give Esky a 6-2 lead heading to the third period.

“He played good today, he was fast,” Hughes said. “He’s one of our faster skaters and he was able to get by guys and put himself in the right spot at the right time for the first (goal) and the second one. That’s very promising, and it’s great for him to achieve that today.”

Esky’s Kyle Krutina scored the final goal of the game in a 4-on-4 situation with just under two minutes left in the contest.

Each team committed 10 penalties and struggled on the power play. Esky was 2-for-5, while the Blue Devils were just 1-for-6.

“We changed our mindset a little bit in the second period and I think it showed,” Hughes said. “Guys got frustrated at times and we took quite a few penalties in the second period, and then that carried over into the third, but we were able to come away with a win.”

Mackie made a change in the net after Esky’s first five goals, replacing senior Caleb Horn with freshman Triston Forgrave. Forgrave made 16 saves in 18 shots faced the rest of the way. Sophomore goaltender Bryce Buchbinder made 15 saves for the Eskymos.

“We needed a couple saves right from the start and we didn’t get that, so I thought the goalie change was needed,” Mackie said.

“I thought after that we kind of picked it up and started playing a little tighter defensively and we started getting some chances in their end, so I thought overall we did a good job.”

Esky visits Negaunee tonight at 7 p.m. The Sault takes on Chelsea in the Division 3 challenge Friday in Gaylord.