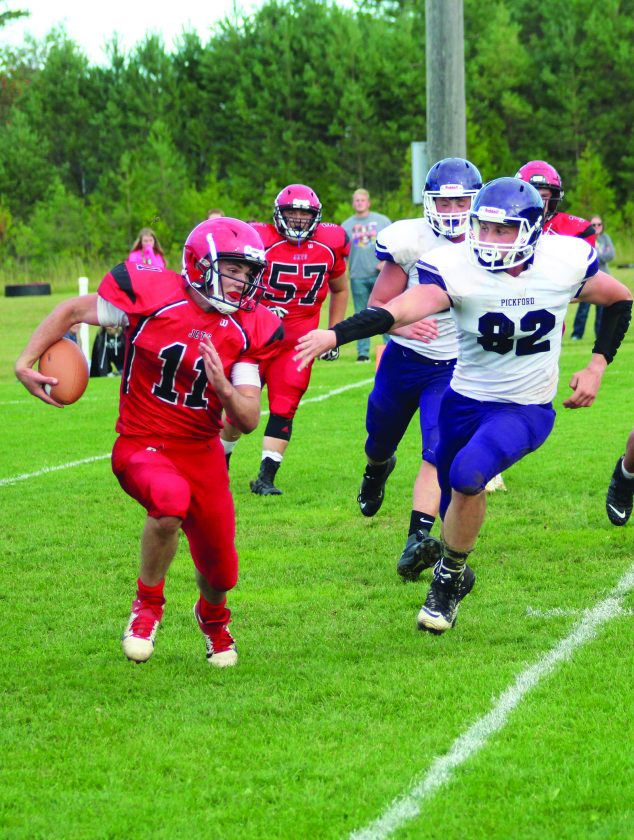 Matt “Sweets” McCarthy | Iron Mountain Daily News North Central’s Luke Gorzinski (11) busts a run to the outside while being chased by Pickford’s Luke Batho (82) during a Sept. 14 game at Powers. The top-ranked Jets and the third-ranked Panthers will square off in an eight-player Division 2 regional final Saturday at 3:30 p.m. EST.

POWERS — Arguably the top two eight-player football teams in the state are set to collide in a Division 2 regional final when top-ranked North Central and third-ranked Pickford line up across from each other for the second time this season Saturday at 3:30 p.m. EST in Powers.

The unbeaten Jets handed the 9-1 Panthers their only loss of the season Sept. 14 at North Central. The Jets won that game 20-14, largely because they forced seven turnovers and picked off five passes by Pickford star quarterback Jimmy Storey.

“We definitely don’t want to turn the ball over seven times again,” Panthers’ coach Josh Rader said jokingly in a phone interview Wednesday. “To win against a good team like North Central, we’re going to have to possess the ball. You give a team with the talent they have extra possessions and it’s a recipe for disaster. We’re going to make sure we manage the football the best that we can.”

This rematch will feature it all. A strong case can be made these are the top two eight-player teams in the entire state — not just in Division 2. Pickford was a state runner-up in D-1 last season before losing enough enrollment to drop down to D-2. North Central’s football history speaks for itself — the Jets won back-to-back state titles in 2015 and 2016 and have been in the playoffs every year since.

“It’s going to be a lot of fun. We’ve got two great teams going at it — arguably the two best teams in the state,” Rader said. “There’s going to be a lot of excitement with the game being played on a cold Saturday in November — it’s just typical U.P. football weather. The intensity is going to be high. I think it’s probably going to come all the way down to the last two plays.”

This contest will also feature great individual players. Six players on the All-U.P. Dream Team play for North Central or Pickford, with three on each. The most notable ones are Storey and North Central quarterback Noah Gorzinski.

“Everything revolves around No. 18 (Storey),” Jets’ coach Leo Gorzinski said. “He’s a great player and such a strong kid. He plays both ways, so we try to use that a little bit against him and make him chase, but it comes down to getting them stopped on the early downs and forcing them to make decisions they’re not comfortable with. When they get the momentum going, they keep pounding… But that was the game plan the first time — stop them on the early downs and force them into the situations where we don’t have to guess if they’re throwing, but where they’re forced to throw.”

“Defensively, it seems like we have to stop a million Gorzinski’s because they’re everywhere,” Rader joked. “We have to keep them from getting out in the open field, because when they’re in the open field they have great speed. They do a great job manipulating defenses to put their players in the open field so they can make plays. We want to minimize that and give ourselves opportunities to make plays. They have a lot of team speed, so it’s going to be real difficult.”

The Jets advanced to the regional final by snapping a two-year playoff skid with a 46-28 win over Crystal Falls (Forest Park), while the Panthers routed Engadine 57-12.

“(They’re) a lot like the last team we played,” coach Gorzinski said. “They’re an extremely talented, strong and experienced football team. They like to come at you downhill and they’re successul at that. They’re well-coached and they have one of the premier players in the state. You have to maintain your gaps and stop the run on early downs.”

The winner will host the winner of Cedarville and Hillman next week in the state semifinals.