Close and not so close 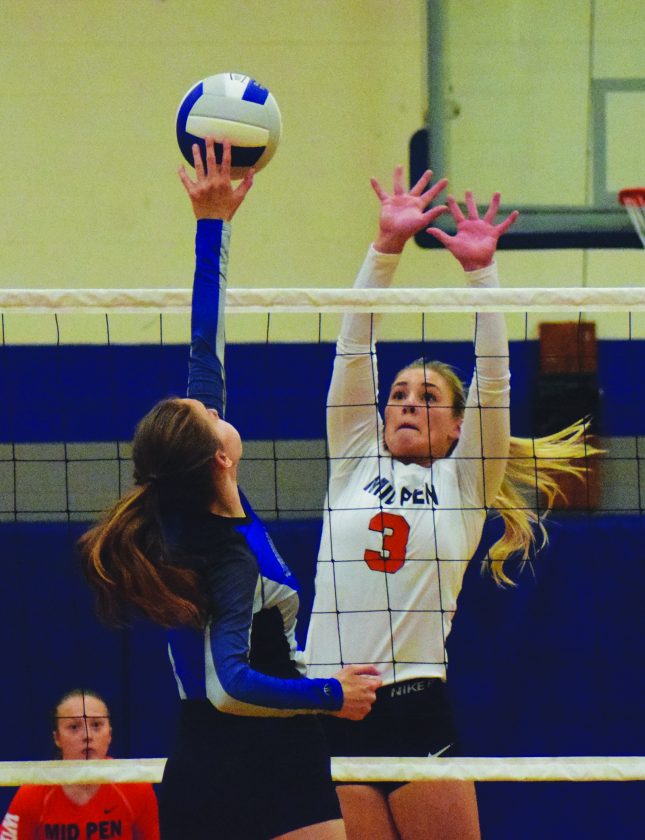 Sophomore Addie Christoff delivered the match-clinching kill for the Rockets, who face Mid Pen in tonight’s championship match at 7.

“Addie really stepped up tonight,” said Rockets’ coach Kristy Kerstner. “In the fifth set, the girls really started hitting. They kept talking and kept up their energy. They didn’t give up, which is the most important thing. The girls had to fight for it, but they got the job done.”

The finale was tied at nine before the Rockets took advantage of a few errors, including a serve receive miscue for a 13-9 lead. The teams then exchanged hitting errors, setting the stage for Christoff’s winning kill. 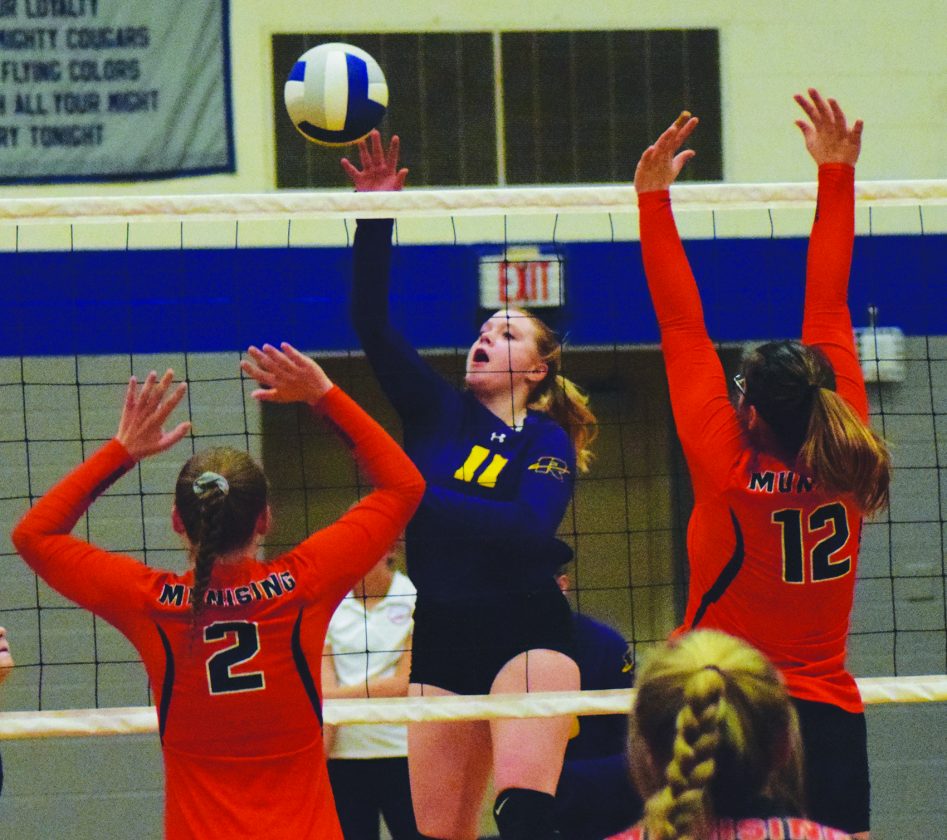 Justin St. Ours | Daily Press Rapid River’s Kristin Goodacre (11) tips the ball over the net against Munising’s Audree Hines (2) and Ainsley Bonevelle (12) Wednesday during a district semifinal at Superior Central.

“This is a tough one to end the season, that’s for sure,” said Munising coach Josh Cole, a Gladstone graduate.

“We definitely felt we had the momentum after the fourth set, but key mental errors hurt us. We played Rapid River twice this year. Hats off to them tonight. They made a lot of hustle plays and helped themselves stay in the match. They got better each time we played them. Kristy does a good job over there. Both teams played hard.”

Rapid River led 24-21 in the fourth. The Mustangs then scored the next four points, taking a 25-24 lead on a service ace by senior Taylin Behning.

A kill by senior Kristin Goodacre pulled the Rockets even at 25 moments before the Mustangs secured that set on a two-hit violation.

Rapid River overcame an 8-2 deficit to take the third set and trailed by as much as 11-5 in the fourth.

“We put Emily (Goodacre) in as setter and it opened the court for us,” said Kerstner. “Addie, who was our setter before, did a great job passing tonight and C.C. (Pilon) really came alive in the last four matches. In the beginning of the season, we struggled. Then, we finally came together at the end of the season.”

In the nightcap, Mid Pen senior Elli Paulsen opened the second set with a six-point run and Camyrn Croasdell provided the Wolverines with a 13-point run, enabling them to gain a 20-2 advantage.

Superior Central led 9-3 in the third before senior Kennedy Englund’s kill through a double-block began to stem the tide for the Wolverines.

The Cougars took their last lead at 13-12 on a service error by the Wolverines.

That set was then tied four times before an ace by Croasdell sent the Wolverines ahead to stay at 20-19.

“In the third set, we were a little flat in the beginning,” said Mid Pen coach Emily Kayser. “As long as we don’t stop communicating, we’ll be fine. We had a lot of strong net play. When Kennedy is on, she’s hard to stop.”

Englund finished with 13 kills and a block. Karley Prater added five kills and Chevy Koski had four kills and one block.

“Their hitting was so good tonight,” said Cougars’ coach Kris Bray. “Their offense was on. Mid Pen’s a good team, we just couldn’t match up with them. I thought our seniors did well. Our girls did the best they could, it just wasn’t enough.”

“Daisy is our little floor general,” said Kayser. “She sets up hitters real well for us.”