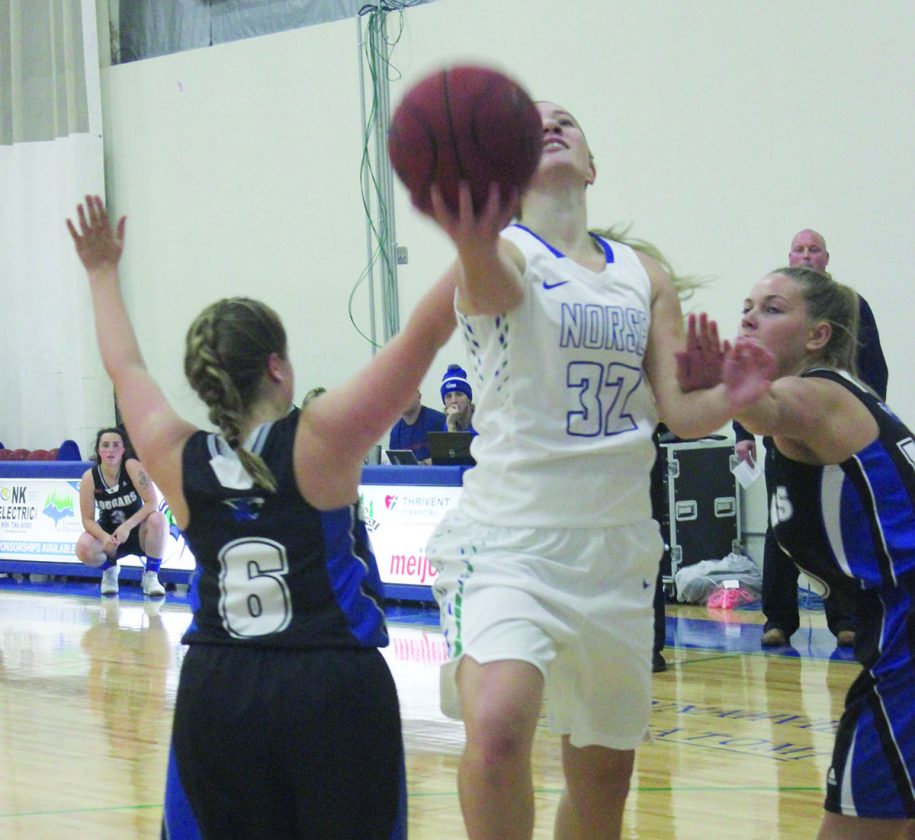 Dennis Grall photo Bay College’s Haley Trudell (32) drives for a layup between two Sault, Ont. defenders in an exhibition game in 2018. Trudell will be one of many returning players that will be relied upon heavily for the Norse this season. Bay hosts Northern Michigan University in an exhibition game Sunday at 2 p.m.

ESCANABA — The Bay College Norse women’s basketball team get its first opportunity to get on the court Sunday when it hosts Division 2 Northern Michigan University at 2 p.m. in an exhibition game.

The Norse, fresh off a 21-8 season and a trip to the NJCAA Region 13 final in coach Rob Robinson’s first year, will return lots of experience this season despite losing 1,000-point scorer Jordan Kraemer, who is continuing her career at Grand View University in Des Moines, Iowa.

Bay picked up eight new freshmen for the upcoming season, and Robinson is pleased with what he’s saw so far in practice.

“They all work hard and get after it in practice. We had a collision (Tuesday) where Taylor Hunter got a concussion, so I’ll be surprised if she’s be able to play this weekend. We have a group that’s got along and gelled early. I haven’t had to coach effort, which is a coach’s dream.”

Robinson is excited for the opportunity for his team to face a quality opponent like NMU right off the bat.

“We have the opportunity for our players to play against a D-2 school,” he said. “Most girls in this area grew up wanting the chance to play for or against Northern Michigan. I think this gives them the opportunity to play here at Bay.”

“I’d like our new players to realize how fast and physical high-level basketball is,” he said. “It’s such a different game between high school and college. The physicality and speed are two things this game should help them get used to.”

The Norse didn’t have any scrimmages last season, so Robinson knows this will be a great learning experience. He also pointed out a few things he’ll be watching for.

“We didn’t have any scrimmages last year, so we were kind of going in blind to that first game,” he said. “It’s going to be a great learning experience for them.”

“The way we run our offense is we have five out with a lot of posting options out of it. I’ll be looking for team cohesiveness and who’s on the floor with combinations that work. A lot of these girls haven’t had to press or play man-to-man defense in their careers, so I want them to get an understanding for how that works.”

Despite it not being a regular season game, Sunday’s matchup will operate like a full 40-minute game with a clock that stops on every dead ball.

“The difference between a scrimmage and exhibition is it’s a full 40-minute game, not your typical scrimmage where you just let the clock run,” Robinson said. “It’s a real game, it just doesn’t go against our records. We’re going to have officials that have done D-2 games and it’s going to be a full-fledged game.”