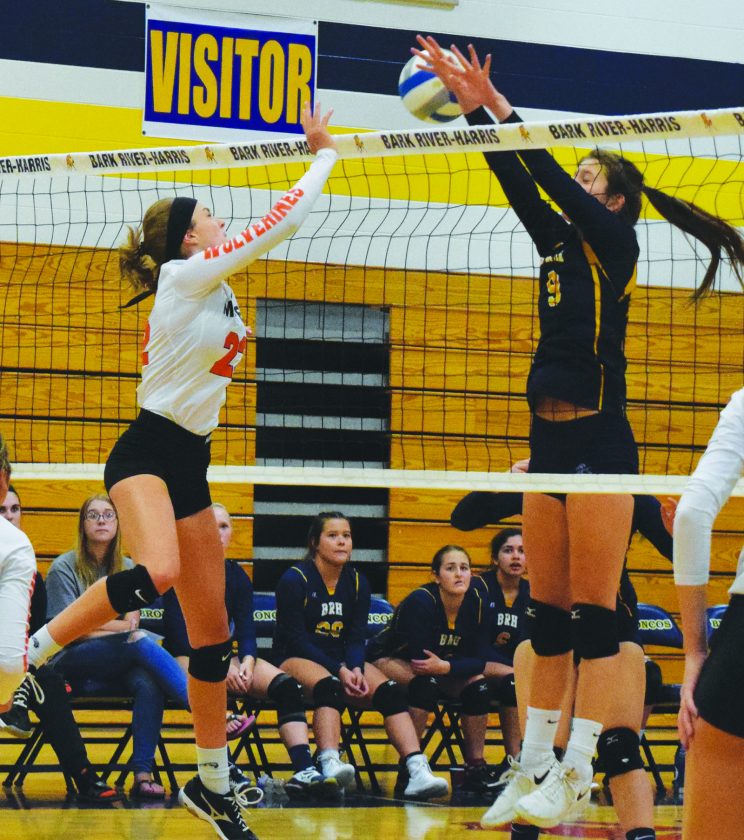 HARRIS — The Mid Peninsula volleyball team came back with a vengeance after a five-set loss to Carney-Nadeau last Thursday as it overpowered the Bark River-Harris Broncos 3-0 (25-19, 25-15, 25-21) in Skyline Central Conference action.

In the first set, the Broncos took an early lead, and it wasn’t until Mid Peninsula’s Daisy Englund went on an eight-point service run that the Wolverines led 12-7. They stayed ahead the remainder of the set, with Kennedy Englund finishing it with an ace.

“We knew tonight Kassidy Roll was going to be out tonight — one of our big middles — and we had to adjust for that,” Broncos’ coach Jen Ives said.

“I think we had four sophomores starting tonight. At practice, we talked a lot about things we need to work on, and they came out and executed every single one of those tonight. They executed well.”

The second set resulted in a battle in the middle as the teams traded possession back-and-forth over 11 points without either getting the upper hand.

“Our defense (stood out),” Wolverines’ coach Emily Kayser said. “It’s been one of our main concerns right now, just focusing on defense and keeping as many balls alive as possible, and we did a lot of that tonight.

“This late in the season we are meshing very well together. They’re playing awesome, we have great team chemistry and everyone’s just playing their role how they’re supposed to be right now.”

A kill from Kennedy Englund broke the stalemate, however, and gave the Wolverines a 13-12 lead. After Mid Pen (7-2, 5-1 SCC) tacked on a few more points, the Broncos (6-3) weren’t able to come closer than within two, and a shot from Mid Pen’s Chevy Koski finished the set thanks to a Broncos’ miscue.

“We played a hard five sets with Carney last week, and today our main goal was to have a lot of strong net-play — that’s what we did a lot with,” Kayser said.

“We had a lot of strong blocks from Chevy Koski and Kennedy Englund today.”

Bark River seemed to find its feet late in the third set as it came within two on three separate occasions, thanks in part to an ace from Allison Richer and a kill from Cara Zawacki. Ultimately, BR-H reduced its deficit to 22-21, but two balls into the net put Kennedy Englund in a position to finish it with a kill.

“(Tonight), they did fantastic,” Ives said. “This is a loss for us, but we played at a new level we hadn’t before. I think it’s only going to go up for us from here.

“Mid Pen didn’t miss many serves, and they played a high level of volleyball. There wasn’t a whole lot more we could’ve done tonight.”