Jets come up short in 3-0 loss to Norway 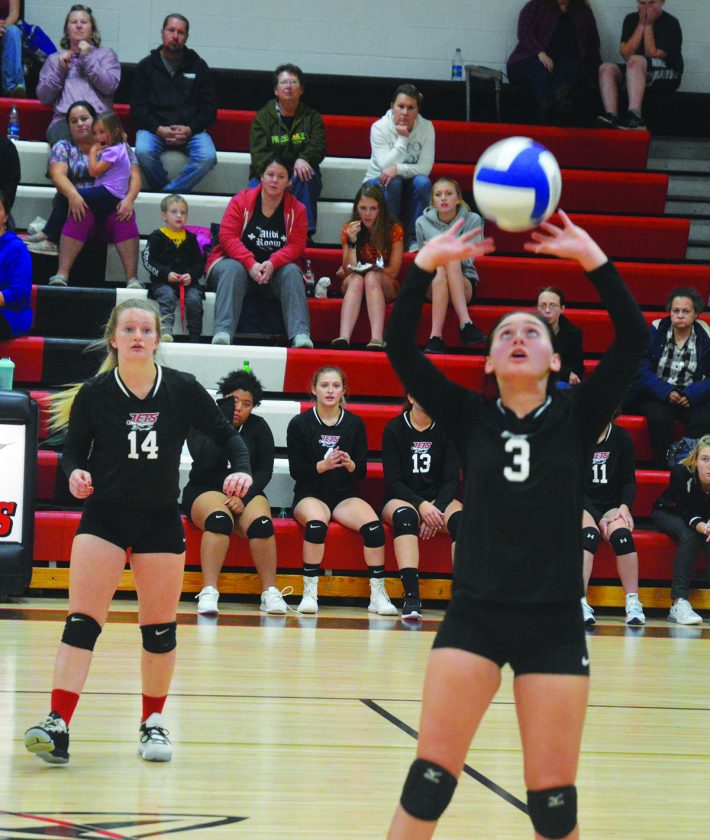 POWERS — The North Central Jets are showing improvement, but it still wasn’t enough in a 3-0 (25-21, 25-15, 25-22) volleyball loss to Norway in a Skyline Central Conference matchup here Monday.

The Jets (0-8), still looking for their first win, built a 16-14 lead in the first set on a three-point service run by Alex Neville. After the teams traded points back and forth, a kill by Neville tied the score at 20. However, Norway scored four of the final five points and finished the set on a kill by Cadeance Lindsley.

“Our girls talked a lot more tonight,” Knights’ coach Erika Harnden said. “I feel like that was a big bonus for them. They just kept plucking away at it.”

The second set was tied at 12 when Norway’s McKenna Neuens went on a five-point run that she finished with back-to-back aces to make it 17-12. The Knights, who picked up their second win, finished the set on a kill by Mackenzie Clifford.

They rode that momentum into the third set, building a 7-0 lead on the back of a six-point run by Cassidy Menard, forcing Jets’ coach Rick Mick to call timeout.

Out of the timeout, the Jets started chipping away and cut their deficit to 14-12 on a three-point run by Neville. After the Knights extended their lead to 18-14, the Jets fought back behind a five-point run from Cheyenne Borucki to go up 19-18.

“The girls are getting smart,” Mick said.

“Obviously communication is a big thing, but every day we work on who’s supposed to get that ball. When the ball’s going to a certain spot, who’s supposed to get that ball? And they’re getting it, they’re getting smarter. They’re recognizing when girls are tipping, when they’re hitting, and they’re putting themselves in the right spots. You can see them evolving into better and better volleyball players, which is making us into a better and better volleyball team.”

Each team traded points a couple times before the Jets gained possession, trailing 23-22. However, a service error and a hit out-of-bounds on back-to-back plays ended the set and the match in favor of Norway.

“The girls needed (the win),” Harnden said. “It’s a big boost for them, and I’m very proud of how they played tonight.”