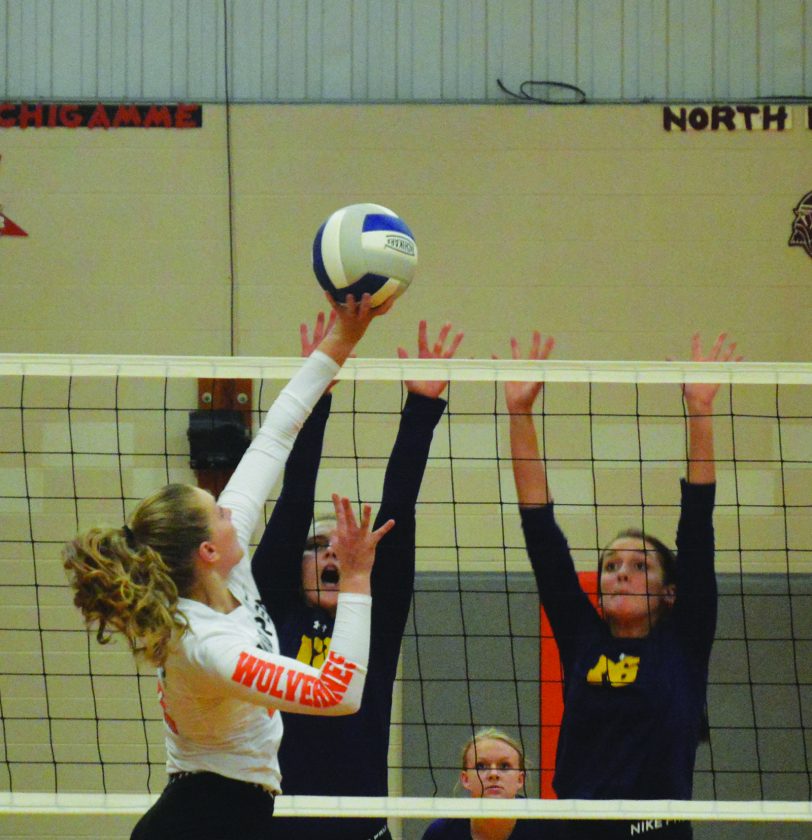 Karley Prater got the Wolverines (3-1) off to a hot start, going on a nine-point service run to give Mid Pen a 13-4 lead in the first set. However, the Rockets fought back and pulled within 20-18 after a seven-point service run by Addie Christoff. Mid Pen coach Emily Kayser called a timeout to rally the troops and the Wolverines responded to take the set 25-21.

“Icing the server … I do believe in it,” Kayser said. “It’s kind of a mental thing.”

Strong serving on both sides continued in the second set as Rapid River’s Emily Goodacre went on a five-point run to give the Rockets a 16-11 cushion.

Shortly after, Mid Pen’s Daisy Englund went on a seven-point run as the Wolverines regained a 22-17 lead and finished off the set 25-19.

“Our serving was a big factor for us tonight,” Kayser said. “We had a few miscommunications in that second set … it wasn’t the prettiest but we came through. The biggest thing for us is we have to stay calm and not get down and just pull it back in.”

The Rockets (0-2) took a 5-1 lead early in the final frame before Mid Pen’s Camryn Croasdell joined the party, going on a seven-point run to give the Wolverines a 9-5 lead. The Rockets pulled within 11-9 at one point, but that’s as close as they would get. Mid Pen’s Kennedy Englund finished the set and the match with an ace.

“Kennedy Englund was a big factor at the net tonight for us,” Kayser said. “Daisy is our setter and we’ve been working really hard with her. They play together great and they get along great.”

Kayser was also happy with her team’s serve receive, citing it did much better than in a 3-0 loss at Carney-Nadeau Sept. 5.

“We did 100 times better on our serve receive than we did against Carney,” she said. “We still had some serve receive errors tonight, but they were very minimal.”

Kerstner felt the Rockets showed a lot of improvement since their season-opening loss to North Dickinson.

“We were very competitive. I was to happy see that even if we were down, we always fought really hard and got right back in the game. Mid Pen had some really strong servers and they move on their side of the court very well,” she said. “From the first game to this game we saw a lot of improvements. I’m really happy with how they showed up today.”

Kristin Goodacre led the Rockets with four digs and one block while Gabby Moss added two blocks and Cecilia Pilon chipped in with two digs.

The Wolverines, who also won the jayvee match 2-0, visit Munising Monday. The Rockets will play in Saturday’s Rock Invitational in Gladstone.