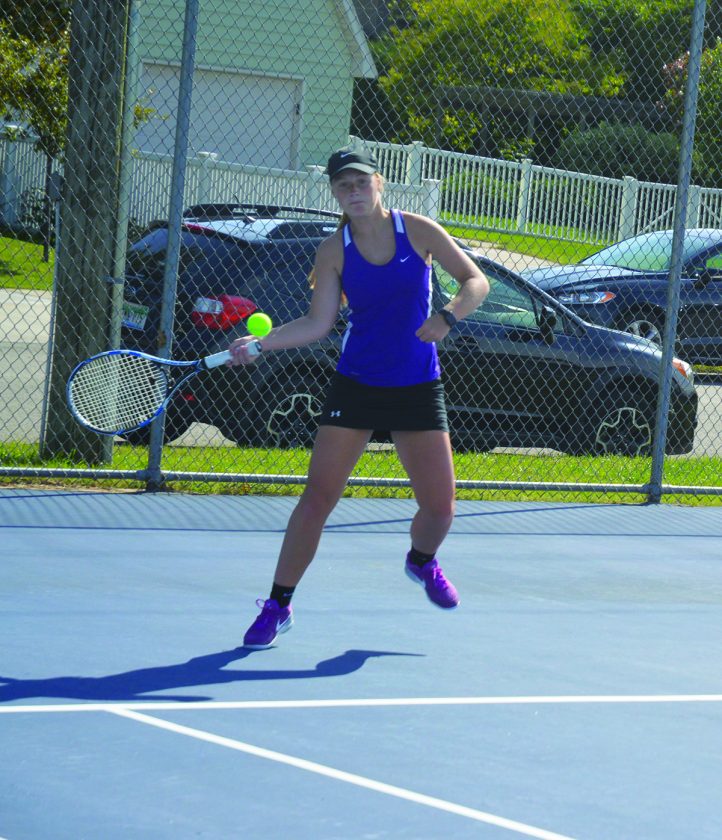 Austin Hemmingson | Daily Press Gladstone’s Alaina Trudeau returns a shot during a No. 2 singles match against Escanaba Monday at Gladstone.

GLADSTONE — For the second time in two weeks, the Escanaba and Gladstone girls’ tennis teams played each other about as evenly as you possibly can here Monday. Each side took two matches in singles and doubles to end in a 4-4 tie.

The lone three-set match of the day came at No. 3 singles, where Gladstone’s Kate Matthews persevered through a 6-4 loss in the first set to Escanaba’s Ukiah Penegor before coming back to win the second set 6-4 and the third set 6-3 to win the match.

“I was very impressed with Kate Matthew’s play today at No. 3 singles,” Braves’ coach Ryan Barron said. “She fell behind 4-6 in the first set and she clawed her way back and won the next two sets 6-4, 6-3. Her perseverance and positive attitude drove her to the win. Having that positive mindset is huge in tennis — being mentally tough is half the battle.”

Gladstone’s Andie Balenger survived a tough match against Escanaba’s Jasmine Clark with a 6-4, 6-4 win at No. 1 singles.

“I think I played pretty well,” Balenger said. “She was playing pretty well too, so I needed to have a good (match).”

Balenger, who’s lost just one match all year (at Marquette), was adjusting to new strings on her racquet after the old ones broke during a match at Gwinn Wednesday.

“It didn’t affect me as much today as it did in Gwinn when it actually snapped,” she said. “It went pretty good … I’m not too worried about it.”

“Jasmine Clark played very well against one of the best players in the U.P. and showed that she can play with anyone,” he said.

“I work really hard,” she said. “I’m here every day working with my dad, my mom and my brother. They all come here and help me out. Putting the work in helps me get good results.”

Esky won the other two singles matches, with Jacey Moreau defeating Gladstone’s Alaina Trudeau 6-4, 6-1 at No. 2 and Amber Yang knocking off Gladstone’s Lilly Griebel 6-3, 6-0 at No. 4.

The last time the two teams got together in Escanaba Aug. 26, the Eskymos won all but one doubles match. Gladstone’s Emma Delaire and Emily Marenger were determined to change that this time around, taking down Esky’s Anna Branstrom and Laura Sliva 6-4, 6-3 at No. 2.

“No. 2 doubles got revenge the second time around,” Barron said.

“They played like I know they can. Their confidence was there today. They weren’t forcing shots, they were hitting the ball consistent and they communicated well. If they can do that from this point on, there’s not much more I could ask for.”

Esky’s tandem of Maddy Ide and Alison Sommers continued their excellent play with a 6-3, 6-3 win over Gladstone’s Marnnea LaFave and Olivia Saari at No. 1.

“No. 1 doubles started a little tight today, but they settled in and played some of their better tennis of the year,” Ogren said.

Esky’s Maddy Mishica and Gracie Wickham wore down Gladstone’s Alesha Marenger and Sara Eilola 6-2, 6-4 at No. 3, but Gladstone’s Taelor Zeise and Emma Wagner made quick work of Esky’s Rylee Kuehl and Ashley Sylvester 6-1, 6-3 at No. 4.

“No. 4 doubles had another superb outing,” Barron said. “Emma and Taelor are excellent communicators and help build each other up. Even after a lost point they are there supporting one another. They work well together and are always trying to improve individually, and in turn, help the team.”

Esky returns to action at Kingsford today at 4 p.m. EDT while Gladstone hosts Kingsford Wednesday at 4:30.