Down to the very end 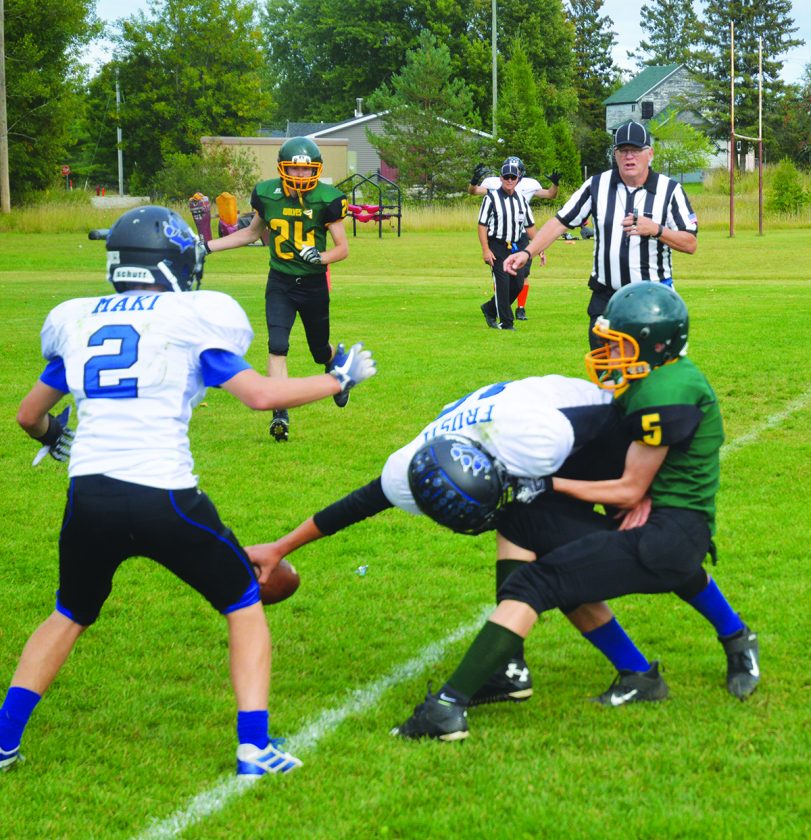 Austin Hemmingson | Daily Press Superior Central quarterback Kyle Frusti reaches the ball across the goal line for the game-tying touchdown as time expires while Carney-Nadeau’s Peyton Imhoff tries to stop him Saturday at Powers. Frusti broke two tackles on his way to a 20-yard TD run on the last play of the game to tie it at 42, then found Jack Rondeau on the two-point conversion to give the Cougars a 44-42 win. Looking on for the Cougars is Parker Maki (2) and looking on for the Wolves is Jacob Blahnik (24).

POWERS — They didn’t lead until it mattered most: when it was over.

Quarterback Kyle Frusti made an incredible play you’ll only see once in a great while, rushing for a 20-yard touchdown on fourth down as time expired to tie the game, then found Jack Rondeau on a three-yard pass for the two-point conversion to give the Superior Central Cougars a thrilling 44-42 come-from-behind win over the Carney-Nadeau Wolves here Saturday in a Great Lakes Conference crossover contest.

“That was unexpected,” Cougars’ coach Sam Eggleston admitted when asked about Frusti’s run. “When he took off, both the assistant coach and I — who happens to be his dad — both of us just said, ‘Crap, he doesn’t have the wheels for this.’ But apparently he has the arm length.

“My mind just started to kind of flutter, I really didn’t think he was going to get in. As he crossed the line, my heart just kind of ceased up for a second and my brain started thinking what can we do to catch them off guard (on the two-point conversion), and we did.”

The entire final drive was a roller coaster ride for both teams. After Carney’s Brett LaFord broke free for a 57-yard TD run to give the Wolves a 42-36 lead with 3:34 left to play, some controversy arose on the ensuing kickoff. Carney attempted an inside kick, and LaFord dove to recover it along the right sideline at midfield. However, after some discussion, the officials ruled LaFord touched the ball before it went 10 yards, giving the Cougars (2-0) possession at the Wolves’ 49-yard line.

The Cougars, who scored on every possession in the second half after trailing 30-14 at the break, had to convert on 4th-and-6 on their first set of downs to begin the drive to put the ball at the C-N 39. A few players later, Frusti scrambled around to buy some time and eventually found Zach Englund deep down the field on a 33-yard connection to put the ball on the one-yard line with 44 ticks left.

C-N stood tall on the next three plays, starting with LaFord tackling Englund for a six-yard loss. On second down, the Wolves (1-1) sacked Frusti back at the 20. The Cougars scrambled to the line and Frusti sailed a pass over Parker Maki in the end zone, setting up 4th-and-goal from the 20 with just five ticks left. Frusti took the snap and looked downfield, but when he didn’t see anyone open he decided to take off.

“There was an open hole to my left and I was (counting) in my head,” Frusti explained. “When I got to four, I just decided if we’re going to make anything out of this, I’m just going to have to do it with my feet. So, I tucked it and I just ran.”

Frusti took off toward the left sideline, outrunning a couple Wolves to get to the five-yard line, where he somehow managed to spin out of a tackle by LaFord and fight his way through a tackle attempt by Peyton Imhoff to stretch the ball across the goal line.

“I don’t entirely know (how I did that), I’ll have to see it on film,” Frusti said with a smile. “I saw two defenders there and then they made me contact with me, and I just stretched and fell waist out over the line. It felt amazing.”

Not so much for the Wolves.

“I think all eight of our players had a chance to get him down and we just couldn’t do it.

It was the cherry on top for Frusti, who finished 21-for-37 for 340 yards and four touchdowns through the air. He also ran 13 times for 38 yards and two scores, accounting for all of the Cougars’ touchdowns. Englund also had a huge day, making seven receptions for 195 yards and three TDs while adding four carries for 18 yards. Rondeau added five catches for 54 yards and a score while also recording an interception and making a couple key two-point conversion catches. Zach Bukowski also added an interception.

Despite tying the game at 36 on a 27-yard pass from Frusti to Englund with 6:15 left, the Cougars never led until the untimed two-point try with no time remaining. They trailed 14-0 right out of the gate after Carney’s Max Baumler hooked up with Jacob Blahnik on a 34-yard pass with 9:24 left in the opening frame.

“That’s not a position we want to be in, but it feels great to know these boys are willing to fight every step of the way no matter what injuries we’ve got,” Eggleston said. “This is a pretty new team for us — we lost a lot of kids from last year — so to see them come together like this was just outstanding. The way they kept pushing really gives us a lot of hope in the games coming up.”

The Cougars’ comeback spoiled an inspiring performance by LaFord, who took the opening kickoff back 78 yards for a touchdown. He finished with 188 yards on the ground on 22 carries, one reception for 42 yards and four total TDs. After cramping up on a one-yard TD run with 8:05 left, he missed just two plays before returning and toughing it out the rest of the way.

“He played amazing. That was a Roubens Fink-esque performance,” Frusti said. “He only missed two plays and continued to come out and fight for his team, so props to him.”

Baumler finished 3-for-13 for 87 yards, two TDs and two interceptions while also running 11 times for 52 yards. Blahnik had a 34-yard TD catch and Jerry Lee LaFord had an 11-yard TD reception.

Belec remained positive after the loss, happy his team is much more competitive this season after it finished 0-9 last year.

“(The message to the team) is just come back on Monday and we’re going to see what you’re made of. We’ll see if we’re going to come back and fight like we should or if we’re just going to lay down and let the rest of the season play out.”