Broncos ‘flip the script’ in five-set win over Munising 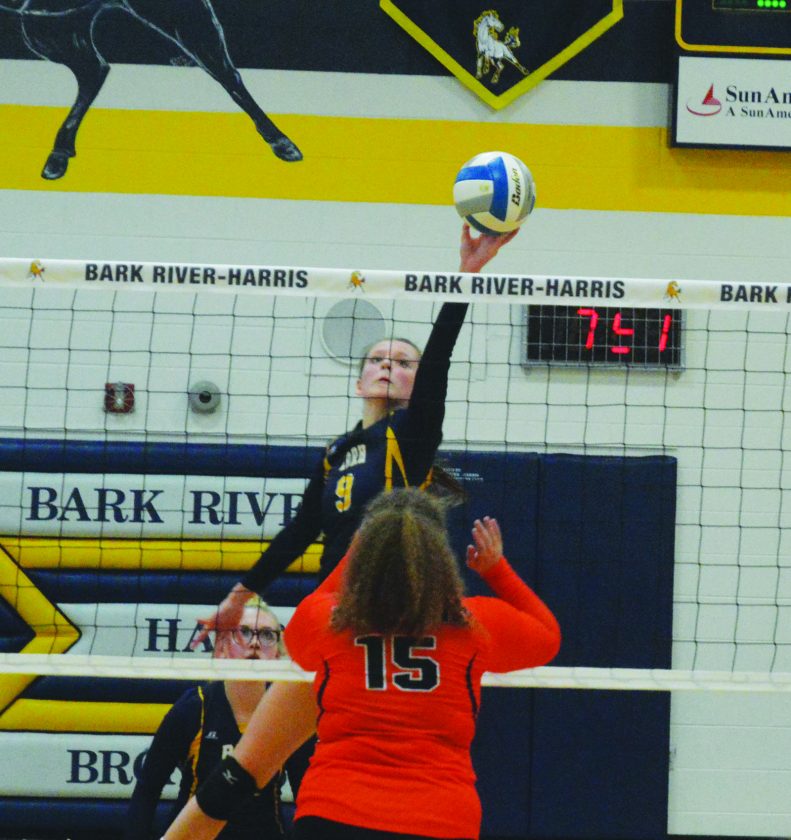 Austin Hemmingson | Daily Press Bark River-Harris’ Makena Lockwood (9) tips the ball over the net in front of Munising’s Sophia Rolfe (15) during Tuesday’s match at BR-H. Lockwood finished with 18 digs, 16 serve receives and 14 kills to lead BR-H to a 3-2 win.

That was the pregame message to the Bark River-Harris volleyball players from assistant coach Jason Lockwood before their match against Munising here Tuesday. Tired of losing to the Mustangs, the Broncos showed incredible fight and toughness to pull out a 3-2 (20-25, 25-9, 25-9, 19-25, 15-7) win in the Skyline Central Conference match.

Led by Makena Lockwood, the Broncos (2-0, 1-0 SCC) recovered from losing the first set to dominate the next two, each by a 25-9 score. After Munising responded in the fourth set, the Broncos erased a 3-0 deficit to to score 15 of the final 19 points in the final frame to take the match.

“We have a really young team. We only have two seniors, six juniors and three sophomores. But we haven’t beat Munising in a really long time, so that was kind of their motivating factor,” first-year BR-H coach Jen Ives said. “As coach Jason said, ‘Flip the script. Make it read something different in the headlines tomorrow.’ That’s the way it’s been for the last seven years. We don’t want to see Bark River get trampled by Munising anymore, and that was kind of the girls’ motivating factor coming out. I think when it came down to game five, that was kind of in the back of their heads: ‘Let’s flip this around and try and win this one.'”

After dropping the opening set, the Broncos executed to perfection in the second behind an 100 percent serve rate.

“That’s huge,” Ives said. “It’s hard to lose a game when you don’t miss a serve. That’s something we’ve really been working on in practice is getting that serving down.

“I think that was really the deciding factor for us. We just didn’t miss a serve.”

The third set was much of the same, keyed by an eight-point service run by Lockwood that turned a 10-7 lead into an insurmountable 18-7 advantage.

“I was just focusing on serving to the same spot every time, just trying to keep hitting the same zone,” Lockwood said. “I think it was like zone 5. I just wanted to keep serving there, and consistency means a lot.”

After trailing 4-1 early in the fourth frame, Munising built a 21-14 leading before hanging on for a 25-19 win to force a final set.

“It was just a game of runs. We have a somewhat young team with little varsity experience, so we’re going to have the highs and we’re going to have the lows this year,” Mustangs’ coach Josh Cole said. “I can’t say enough about that fourth set. We didn’t seem like we could hit the ball out of bounds at all in that fourth set. I was really happy with how much we scrambled in the back row and I was pretty much happy with everything we did to force that game five.”

However, the Mustangs were unable to stop Lockwood when it mattered most. The BR-H senior took control with two powerful spikes to increase the Broncos’ lead to 11-7 late in the final frame.

“No. 9 (Lockwood) across the middle had one heck of a fifth set. We didn’t have an answer for her there,” Cole said. “She had a couple easy kills there and what can I say? Bark River finished it up.”

“I think timing is everything, just trying to keep your eye on the ball. You just have to time it up right,” Lockwood said about her performance. “We have a super young team and I’m really proud of them for playing a really high level of volleyball.”