UPGA leaderboard jammed at the top 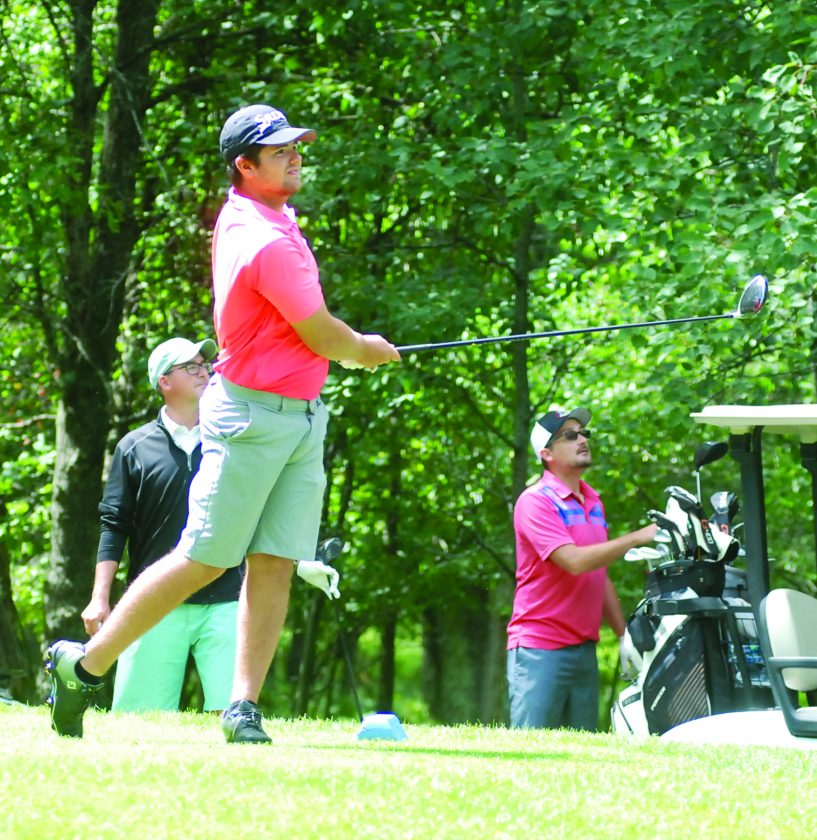 Austin Hemmingson | Daily Press Gladstone’s Bryce Douglas watches his drive on hole 18 during the second round of the men’s UPGA tournament at Terrace Bluff Golf and Country Club Thursday in Gladstone. Douglas shot a 1-under 71 to pull within a stroke of leaders Rudy Peterson and Brian Robinette. Looking on are Rick Rhoades (back left) and Chris Rhoades (back right), both of Marquette.

GLADSTONE — There’s not much room for error for the golfers at the top of the leaderboard after day two of the UPGA men’s championship at Terrace Bluff Golf and Country Club here Thursday.

Brian Robinette of Escanaba and Rudy Peterson of Gladstone share the lead at 3-under par after each shooting a 71 for a two-day total of 141.

“I played good in terms of my golf swing … it felt really good,” Robinette said. “I’ve always talked in the past about just getting that first round out of the way. I don’t care if you’ve played in one of these one or 1,000 times, you need that first day to just kind of settle your nerves.

“I felt like I had pretty good control of my swings. I missed a couple birdies that maybe I could have made, I had a sloppy double-bogey on 11. When you’re 47 years old you’re going to have those moments, so I kind of prepared for that. I told myself going into this week not to make a big deal out of mistakes and just rebound, so I was glad I was able to follow my own advice so to speak.”

Gladstone’s Bryce Douglas gained some traction, shooting 2-under to pull within a stroke of the leaders; and after being tied at the top after round one, Ishpeming’s Mark Clements shot 1-over to fall two strokes back.

“Well, the first tee shot I hit on No. 1 went right in the water,” Douglas said. “I was able to bounce back and make par. I shot 3-under on the front for a 33 and I thought there were quite a few more birdies out there, but I missed a few short ones. Then, I got to the back and hit pretty much every green in regulation, but I couldn’t make the putts and three-putted twice.

“I’m just happy to be in it and I think I’m in a pretty good spot.”

Gladstone’s Matt Argall shot an even-par 72 for the second straight day, putting him three strokes back.

“It was kind of like yesterday, I still haven’t figured out how to hit that draw yet,” he said. “I made the turn at 2-under, I three-putted on 11 but I got a birdie on 12 and then I just did some stupid stuff on 13 and 14. I made a couple birdies on the way in but I just played some bad golf. Overall, I’m satisfied.”

Norway’s Chad Tirschel and Escanaba’s Mark Gauthier each sit four strokes back. Tirschel played himself into a better spot with a 1-under performance Thursday after shooting 3-over Wednesday.

“I played well,” he said. “I made more putts than I did yesterday. My whole group was good — we all made a lot of pars together and we all played well. It’s fun playing when we’re all playing well. I think I putted better after knowing where to miss the shot. If you’re going to miss a shot, it’s good to know where to miss. It’s all about leaving yourself a straighter putt and missing on the right side of the hole if you can.

“It feels good. I’ve kind of done better than I thought I was going to do. I haven’t played a whole lot of golf this year, so I’m happy with it. I’m happy with the way I’ve been playing and hopefully I can keep it going.”

Iron Mountain’s Tom LaVigne sits five strokes back, followed by Ishpeming’s Carter Mason and Gladstone’s Joe Quinn at six strokes back. Iron Mountain’s Jim Markell and Marinette’s Jim Wagner will round out the championship flight, which tees off this morning at 8:30 EDT. The rest of the group has been divided into five separate flights.

Robinette knows the winner will be the one who makes the least mistakes.

“The fact that there’s six or seven players still in the mix shows the course is holding its own. I think people would be surprised 3-under par would be tied for the lead after two days, but the course doesn’t give up a lot when you play off the blue tees and you have to get everything in the hole. You’re not going be able to make a ton of mistakes, but I want the champion to be someone who doesn’t make a ton of mistakes and warrants being a champion.”

Douglas, who grew up playing at the Bluff, expressed confidence in his ability to contend.

“I can definitely feel a really low, probably 65 or 66 in me. I just got to keep going at the pace I was on on the front nine,” he said. “My goal is to win it, obviously. I’m only one stroke back with two rounds left. I know I’m for sure with Rudy Peterson and Brian Robinette in the last group. I’m not sure who else will be in that pairing, but I know those guys pretty well so it should be a fun day tomorrow.”