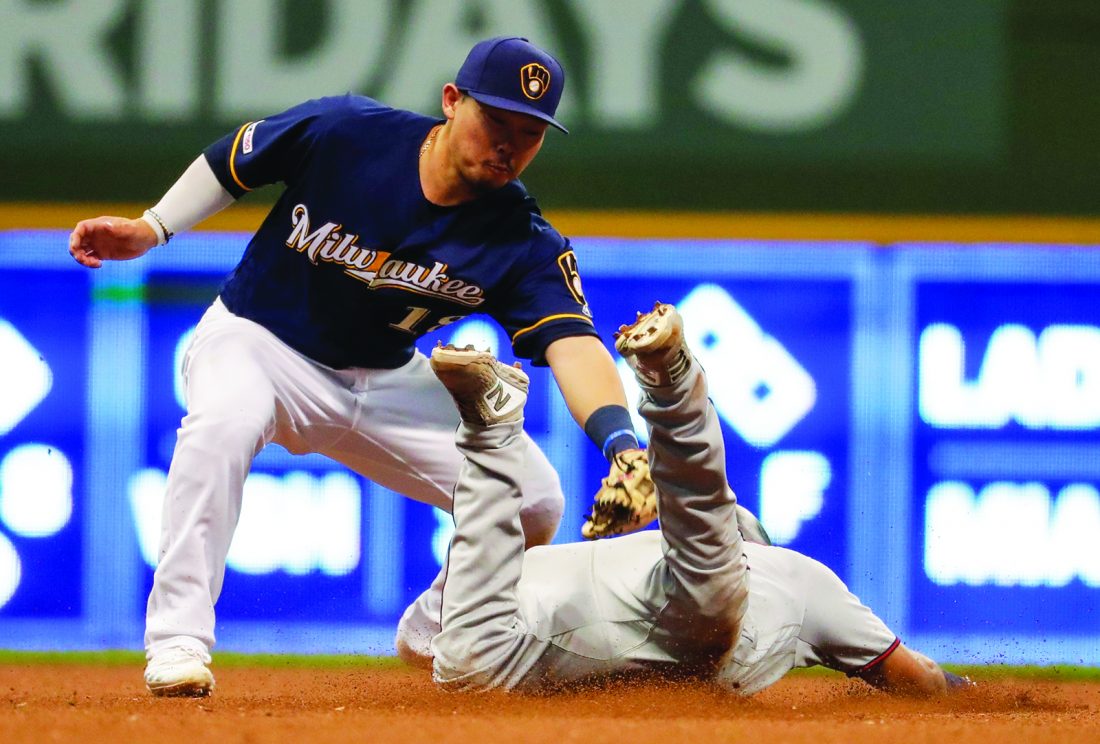 MILWAUKEE (AP) — As much as any two teams, the Minnesota Twins and the Milwaukee Brewers are playing in a playoff-like atmosphere, as the AL Central and the NL Central feature the tightest races in the majors for a division title.

Christian Yelich returned to the starting lineup and sparked a late rally, but it wasn’t enough for the Brewers as Marwin Gonzalez hit a three-run home run off of Josh Hader to propel the Twins to a come-from-behind 7-5 win.

“Amazing. We fight to the end no matter who we’re facing,” Gonzalez said.

It was the fifth blown save for Hader, an All-Star for the second consecutive year. He has allowed 13 home runs in 44 appearances, after giving up 13 total in 90 appearances during his first two seasons.

With Milwaukee trailing 4-1 in the seventh inning, Yelich hit an RBI double and scored on Yasmani Grandal’s three-run home run, his 20th of the season and his first since July 6. That gave the Brewers a 5-4 lead.

The pivotal eighth inning started with the Twins putting runners on first and second with no outs before Brewers reliever Drew Pomeranz (2-10) recorded the first out. He was replaced Matt Albers, who struck out the only batter he faced, C.J. Cron.

But then Gonzalez hit Hader’s first pitch, a 96 miles-per-hour fastball, over the wall for his 14th homer of the season.

The Twins had spent a total 126 days in first place, including 113 consecutive days, until Monday, when the Indians passed them. Only the Dodgers have spent more days leading their division this season (132 entering Tuesday). With the Indians’ loss Tuesday, the Twins are back in first, by a half-game over Cleveland.

The Brewers are in third, 2 1/2 games by the division-leading Cubs.

“They are draining games,” Twins manager Rocco Baldelli said of wins like Tuesday’s. “They’re not normal baseball games where someone gets a lead and they ride it out for seven innings and the game is over. We haven’t played many of those lately. But that’s OK. That prepares you and tests you a little bit and gets you ready for playing later on in the season.”

Yelich had missed five starts due to back stiffness, although he did pinch-hit Sunday, striking out. The reigning NL MVP went 3-for-4, grounding out in his first three trips to the plate.

Grandal’s homer also scored Ryan Braun, who reached first when Mitch Garver was called for catcher’s interference. All four runs in the Brewers rally were given up by reliever Ryne Harper, who didn’t record an out in facing four batters in the seventh.

Minnesota starter MartÌn PÈrez, who had given up a season-high seven runs in his previous start, managed to leave nine Brewers stranded on base during six innings and gave up only an unearned run. He had allowed 11 home runs in last five starts, but gave up no homers Tuesday.