A rally after a 4-stroke deficit earns him the title 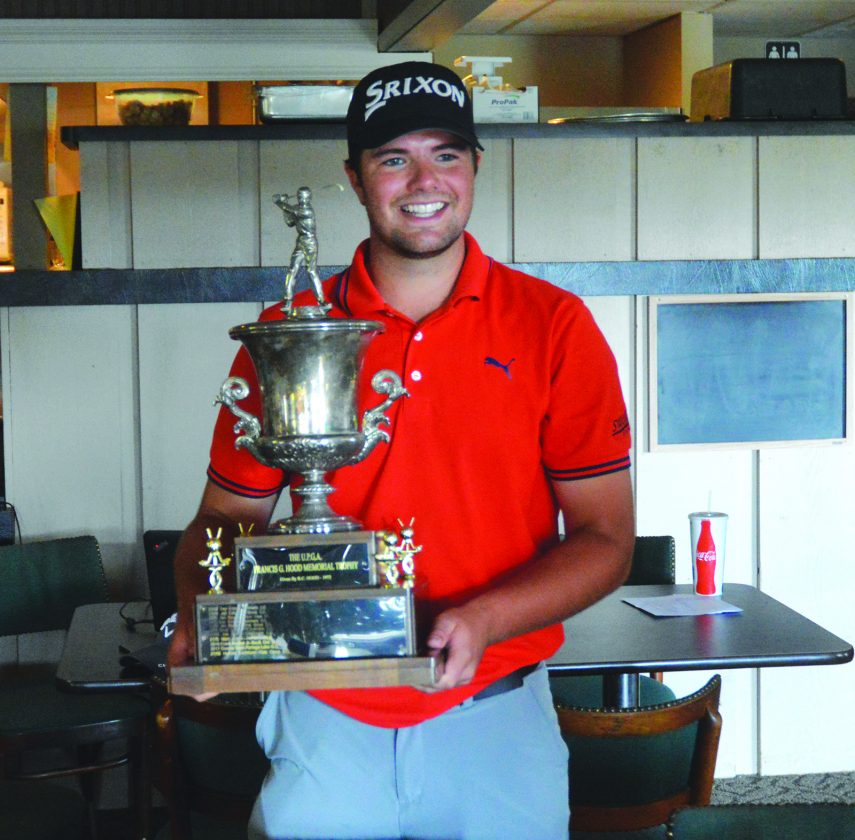 Justin St. Ours | Daily Press Bryce Douglas of Gladstone Golf Club poses with the trophy for winning the 2019 men’s UPGA Championship Saturday at Terrace Bluff Golf and Country Club in Gladstone Saturday. Douglas finished with a 284, one stroke ahead of Mark Clements of Wawonowin.

Douglas, who sank at least three birdie putts in the final six holes, finished the four-day tournament with a 4-under-par 284 strokes, one better than Mark Clements of Ishpeming (Wawonowin).

They were followed by Brian Robinette of Escanaba (286) and Rudy Peterson (287) and Matt Argall (289), both of Terrace Bluff.

Douglas was four strokes behind Clement after 11 holes prior to mounting his comeback.

“I got my first birdie on the 12th hole, then I made just about everything after that,” he said. “I started making birdies and chipped away at the lead. I just told myself I could do it.”

Douglas fired a 2-under-par 70 on the final day and made up most of his deficit on No. 15 which he birdied and Clements double-bogeyed.

“Bryce made some nice shots and I helped him a little,” said Clements, who also hit 72 on Day 4 and was runner-up for the second straight time. “Everybody birdied on 12 except me. I had a little bit of a lead and hit some good shots on 13 and 14, then I three-putted on 15. That was a big mistake right there. The Bluff treated us real good. They made it enjoyable for everybody. I’m a little disappointed I didn’t win it, but it was fun and that’s why we play. We enjoy playing with each other. It’s fun to compete with the younger guys.”

The short game on the front nine was challenging for the final foursome on this sunny and warm day.

“Nobody could get a putt to drop on the front nine,” said Douglas, a University of Detroit Mercy golfer who prefers par-5 holes. “There were some good birdie chances on the course. I had a good tee shot (which landed on the green) on five. I missed one green on the front nine and ended with 2-over-par. This course is a little shorter than we play in college. Although, there were some real good golfers in this field.”

Robinette finished with 72 Saturday, one better than the previous day.

“I had an opportunity,” he said. “I had a wonderful time being in the mix. It really reminded me of my college days (at Olivet). This tournament was highly competitive. The lead kind of went back and forth through the day which probably helped Bryce a little. Bryce had a bunch of highs and lows but showed the toughness worthy of a champion. Two days ago (Thursday), I said on the back nine there would be movement on the leaderboard.

Rudy Peterson of Terrace Bluff chopped four strokes off Friday’s round, hitting a 71 this time.

“I hit the ball better overall, although I still missed some putts” he said. “I had some good looks but just didn’t hit the shots. The weather was good. It was warm, but not too windy. This was a bit of a learning experience. This is the first multiple-day tournament I’ve played in. It’s hard to compare this with high school, but it’s fun. These golfers are more experienced. Most of them play more conservative and smarter which comes with experience.”

Argall hit 73 Saturday after shooting 72 on the first three days.

“I shot even everyday,” he said. “The greens were fine, although we struggled a little on the front nine. I think a lot of it was nerves. Nobody wanted to three-putt. It’s hard to gain confidence when you know you have to have birdies and you’re not getting it done. Bryce was unbelievable on the last five holes. He struggled on the first 5-6 holes but hung in there. I think this is the fifth time I’ve been in the top 5-6. I can’t complain. I’m happy for Bryce and Rudy. They really played well.”

Argall said he also enjoyed the weather and course.

“This was a fun course,” he added. “This is the best I’ve seen it in a long time. In the last three days, we had a north wind. We had that for 7-8 holes today, then it turned to the south which changed the way we played the course. The weather was absolutely beautiful.”