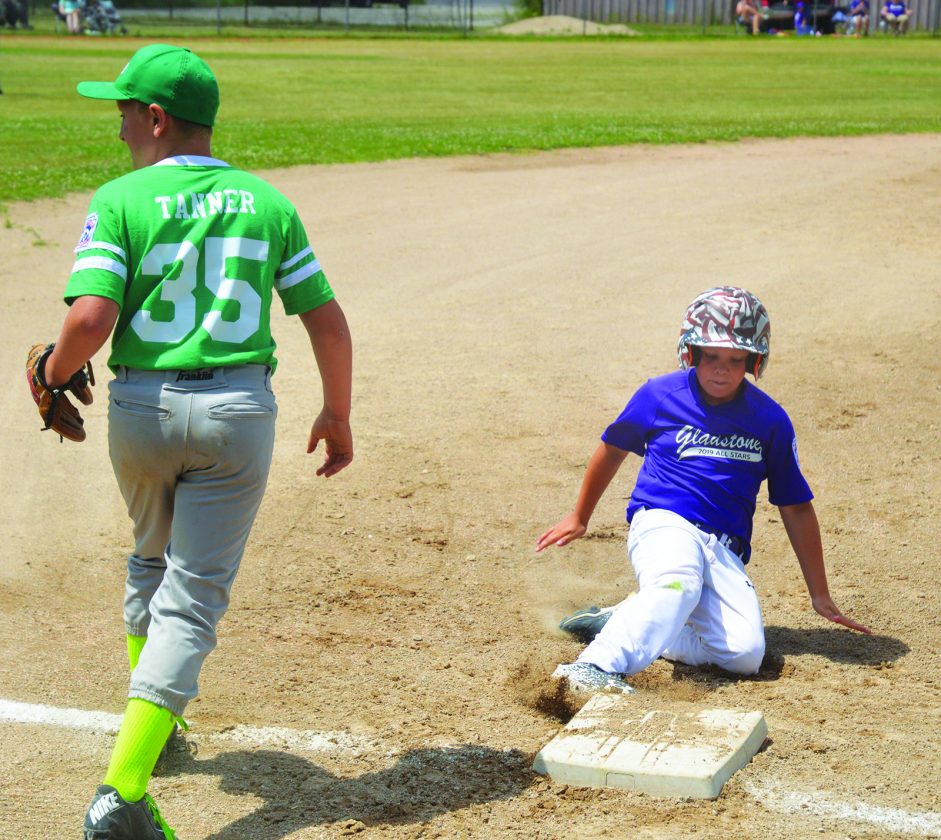 ESCANABA — In an elimination game that went back-and-forth and saw the lead change hands four times, it was Gladstone coming up with the biggest play to top Tri-County 8-6 at Karl Dickson Field here Saturday.

The win sends Gladstone to the Minor Boys’ (age 9-10) All-Star District 10 baseball tournament beginning next Thursday in Escanaba, where it plays Iron Mountain at 7 p.m. Escanaba hosts Kingsford at 5 in the opener.

With runners on first and second, one out and facing a 5-4 deficit in the bottom of the fourth inning, Gladstone’s Braylin Carter ripped a line drive into center field. Quinn Carlson came in to score and the throw from center field sailed over third base, allowing Landon Pepin to score. Tri-County pitcher Andrew Charlebois then held the ball a split second too long after recovering the loose ball, giving Carter the chance to head home and give Gladstone a 7-5 lead.

“Our baserunning was great on that play,” Gladstone manager Mike Sanville said. “Our baserunning was a little bit hesistant the rest of the game, so I’m glad we got everyone moving on that play. It’s always exciting at this age when you get people throwing the ball around. It really gives the crowd a show, so that was definitely exciting. Braylin had a nice hit — a nice hard line drive to the outfield and the baserunners ran, so it was good.”

On the flip side, one play was enough to lose the game for Tri-County.

“One play (was the difference),” Tri-County manager Matt Rondeau said. “Runners were at first and second, single to center field, we froze the runner at third base, we had a held ball, once the held ball was held the kid at third takes off for home and all three end up scoring on one play.”

Gladstone added an insurance run on a passed ball in the bottom of the fifth before Tri-County made one last push in the top of the sixth.

Cy Brunngraeber started the inning with a walk, followed by a sharp base hit by Ryder Kroupa. However, the next three batters all grounded out to shortstop to end the threat with just one run on a fielder’s choice off the bat of Charles Salo.

“The improvement in Tri-County’s program and how they hit the ball is excellent. They came out to play,” Sanville said. “We played a fairly clean game, we had a few errors in there that gave them a few bases, we gave up a few runs early in the game with no hits, but in the end the kids stayed together in a close game. I can’t say enough about the kids and their growth. It’s so much fun to watch how much they’re growing, and it’s a great group of kids.”

Tri-County and Gladstone each scored two runs in the opening frame before Gladstone took a 4-2 lead on Jackson Lee’s RBI groundout in the third.

Tri-County scored three times in the fourth on back-to-back RBI singles by Kroupa and Sam Charlebois, before Sam Charlebois scored on a passed ball to briefly take a 5-4 advantage.

Pepin earned the win for Gladstone, pitching the final two innings in relief of Lee, who pitched the first four frames.

Andrew Charlebois absorbed the loss for Tri-County through 3 2/3 innings, while Isaac Rondeau pitched the final 1 1/3 innings in relief.

“We’re right there with them — this crew will be back when they’re 12,” manager Rondeau said. “These guys didn’t even know each other two weeks ago. Tri-County is a completely different animal than Escanaba, Gladstone or Munising. We’re from towns that are 15 to 20 miles apart, four different school districts, and they got to come play ball together even when they don’t know each other. I thought our pitching did well today. Andrew Charlebois and Isaac both really threw well.”

Gladstone now turns its attention to the District 10 tournament.

“Well, we know there’s going to be four good teams left,” Sanville said. “Both teams from the Iron Mountain area are good teams, and then we have Escanaba as well. It’s going to be a hard-fought tournament, but I think it’s anyone’s at this point. I think any one of the four teams can win this tournament. All these teams good play baseball.

“It’s nice to have it here in Escanaba. It’s great to see the crowd that we have here that comes out. Hopefully, we’ll get a lot more people Thursday to watch both games and cheer on both teams. It should be exciting baseball.”