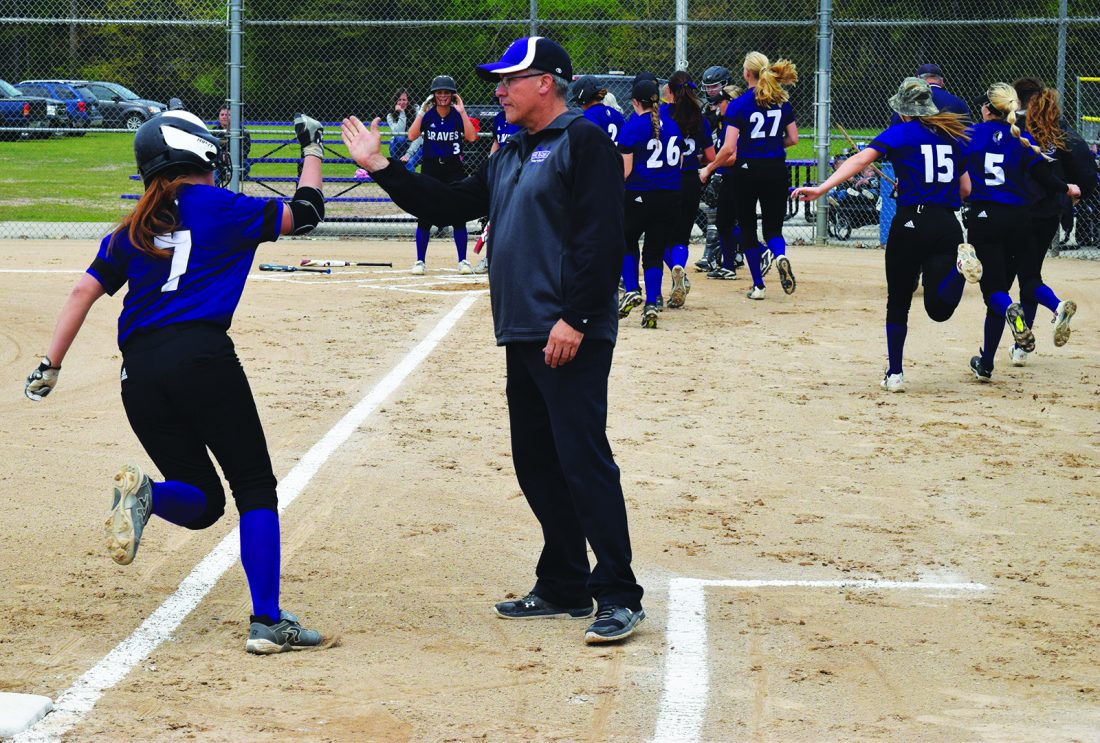 Justin St. Ours | Daily Press Gladstone’s Taylor Trudeau is congratulated by coach John Nevala after a home run against Iron Mountain in the Division 3 district championship Saturday at Gladstone.

Taylor Trudeau led the game off with a solo home run to give the Braves a 1-0 lead. In the bottom of the first, Iron Mountain got two on base but stranded both.

After a walk and a hit batter, the Braves’ Andie Balenger scored Morgan Letteriello on a sacrifice bunt to increase their lead to 2-0 in the top of the second, but the Mountaineers fought back in the bottom half. Anna Rittenhouse crossed home plate to cut their deficit to 2-1.

Gladstone (31-6) loaded the bases quickly in the top of the fourth. Balenger singled on a fly to score Kenzington Pepin, and Maddie Ahlgren scored on a wild pitch just after. Trudeau rounded out the inning with a double to deep left field that scored Marnnea LaFave and increased the Braves’ lead to 5-1. They tacked on one more on in the fifth.

“We initially had a hard time adjusting to the pitching we were seeing,” Braves’ coach Darin Hunter said. “Then when they made a pitching change, it changed the tempo of the game for our batters. They had our batters a little off balance by going through the two different kinds of pitching styles. Eventually, we started getting the bats on the balls better than we were.”

The Mountaineers (20-12) added one more in the sixth thanks to Annslee Runsat singling to score Rittenhouse.

“This was another outstanding performance from our pitcher,” Hunter said. “Our catcher had some nice plays too. Our defense really shined, and we made the plays that we needed to and were expected to.

“(The district championship) is a streak that’s been going for the last 16 or 17 years. That’s at least the beginning of the bar and the standard we set. We want to keep that streak going. We’ve lost regional games, but the streak for the district titles, we’ve held. We wanted to make sure that the girls were prepared, that it wasn’t a given coming in. You have to come in and play the game — it’s not a given.”

Balenger earned the win for the Braves, allowing five hits, two walks and two runs while striking out seven. Trudeau led the offense with two hits, two RBIs and one run. Letteriello also finished with two hits and one run, while Jenna Tardiff, Sydney Herioux and Ahlgren all collected one hit.

Hannah Proudfit took the loss for the Mountaineers over 2 2/3 innings. She allowed five hits, six walks and five runs. Claire Mongrain pitched 4 1/3 innings in relief, allowing two hits and one run. Ella Fortner, Saylor Swartout and Mackenzie Swanson all finished with one hit. Runsat collected one hit and one RBI, and Rittenhouse notched one hit and two runs.

“We didn’t commit errors. Normally, we commit a lot of errors,” he said. “That’s always been a challenge. I challenged them today and said, ‘good things happen when you cut down on errors’. At least you’re in the game that way. We were hitting the ball. It was just that we couldn’t get the runners around.”

“With seven seniors, it’s a little sad saying goodbye to those girls,” Lefebvre said. “They’ve been with me all of the four years they’ve been here, so you kind of develop a bond.” 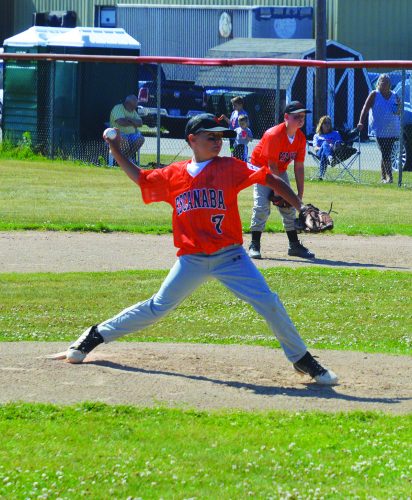 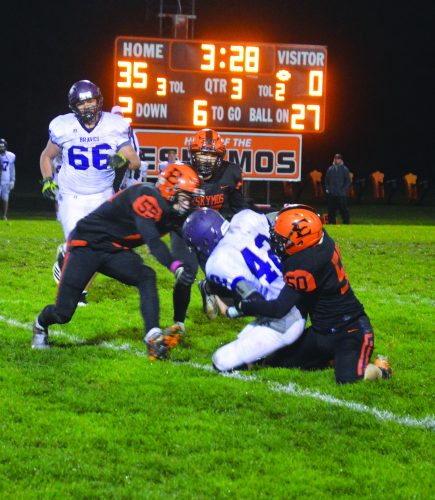