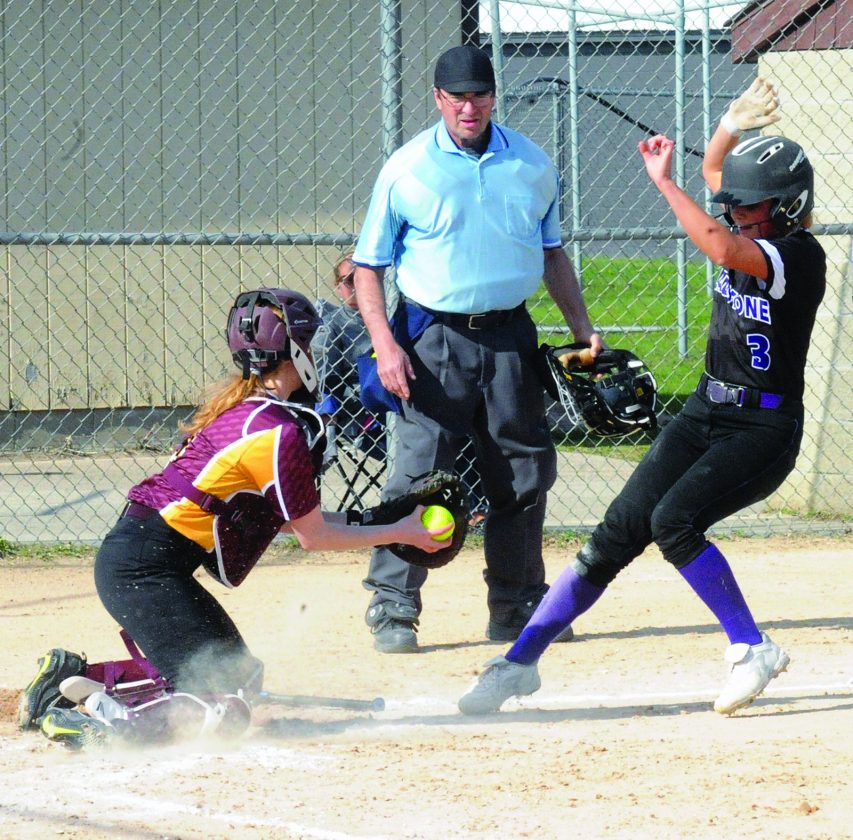 Brian Bell | Marinette EagleHerald Gladstone’s Jenna Tardiff hits the brakes as Menominee’s Hannah Ries attempts to tag her out in Wednesday’s game in Menominee. Tardiff was tagged out at home after getting into a pickle.

MENOMINEE — Andie Balenger threw a three-hit shutout for Gladstone as the Braves came to Menominee and won a Great Northern Conference game 8-0 on Wednesday.

Gladstone started off the game with two runs in the first inning. Taylor Trudeau doubled to lead off and was singled in by Jenna Tardiff. Menominee starting pitcher Izzy Berger forced two straight groundouts to third, but Tardiff was brought home on a single from Morgan Letteriello to take a 2-0 lead.

Both teams were scoreless in the second inning, but the Braves nicked Berger for three more runs in the top of the third.

Tardiff led off with a single and scored on Sydney Herioux’s single. Herioux scored on a passed ball and Taelor Zeise was walked and later scored on a fielder’s choice that allowed Natalie Hansen to reach first base with one out. The next batter flew out to Menominee center fielder Ashly Powell, and Powell noticed Hansen broke for second on contact so she gunned the ball from center to first to complete a double play and get out of the inning.

Menominee’s best opportunity to score came in the bottom of the fifth when Hannah Ries drew a two-out walk, Erin Barrette singled behind her and Sarah Barrette walked to load the bases. Balenger was able to end the threat with a strikeout to preserve the shutout.

In the top of the sixth leading 6-0, Gladstone capped off the scoring with two runs. Balenger led off with a single, Trudeau drew a one-out walk and Herioux hit a two-RBI double.

The Maroons had runners on first and second with one out in their half of the sixth after Powell singled and Berger drew a one-out walk, but Balenger struck out the next two batters to put her total at nine for the game. She notched her 10th strikeout when she came back out in the seventh to close out the game.

Berger took the loss for Menominee, pitching all seven innings and allowing eight runs on 13 hits with two walks and one strikeout.

The Maroons go to Escanaba today for a doubleheader at 4, while Gladstone is at Esky on Tuesday.