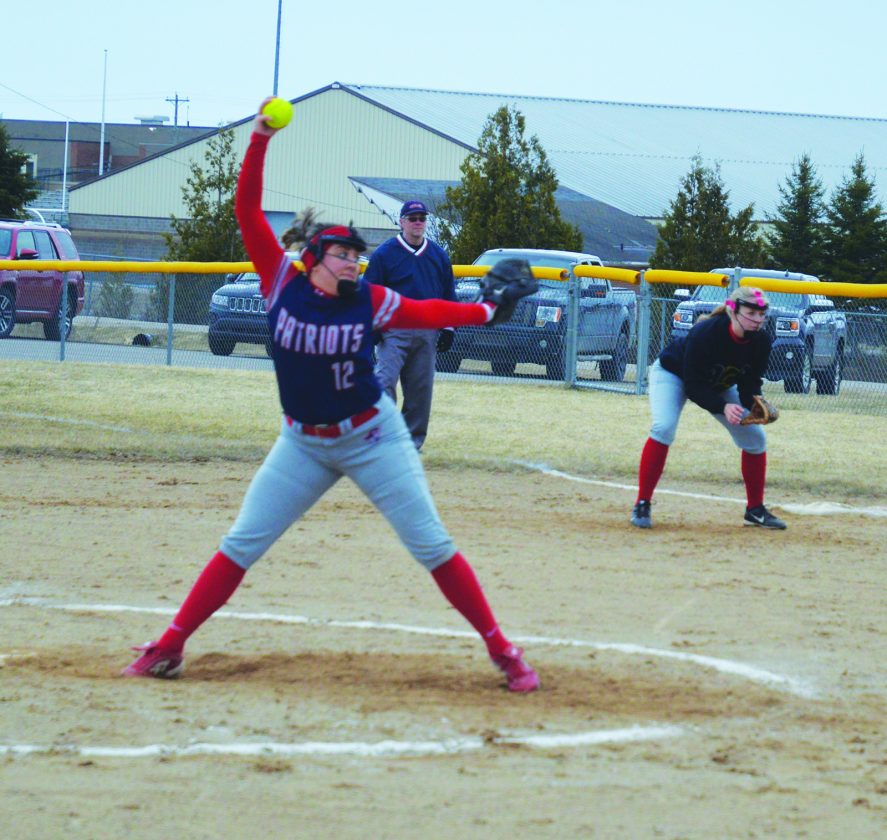 A few Emeralds’ runners reached base on walks or an error, but none were able to get a hit in the Mid-Peninsula Conference opener for both teams. Patron was congratulated by coach Jared Koski and her teammates when Koski announced she had just thrown her first no-hitter after the game was called after five innings due to a mercy rule.

“I’ve come close to a no-hitter before, but this is my first one,” Patron said. “I feel good.. I feel like because I’ve worked really hard at pitching and softball in general, being able to throw a no-hitter makes me feel like my hard work has paid off.”

She cited she thought the wind helped her get more movement.

“I think the wind helped because I could spin my pitches a certain way and it made my pitches spin faster… so I could get a lot of movement on my pitches.”

“She was really hitting her locations and the strike zone was a little bit different than what she expected,” he said. “She really likes to rely on the low pitch a lot of times, but she made an adjustment right away after throwing some pitches that are accustomed to her thinking they’re strikes.”

Patron said the no-hitter possibility wasn’t even on her mind until Koski brought it up in the third inning.

“I didn’t even realize it. I was thinking about it a little bit in maybe like the third inning when coach Koski said something about them not having a hit yet.”

The next goal for the junior?

“A perfect game, definitely” she said.

Koski said the Patriots (1-0 M-PC) have relied on her in the past and will continue to rely on her moving forward.

“She’s pitched a lot of games in her career. She’s really the staple of our pitching program at Westwood right now and we’re gonna use her to be our primary pitcher most of the time. It was a joy to be able to watch her do that. She was looking today on the mound and she was feeling good,” he said.

It was also the first conference win for the Patriots’ new coaching staff.

“This the first conference game our coaching staff has ever coached. It’s like hitting a home run in your first at-bat.. now what? It was great to see and great to be a part of,” Koski said. “All the other girls came off the field and I said to them, ‘do you guys realize what just happened? We pitched a no-hitter,’ and they were like ‘all right, Karlie!’ We didn’t even talk about it during the game, and all of a sudden, boom — there it is.”

The Emeralds (1-3, 0-1 M-PC) struggled to get much offense going under first-year coach Hank Richey.

The teams attempted to start a second game, but it was called after almost two innings due to rain. The Patriots led 6-4 when play was stopped.

“They stuck with it. They had some good hacks at it, but we didn’t hit the ball like we did in the dome. She’s a good pitcher,” coach Richey said. “Of course, our defense did have some more errors today that gave up some runs. We’re gonna have to try to slow that down and play our game. We need to control what we can control.”

Koski was complimentary of Manistique’s pitchers, and also thought his team maximized its scoring chances.

“Our girls were able to make contact and hit the ball into the field — a lot of nice line shots, balls hit in between the fielders, and good baserunning. I felt like our girls did a good job taking extra bases when they were there and manufacturing some runs that wouldn’t have been there if we were just standing around and watching instead of being aggressive on the bases.”

Coach Richey thought his team loosened up in the second game.

He was also glad just to play a game outside.

“I’m just glad we got it in because we’ve been wanting to get on the field and play some games for over a month now. The dome was fun, but this is the real stuff playing in the elements,” he said.